In Defense of the Jason Bay Trade

Share All sharing options for: In Defense of the Jason Bay Trade 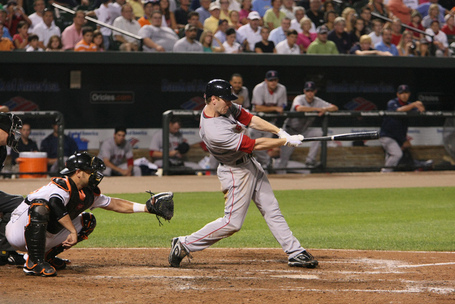 There's a really interesting and somewhat maddening discussion in the Post-Gazette's Q+A today:

Q: Is it smart for the Pirates to be avoiding free agents and targeting prospects?

In honor of 'Moneyball' and its premise that teams like the A's (and Pirates) need to take advantage of the market: The value of top prospects has never been higher as teams see how cost-effective they are compared to veterans. Teams are hoarding them and won't part with them even for Johan Santana or Jason Bay, crossing off their top five in trade talks. How did the Twins not get the Mets' top prospect for the best pitcher in baseball?

...Everybody was shocked when the A's started trading prospects for superstars such as Matt Holliday and targeting free agents such as Rafael Furcal. But they are once again playing the market, selling prospects high and buying free agents low (they offered less than $10 million per year to Furcal).

Since the Pirates have some money to spend, why not target two younger free agents, sign them for four years, and try to bring them in at a good value?

I've excerpted the question here because of fair-use reasons, but you should read the whole thing, if you haven't already. There's something important and true at the core of the question, which is that this is a very bad time to trade for prospects.

Missing from Dejan Kovacevic's answer is the obvious point that the Pirates are trying to trade for prospects not to take advantage of market conditions, but because they have to. I'm all for exploiting the market, but if you do that instead of pursuing broader franchise goals, you'll end up with a mishmash of mismatched talent.

Kovacevic continues to wish the Pirates had only made the Xavier Nady / Damaso Marte deal and to criticize the team for trading Jason Bay for Andy LaRoche, Craig Hansen, Brandon Moss and Bryan Morris instead of keeping Bay and signing him to an extension. This position might be easier to accept if Kovacevic had advanced it at the time of the trades, but as far as I can tell, he didn't. (To be fair, I don't remember him praising it, either.) In fact, the reaction to the trades at the time, not from Kovacevic but from the most knowledgeable fans and analysts, was that the Bay trade was the good one and that the Nady/Marte deal left something to be desired. (For what it's worth, I liked them both.) To criticize the Bay trade only now, after watching LaRoche flounder with the Pirates, seems unfair.

At the time, it looked like the Pirates were getting a starting third baseman who was available only because the flighty, fickle Dodgers were completely uninterested in him; the Dodgers messed with him in pretty much every possible way while he was trying to break in. So the Pirates were getting a player who, by all appearances, was badly undervalued by his team. The idea that the Dodgers "cross[ed] off their top five in trade talks" is simply wrong: Minor League Ball ranked LaRoche the Dodgers' second-best prospect before the 2008 season. Baseball America ranked him first in 2007 and second in 2008. Baseball Prospectus ranked him second in 2008. If Kovacevic has any information the Pirates should have had about LaRoche's tenure with the Dodgers organization that contradicts the glowing reviews, I don't think he's shared it.

Judging from LaRoche's weirdly awful play after the Pirates acquired him, it may well turn out that he never lives up to the promise that others saw in him. But there's still the fact that nearly everyone thought otherwise. Even Kovacevic reported that right after the trade, he got several texts from employees of other teams who were pleasantly amazed at the return the Pirates got. If the Pirates thought they were getting a guy who'd put up a .500 OPS rather than a guy who was well-liked by... well, pretty much everyone, they wouldn't have made the trade.

So the Bay trade just wasn't a case of the Pirates agreeing to take second-tier talent for their best player, and it's revisionist history to say it was. LaRoche was almost universally regarded as a high-upside player, and Morris, a former first-round pick, was pretty well regarded too.

To move away from that argument for a second, there's also this:

Once management saw that the offense, chemistry and some other elements looked to be in place last summer, maybe there could have been an adjustment to the pre-ordained Bay-must-go plan. They could have capitalized on the kind of thinking that you describe, going for legitimate value through free agency and waiting until the cycle changes to try to pry away other team's top prospects.

With all due respect to Kovacevic, there are many problems here. First, the Pirates' solid offensive performance in the first half last year was built entirely around excellent performances by Bay, Nady, Nate McLouth and Ryan Doumit. There was literally nothing else to it. Nady was playing out of his mind, and the Pirates dealt him at midseason in a trade Kovacevic supports. So in Kovacevic's ideal world, he'd be gone. Bay was nearing 30, played bad defense, had had injury problems, and was coming off a terrible year. That he would continue to hit was far from a foregone conclusion. McLouth was in the midst of a career year. And Doumit was both in the midst of a career year and also had the durability of a balsa wood airplane. That was it; those four players were the only guys who did anything on offense in the first half. So, even granting the possibility that Adam LaRoche would have another late-season surge, the likelihood that the 2008 offense would continue to be a good one was remote, especially with Nady and his career half-season gone.

Then there's the fact that the Pirates weren't even playing well even with these four guys hitting like crazy, because they allowed so many runs. They allowed these runs in part because there wasn't enough pitching talent and almost no pitching depth, but also in part because their defense was among the worst in baseball. Bay and Nady were big parts of that, and defensive statistics suggest that McLouth was too. (I'm not sure I agree about McLouth, but at least I'm pretty sure he wasn't part of the solution.) Some Pirates pitchers were underperforming, yes, but an even bigger problem was that their defense was giving them nothing to work with.

So while it appeared that the 2008 Pirates had a good core of position players in place, what was really happening was that the position players looked strong because they were like vampires sucking the blood of the pitching staff. Turning the 2008 Pirates into a competitive team was not simply a matter of improving the pitching to match the solid performances of the hitters. Some of the hitters were major obstacles to improvement by the pitching staff. This wasn't a team that required a couple little adjustments. It was a team that was a mess pretty much everywhere.

Then there's the idea that "there could have been an adjustment to the pre-ordained Bay-must-go plan." Well, actually, there was. The Pirates wanted to trade Bay during the 2007-2008 offseason, but they didn't, because they couldn't get anyone to give up good prospects for him. (They were, ironicially, reportedly offered Cliff Lee, who just looked like a salary albatross at the time--everyone would have hated Neal Huntington if he had made that trade.) Lee's surprise performance aside, Bay's value on the market was extremely low, so they held onto him until he reclaimed some of his lost luster in his comeback season in 2008.

Holding onto Bay longer than the 2008 deadline and then trading him when the market improved would not have been a good idea. One problem is when, exactly, they would've traded him. Now we're in the 2008-2009 season, and the market for vetrerans still has not improved; in fact, it probably is worse than it was a few months ago. Bay would have been eligible for free agency after 2009. The Pirates would be very unlikely to get much more than they got for Bay if they waited until the 2009 deadline to deal him. That's the last chance they would have gotten.

Unless, of course, they signed Bay to an extension, which would've been problematic for a number of reasons.

First, they would've had to pay him a lot of money, which would make him less attractive on the trade market.

Second, they would've faced diminishing returns. After the 2009 season, Bay will be 31. He already plays bad defense, runs like he's hurting (although he's still an effective basestealer), has had knee trouble, and had one terrible season. He isn't likely to have a strong second act.

Finally, what good does an aging and expensive veteran do on a team that's trying to rebuild? Kovacevic rightly points out that there's value to fielding a competitive team while you rebuild, but Bay's contributions to the team's competitiveness would probably diminish over the course of the contract, and the deal might well become an albatross just as the Pirates were finally about to become legitimately good. If signing Bay to an extension would cost the Pirates, say, $12 million in 2012, I'd much rather have the flexibility to decide later where that $12 million goes.

The real problem here seems to be that Kovacevic doesn't much like the Bay trade. Which is fine. I don't like it much now either. But the problem is that LaRoche now seems to be less than he appeared, not that the deal was a bad one at the time. And to frame this issue in terms of the market is too clever by half. The Pirates aren't grabbing prospects now because they regard that as a strong position in the market. They're grabbing prospects because that's what teams in their position need to do. It's true that I recently said the Pirates should consider holding on to Jack Wilson if they don't get a possible starter in return, but the Pirates did get two high-upside players for Bay. Generally, that's the sort of trade the Pirates need to make, and if they can get a player with some upside for Wilson, they should deal him also.

Without meaning to offend here, because obviously the comparison I'm about to make only applies in the most abstracted way, I'm reminded of a skit on a sketch comedy show--maybe it was In Living Color?--that mocked some sort of legislative proposal to give laptops to the homeless. In the skit, a homeless person opens his laptop, and attempts to warm himself by the light of the screen. (Whatever this skit was, it was written before the internet was widely accessible--the homeless now benefit greatly from the use of computers.) The point is that Pirates have plenty of other, more basic, needs to address before they can worry about keeping someone like Bay, and the market would have to get to a really extreme state for that not to be true. He's a luxury item, and the Pirates are still trying to get basic necessities like food and shelter. They need those before the stuff further up the pyramid will have much value to them.

UPDATE: WHYGAVS and Pittsburgh Lumber Co. agree with me.