Share All sharing options for: Things I Believe, Part 2: the Class of '05 and the '08 Offense 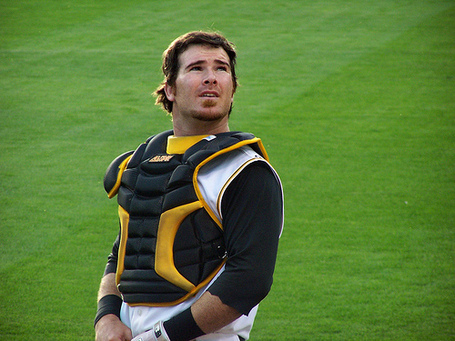 This is the continuation of a series begun here, mostly for the purposes of informing new readers about what goes on here at Bucs Dugout. My hope is that readers will follow my arguments more easily if I explain some of the ideas that inform them.

6. Aging is tough. Conventional sabermetric wisdom holds that the average peak age of a baseball player is about 27, although some have argued it's actually a bit later. Either way, most players are in the big leagues precious few years before they start to go downhill. The aging pattern is particularly cruel to mediocre players. It is not uncommon for players to peak in their early 20s, or while still in the minor leagues. (This may or may not have happened to Steve Pearce in his standout minor league year of 2007, when he was 24.) These tendencies make rebuilding a very tricky enterprise, but it's actually pretty convenient for teams like the Pirates that these trends exist--by the time a player has enough service time to reach free agency, he's probably already past his prime. For example, take the position players who got their first sustained burst of major-league playing time for the Pirates in the 2005 and 2006 seasons. These players included Ronny Paulino, Humberto Cota, Ryan Doumit, Brad Eldred, Freddy Sanchez, Jose Bautista, Chris Duffy and Nate McLouth. These players, as a group, weren't actually all that young--most of them were in their mid-20s by the time they arrived. So it's no surprise that many of them are already gone. A look at their likely peak ages may surprise some readers.

It is possible that some of these players haven't had their career years yet, but that looks unlikely, and the only ones who could reasonably be described as still on the upswing are Doumit and McLouth. It might look like the Pirates got unlucky with these players, but actually that isn't true--most of them just weren't very good, and on the whole their peaks occurred at around the standard times for players of their skill level. The problem was that they weren't particularly young when they arrived, so they had a limited amount of time to get where they were going. The Pirates thus got these players' best years at very cheap prices. The problem was that they simply weren't good enough.

8. Fans who aren't on board with points 6 and 7 tend to overestimate their favorite teams. A couple weeks ago in the semi-infamous Jason Bay post, I responded in part to a claim over at the Post-Gazette that "the offense... looked to be in place" before the Bay and Xavier Nady trades last summer. Not to pick on the Post-Gazette, but I'd like to explore that idea further.

There were, I thought, a couple things wrong with that statement. First, the position players who were scoring runs on offense were causing problems on defense, and thus were not as good as their stat lines made them look. Second, and perhaps more importantly, the early-2008 offense was built almost entirely around Bay, Nady, McLouth and Doumit. Three of those guys were in the midst of what might well have been career seasons, and thus were due for some regression to the mean. And, in fact, they all experienced it as the season wore on.

Nady, after being traded to the Yankees, immediately returned to being regular old Xavier Nady. Doumit and McLouth tailed off down the stretch.

Of course, this doesn't mean that I think these guys are bad players. Far from it, and I think the extension the Pirates gave Doumit was a good idea. But it does mean that you can't count on a player who's suddenly excellent to continue being excellent. Doumit's age (27 last year), injury history, position (catchers age poorly), and brilliant hitting in the first half of 2008 make it somewhat unlikely he'll ever top his 2008 season.

One might point out here that although the Pirates were getting surprising seasons from Nady, Doumit and McLouth in the first half of 2008, Freddy Sanchez and Adam LaRoche had done nothing up to that point, and thus the Pirates might be expected to sustain their offense with contributions from those players even if Nady, Doumit and McLouth faded. Well, fair enough, and in fact Sanchez and LaRoche were very good in the second half.

But to suggest that the offense was "in place" in any meaningful way--keeping in mind that the Pirates needed to look past 2008 to a time in the future when they could compete--ignores point #6. Aging patterns are cruel, and the general tendency of baseball players is to get worse, not better. The players around which the Pirates' early-2008 offense was based were already in their late 20s or early 30s. In two years, they probably won't be nearly as good as they are now. The Pirates' pitching was terrible last year and needs time to improve. Expecting the Bucs to retain their offensive players and wait for pitching would be a very bad strategy that would result in perhaps one decent year in a best-case scenario and, more likely, several more years of failure if it didn't work. And even that best-case scenario assumes that Bay and LaRoche would stick with the team instead of becoming free agents after 2009 anyway.

The mistake I think the Post-Gazette is making is assuming that the good things will stay the same, and that the bad things will get better. Fans often do this kind of thing, and occasionally they turn out to be right, but the more likely scenario would have been that the pitching would get a little better, and the hitting would get a bunch worse as the result of regression and of players aging. Major league baseball players are fleeting things, and it's unwise to expect aging players to stay the same or get better.

That sounds pessimistic and mean, but again, keep in mind that it would not be possible for the Pirates to compete if this weren't true. The Pirates can pay players with less than six years of major league experience bargain prices. If players tended to peak in, say, their ninth year in the big leagues, the Bucs really would not be able to enjoy the best years of a Nate McLouth or a Jason Bay. But because players peak so soon, they can. So they'll be able to compete once they get the right core of young players.