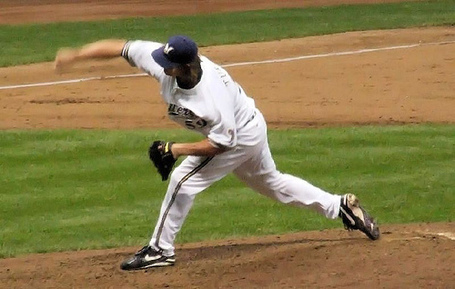 Just imagine the sound of the ball as it whizzes over Doumit's head (photo: Runaway Wind)

This should have been predictable:

The Pirates are in discussions with free-agent reliever Derrick Turnbow...

By mid-July, he stopped pitching and, at month's end, was diagnosed with a slight tear of the labrum in his right shoulder. He chose rest over surgery.

When healthy, Turnbow is a flamethrower with a 97-mph fastball, the primary reason he has 265 strikeouts in 257 2/3 career innings. But he always has had a wild component, as evidenced by 168 walks.

Pirates general manager Neal Huntington has displayed a liking for power pitchers in the bullpen, even if they have a history of struggling with control, including his trade acquisitions of Tyler Yates and Denny Bautista and the Rule 5 draft selection of Evan Meek.

...Not to mention the acquisition of Ross Ohlendorf (a hard thrower who's had control issues in the majors, though not really in the minors) and especially Craig Hansen in July.

At some point, it's fair to wonder what's driving Neal Huntington here--could he legitimately make a good case that there's some market inefficiency to be exploited by grabbing all these guys who throw hard but have no idea where the ball is going? Or does he really just love high numbers on the radar gun? It's true that lots of good relievers throw hard, but there are also plenty who don't--think of Trevor Hoffman, Chad Cordero, Chad Bradford, Keith Foulke, Eddie Guardado, Jamie Walker or Pat Neshek. It is a myth that a pitcher needs to throw hard to be successful as a reliever, or even as a closer.

I don't mean to downplay the importance of velocity here; obviously, throwing hard can be a very useful skill, and I wouldn't want Huntington running around collecting Brian Rogers types who couldn't break poster paper with their fastballs. Also, if a pitcher starts to lose velocity, there may be reason to worry. And believe me, I like a radar gun reading in the high 90s as much as the next guy.

But Huntington is trading in a skill that may be even more fundamental--the ability to throw strikes--to get all this velocity. If a pitcher can't throw strikes, his fastball isn't worth anything. Look at the pitchers who threw their fastballs hardest this year. There aren't many relievers on that list who figured out how to turn raw velocity into results as they got older, unless the reason they didn't get results at first was because they were starting and then moved to the bullpen. There's Matt Thornton and J.J. Putz. If you're feeling generous you could put Francisco Cordero on that list, too. A lot of the other pitchers followed a pretty typical development curve until their mid-20s and then been either good, or inconsistent, or bad throughout their careers.

To a certain extent, I think acquiring very young pitchers who have a lot of velocity but no real idea what to do with it makes a certain amount of sense. (Of course, most teams value those sorts of players, so they're not incredibly easy to acquire.) Hansen, who recently turned 25, is right at the tail end of being young enough that he's an interesting gamble. So was Evan Meek when he was acquired.

Turnbow, though? Yates? Bautista? I realize that Yates had a decent strikeout rate with the Braves in 2007 and that the prices for Bautista and Turnbow were, or are unlikely to be, high, but those pitchers are old enough that the chances they'll turn it around really are remote. If there's some competitive advantage to be gleaned by grabbing guys like Turnbow instead of actual pitchers, I don't really see it.