Share All sharing options for: Maybe the Pirates Should Keep Jack Wilson 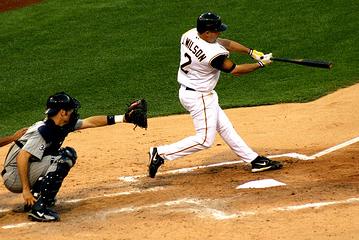 To get right to the point: I've never been a huge Jack Wilson fan, and I think a big chunk of the Pirates' fanbase has consistently overrated him, and at this stage, I generally think the Pirates should trade players like Wilson. In fact, I think trades of veteran players are key to the Pirates' long term success. I think the Pirates should shop Wilson aggressively and should be willing to pay part of Wilson's salary if it increases their prospect haul. But perhaps now simply is not the time to trade him.

Detroit is believed to be willing to part with two prospects in a deal for Wilson, but not much more. The Tigers hold a number of young outfield prospects, though that's not the Pirates' most immediate need. Detroit doesn't seem to have a significant pool of pitching prospects available for the taking, and even a young shortstop could be hard to pry away from them.

With [Cale] Iorg being groomed as the Tigers' next shortstop, the Pirates could possibly lure Detroit's other top shortstop prospect, Danny Worth. But such a deal would have to include more than just Wilson from Pittsburgh.

Thoughts like these have cropped up in several places recently. I don't understand them.

Before I begin to explain why, let me say that I don't care to examine this deal from Detroit's perspective. That is, it doesn't matter to me whether Cale Iorg or Danny Worth for Wilson would be good trades for Detroit. My personal opinion is that they would be, but that's not my point. My only concern here is whether these deals would be good for the Pirates.

Let's first dispense with the idea that Iorg or Worth are "top shortstop prospects." To be fair, the article quoted above probably just means they're Detroit's top shortstop prospects, but just to resolve any amiguity: until they prove themselves on the field, these guys are fringe prospects, and only it Detroit's depleted farm system could they appear otherwise. It's perplexing that they keep coming up--that people think the Pirates would want either of them as anything other than a throw-in, or that Detroit would be unwilling to part with them.

Worth is already 23, didn't hit in 2007 at Class A+, and wasn't much better last year at Class AA. True, 2008 was only his second professional season, but he comes from a major college program (Pepperdine), isn't terribly young, and hasn't shown much of an ability to hit for contact in the pros. Or much power, for that matter.

Iorg, also a 23-year-old 2007 draftee, played last year at Class A+ and hit for better power than Worth did, but he also hit only .251 and had strikeout issues. The standard line about him is that, because he spent two years away from baseball on a Mormon mission in Portugal, he has some upside that his performance record disguises. It's true that some players (like Jason Bay, who came from Canada rather than from a warmer climate with year-round baseball) legitimately do develop later than others because of their backgrounds, but nine times out of ten these excuses turn out not to matter, at least not about players who are already 23. They're just noise. Anyway, Iorg didn't improve as the season went on last year (he had a .762 OPS before the break and a .692 OPS after), so there's no statistical evidence to support the idea that he's learning as he goes. That doesn't mean he isn't or that he won't break out next year, but I wouldn't hold my breath.

Also last week, Ken Rosenthal reported that the Dodgers "balked" at the Pirates' offer of Wilson for Chin-Lung Hu, Delwyn Young and a third prospect. As I said at the time, maybe the third player was someone so good that the Dodgers had to pass. But if it was someone along the lines of Hu and Young, I don't know why the Dodgers would have said no (unless they just wanted more time to see how the market developed). Hu is Jack Wilson-lite in the best of circumstances, and he's coming off a very poor season (again with an excuse, which is that he had vision issues); Young is a AAAA player. If the offer was Hu, Young and someone about as good, I can't believe the Pirates would want that package or that the Dodgers would pass.

The Post-Gazette later reported that Hu would not be the "centerpiece" of any Wilson deal, fortunately. But the names that have floated around as possible returns for Wilson are all incredibly depressing. Worth, Iorg, Hu and Young all look like role players to me. If the market is such that even these guys are out of reach, there's no trade for the Pirates to make here.

If all the Pirates can get back from Wilson is role players, they should keep him. The step down from Wilson to options like Brian Bixler is a steep one; we all saw how the Pirates' shortstops played last year after Wilson got hurt. Why should the Pirates give up a popular and useful player if they don't get any kind of upside in return? The only logical answer to that question is "to save money," and that's not an answer I will accept. The Pirates' 2009 payroll already looks like it will be very low.

The Pirates should have dealt Wilson for Jair Jurrjens when they had the chance. Wilson had a worse season in 2008 than he did in 2007, and his contract, which went from dumb to perfectly reasonable as teams shelled out big bucks for free agents last offseason, now looks (mildly) unfavorable again. The Pirates, who don't have a lot of huge contracts on the books, can pay Wilson. Unless they can get someone who projects as a potential starter, he should play for them again in 2009.