It's in the Minors

Share All sharing options for: It's in the Minors 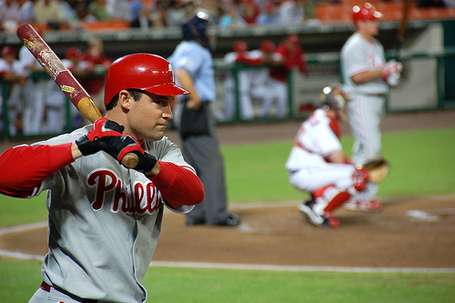 Why didn't the Pirates just give this guy seventeen million? (Photo: Scott Ableman)

I can't blame any fan for being frustrated with the Pirates' losing ways, because we're all frustrated. But I still find this letter a little annoying.

I believe the Pirates are doing a wonderful job at PNC Park to provide an entertaining venue. However, they have not provided a competitive baseball team to watch at the park. While much of the blame for this problem can be placed on past management, the current management does not appear to have taken a course that is much different. Current management's resistance to throwing away money in the free agent market is encouraging. However, free agents in whom the Pirates have shown interest since the end of the 2008 season appear to be of the same caliber of talent as the free agents of the past - players that few, if any, other teams are really interested in. What's worse, the trades that were made last summer removed proven talent for prospects who have not shown promise.

These views are shared by many Pirates fans, perhaps now a majority. For the most part, they're based on a massive disconnect between where fans expect results and where, at this early point in the tenures of Frank Coonelly and Neal Huntington, we could reasonably expect to see them.

I think we all can agree that, regardless of how you feel about the Pirates' spending habits, the fortunes of a team in the Bucs' position are closely connected to its minor league system. Strangely, though, I don't think I've seen a rant like the one above that really addresses the minor league system at all.

Dave Littlefield's reign of error at the big-league level has been well documented. But he was no less awful at the minor league level, and by the end of his tenure he was essentially behaving like he thought the team would be contracted. He picked Daniel Moskos over Matt Wieters, passed over high-upside players late in the draft, ignored Latin America, ignored the back end of his 40-man roster, ignored the issue of depth. He behaved like nothing that happened after 2009 mattered. Despite a horrible farm system and no immediate chance of contending at the big league level, Littlefield took a reliever with the fourth overall pick of the 2007 draft. Think about that. Contemplate it. It's staggering.

In the early 2000s, the Montreal Expos actually thought they might be contracted. In that time and in the weird years that followed, they traded Grady Sizemore, Cliff Lee and Brandon Phillips for Bartolo Colon. They traded Chris Young (the pitcher) for Einar Diaz (who, incidentally, has the weird distinction of being traded not only for Young but for Travis Hafner). They traded Jason Bay for Lou Collier. They used first-round draft picks on Chad Cordero and Bill Bray (neither of whom are terrible pitchers, but they're both relievers). They let Vladimir Guerrero leave and didn't offer him arbitration. As a result, when the team relocated to Washington, it had a terrible farm system and little at the major league level. They had a hole they're still trying to dig their way out of, four years later.

The Pirates team Coonelly and Huntington inherited was really no better. There was just one potential impact player in the farm system (Andrew McCutchen), a perennial 67-win major league team, and a general lack of good young players anywhere in the organization.

There was no realistic chance the Pirates could have built a playoff team with the core that was in place. None. It was a mismatched team--an awful defensive team with a bunch of mediocre starting pitchers who pitched to contact. However encouraging the offense's start in 2008 may have been, the bushels of runs the Pirates gave up said much more about their future than the hitting did. The Bucs' pitching wasn't good, but the hideous defense, provided (of course) by the same players who'd suddenly made the offense look palatable, made the pitching look far worse than it actually was. The defense was awful at converting balls in play into outs. This isn't my opinion; this is a fact. And the pitching staff allowed tons of balls in play. If you were trying to build a bad team, the 2008 Pirates' combination of defense and pitching would be a great start.

I simply don't see any way around this. You can blame the Pirates' balls-in-play issues on guys like Zach Duke or Tom Gorzelanny somehow magically turning everybody into a great hitter, and there's no doubt that neither of those guys were great pitchers in 2008, but all the evidence, from the Pirates' defensive efficiency to things like those pitchers' line drive percentages and ground ball rates, suggests that the defense was a huge part of the problem.

The 2008 Bucs could not have become a contending team with a couple of better seasons from some underachieving pitchers. That wasn't the issue. The team simply wasn't good enough and wasn't constructed in a way that made any sense. And the total lack of depth in the farm system, along with the fact that many key players were already at their peak age and would become free agents after 2009 anyway, ensured that things only would have gotten worse if Coonelly and Huntington stood pat.

As for the Pirates' minor league system, consider that Littlefield managed to torpedo the short-season State College Spikes in 2008, nearly a year after he was fired. It sounds weird that a guy who hadn't been GM for a year could have much to do with a short-season team that mostly exists because recent draftees need a place to play, but nonethless, Littlefield managed to kill that team. There were other circumstances that didn't help, but mostly, the Spikes' awful record this year was the result of Littlefield's terrible drafting and indifference to Latin America. It's hard to underestimate how pervasive Littlefield's influence was, and how deadly. The minor league system Coonelly and Huntington inherited was nothing short of a disaster.

Given the unavoidable connection between minor-league strength and major-league strength, Coonelly and Huntington's only responsible choice was to rebuild the minor leauge system, and that is exactly what they have sought to do. The letter writer's claim that "While much of the blame for this problem can be placed on past management, the current management does not appear to have taken a course that is much different" only reveals, to me, that he probably doesn't read the paper he's writing to. For example, he'd only need to check this article about Latin America or this article about the draft. Things are obviously different, and if fans can't see it, it's because they don't understand the scope of the problem Coonelly and Huntington inherited, or aren't willing to accept that the minor league system has to change before the big-league team can meaningfully change.

I bet the writer of the letter is guilty of the latter. The author praises the Pirates for avoiding the free-agent boondoggles of the Littlefield years (I assume he means people like Jeromy Burnitz) but blames new management for pursuing players few other teams would want.

Well, first, what desirable player would want to play for the Pirates unless the Pirates offered him substantially more than his market value? Pat Burrell signed with the Rays for $16 million, but there isn't a chance he'd come to the Pirates unless the Pirates offered substantially--substantially--more. I don't know that for sure, but I know that for sure. And beyond the fact that having Pat Burrell would be cool, what does a player like that have to do with the Pirates' long-term plan? He wouldn't put the Pirates over the top. Other teams should want to pay more for desirable free agents than the Pirates do, because the value of an extra win is a lot greater for an 85-win team than it is for a 67-win team. A playoff appearance brings in money, so teams that are very close to that threshold are the ones that should be spending big on free agents.

I know most Pirates fans don't really care about the dollar value of a win, and to a certain extent, they shouldn't. Money is the owner's problem, not ours. But the Pirates are right to avoid expensive free agents, for whom they'd have to overpay, probably with long commitments. Think of it this way: if it's the end of the 2011 season and a core of players led by Pedro Alvarez, McCutchen and Jose Tabata has just led the Pirates to an 84-win year, wouldn't it be a bummer to have to pay $12 million in 2012 to an aging and increasingly ineffective veteran signed in the 2008-2009 offseason? Wouldn't you rather have that money to use then? The fact is that, by the time most players reach free agency, they are past their primes. Committing to an expensive free agent would thus create problems later, if the Bucs actually did get to the point when they were ready to compete.

If you would like the Pirates to sign star free agents--well, who should they be? Rocco Baldelli isn't a terrible idea, and in the BD comments, rogero has also argued very intelligently in favor of signing players like Adam Dunn and Ben Sheets. Those definitely aren't the world's worst ideas, but given Dunn's contact issues and hulking physique and Sheets' injury problems, I wouldn't bet on either of them being effective in 2011 or 2012, when they'd likely still be on the Pirates' payroll.

If free agents that require long commitments are mostly out, that mostly leaves the Pirates looking for free agents few other teams want, because (as one commenter on the original Post-Gazette thread points out) few players would want to sign with the Pirates for a year or two unless the Pirates could promise them something other teams wouldn't offer, like a starting job.

In other words, people who look at the free agents Coonelly and Huntington are pursuing or not pursuing and see the same old Pirates are missing the point. In fact, looking at the 67-win season the Bucs are likely to have next year and seeing the same old Pirates misses the point. The minors and the majors are intimately connected, and the former has to come before the latter. Remaking a completely busted minor league system takes time--probably three to four years. If you want to see the differences between Huntington and Littlefield, the minor leagues are the place to look. This is not to excuse any failures Huntington has had at the major league level--any GM whose team uses Luis Rivas as much as the Pirates did last year has something to answer for--but to worry about those and not see the obvious improvements at the scouting and development levels misses the point entirely.

Littlefield went for moves that looked like improvements because moves that really are improvements for a struggling franchise are nearly always painful. He would have agreed enthusiastically with Kovacevic’s statement about winning in 2009. Littlefield’s and McClatchy’s single biggest failing was that they lacked the fortitude to make tough decisions, but now Huntington and Coonelly are being raked over the coals whenever they make one.