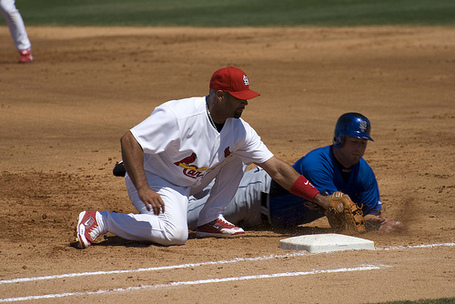 Forget the revolving door in the bullpen--the Cards' offseason basically boiled down to changing its middle infield and losing Braden Looper. Looper isn't anyone's idea of a great starting pitcher, but he posted respectable numbers for the 2008 Cards while soaking up 199 innings. Given the dreck at the back of St. Louis' rotation (Joel Pineiro is currently the fifth starter, and the Cards don't think they're going to get a full season from the returning Chris Carpenter, so they'll need to find some extra starts somewhere), that won't be easy to replace.

In the middle infield, Greene is a big upgrade over Izturis--Greene has a career 82 OPS+ at home and a 118 OPS+ on the road, and he should breathe easier now that he's out of the salty air at PETCO. He suffered a broken hand last year, which could affect his power going forward, but if it doesn't, he'll produce.

After releasing Kennedy, the Cards have former outfielder Skip Schumaker penciled in at second base, a position he has never played professionally. While I credit the St. Louis brass for creative thinking, the initial results haven't been encouraging, and there's no clear plan for what will happen if he doesn't take to the position. (Former Cardinal Mark Grudzielanek is still a free agent, though, and Cards minor leaguer Jarrett Hoffpauir might have a hint of upside, if the team gets desperate.)

The 2008 offense finished fourth in the National League with 779 runs, and with the great Albert Pujols leading the way again this year, they should score their fair share yet again. There are reasons for concern, however: third baseman Troy Glaus underwent surgery on his shoulder in the offseason, and it's uncertain when he'll return, and rightfielder Ryan Ludwick is due for a regression after playing way over his head last year.

The biggest problem with St. Louis' offense is how to deploy the team's talent. The Cards are considering starting two players out of position: Schumaker at second, and Joe Mather in Glaus' absence at third. Mather has played all of three professional games at third since 2004. Then there's the outfield situation: Ludwick and Rick Ankiel will start, but Ankiel could be in either center or left. The third starting outfield spot will probably be taken by Chris Duncan, just returning from back surgery, or top prospect Colby Rasmus.

Overall, the Cards' offense is riddled with injury questions and players with up-and-down minor league track records (Duncan, Mather, Schumaker, even Ludwick), but there's enough talent for the team to produce even if they get less than expected from some of these second-tier talents. One Pujols goes a long way.

Here's where things get tough. If the Cards enter 2009 with Schumaker and Mather in their starting infield, they're taking big risks with their pitchers' performance. While the Cardinals deserve a bit of slack for their strong track record in the past decade or so, and while their starters generally don't rely on a ton of groundball outs, they're really tempting fate.

The starter most likely to be affected by a porous infield is Carpenter, who had fairly strong groundball tendencies when he was healthy. Carpenter needs all the help he can get; he's pitched all of 21 innings since 2006.

On top of that, the Cardinals' starting corps should regress this year. Todd Wellemeyer, for example, pitched 191.7 innings last year with a 3.71 ERA. While Wellemeyer has always had good stuff (and the most freakishly broad shoulders in the league, incidentally), he's spent most of his career as a reliever, and a mediocre one. Similarly, Kyle Lohse pitched 200 innings last year and had a 3.78 ERA, after spending most of the rest of his career as a generic innings eater. And there isn't much starting pitching depth in the high minors. At least the Cardinals should benefit from a healthy Adam Wainwright, although even he has struggled in Spring Training so far.

In the bullpen, the Cards are auditioning closers, the most exciting of whom is the electric Chris Perez. An injured foot may hurt Perez's chances, though, and Tony LaRussa's comments suggest that Ryan Franklin may win the job. (Jason Motte is also a strong contender, and his insane stats in AAA last year suggest he'd do pretty well.) Overall, St. Louis has a fairly good mix of interesting and relatively young arms (Perez, Motte, Kyle McClellan) and veterans. (McClellan could also be in the mix for a rotation job if there's any problem with Carpenter.)

If the starting rotation holds up, this could be a strong team, but the odds are against them. I'd bet on problems from Pineiro, bouts of ineffectiveness from Carpenter, and pedestrian seasons from Lohse and Wellemeyer. If that happens, the Cards will probably finish around .500. I predict they'll finish third, just ahead of the Reds.