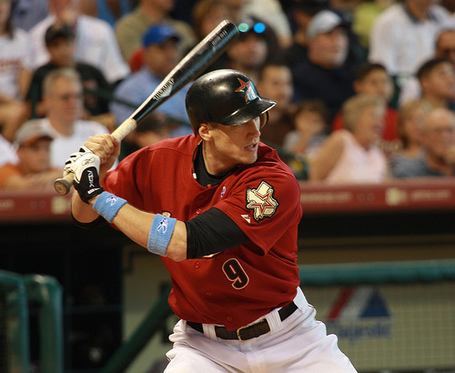 Hunter Pence could be a bright spot in a tough season for the Astros (photo: E-mans av8pix.com)

A mess. Hamstrung by an incredibly expensive bunch of old contracts (Miguel Tejada, Lance Berkman, Roy Oswalt and Carlos Lee will make $62 million between them in 2009) and by the appalling lack of depth in their minor league system, the Astros spent their few remaining dollars on quantity rather than quality. In addition to washed-up vets like Boone, Michaels and Hampton, beginning in August they also re-signed Brian Moehler, LaTroy Hawkins, Doug Brocail, Darin Erstad, Geoff Geary, Brandon Backe and Tim Byrdak and picked up their 2009 option on Geoff Blum.

While not all those players are unambiguously horrible and a few may even contribute, the Astros are paying way too much money for role players--the cost of all those players (including Boone, Michaels and Hampton) is about $19 million. If you have a farm system, you can pay the minimum a bunch of players to fill those jobs and spend the difference on a real contributor. The Astros, however, have one of the worst farm systems in the majors, and so they have no real choice but to look outside the organization for their supporting cast.

Even given those constraints, though, GM Ed Wade hasn't done a good job finding help. Erstad, for example, simply isn't a major leaguer anymore and hasn't been one for a long time. He last posted a 100 OPS+ during the Clinton presidency, and his OPS+ numbers the last three seasons have been 57, 68 and 78. He's a bad bench outfielder in any case, but it's even worse when one considers that the Astros' nominal starting centerfielder, Michael Bourn, can't hit his way out of a paper bag and would be a fifth outfielder or a AAA player in a well-run organization. Erstad had 322 at bats last year, and there's a decent chance he'll get at least that many this year.

Wade made a similarly odd decision when he non-tendered Ty Wigginton in December. Wigginton has had a spotty career, but he posted a .285/.350/.526 line for the Astros last year. He probably won't repeat that, but he's a much better bet than the options the Astros ended up with. Rather than pony up the $6 million or so it would have cost in arbitration to retain Wigginton, Wade elected to spend that money on the aforementioned junk role players, and will instead go with Blum and Boone at third. Blum has had one OBP above .296 since 2002, and Boone, except for one good season off the bench for the Marlins, hasn't hit much at all since leaving the Reds organization almost six years ago. Your average AAA team should have better third basemen than this.

The Astros hope 24-year-old third base prospect Chris Johnson can make an impact at some point this season, but I wouldn't bet on it--Johnson struggled badly after being promoted to Class AAA Round Rock last year and never hit much before last year either, so the Astros' hopes rest on 330 good at bats at AA Corpus Christi last year, during which Johnson had a batting average 60 points higher than at any other stop in his professional career. The Astros will probably be terrible at third, and there's really no good reason for it.

The 2009 Astros offense is feast or famine. They have one elite hitter in Berkman, and some very good ones in Hunter Pence (who's hit for high averages his entire career until 2008 and will probably bounce back somewhat this year) and Lee. The middle infield of Kaz Matsui and Tejada should be decent. The other three spots in the lineup, though, are dubious, to say the least. In addition to the problems at center and third, catcher J.R. Towles was a disaster in the bigs last year, and he wasn't a consistent producer in the minors, so there's no telling whether he'll pull it together.

Worse, if anyone important gets hurt (and when your two best hitters are both thirtysomething fat guys, you need to worry about that), there's no one to pick up the slack. The bench, possibly featuring Erstad, Michaels, Humberto Quintero, and whichever part of the Blum/Boone duo that isn't starting, will be terrible. The only decent bets to help out from the minor leagues might be pitcher-turned-outfielder Brian Bogusevic and infielder Drew Sutton, and neither of those guys have played in AAA yet.

Also feast or famine. The Astros have a very potent 1-2 punch in Oswalt and the underrated Wandy Rodriguez (whose recent rib cage injury doesn't sound like a big deal). But Hampton hasn't played a full season since 2004, Moehler has never been particularly good, and with Backe struggling to grab the fifth starter spot, the last position in the rotation could, incredibly, go to Russ Ortiz.

The situation in the bullpen is somewhat better, but the Astros don't have any lights-out options other than closer Jose Valverde (although Wesley Wright might one day become one). Instead, they have a bunch of players who simply get by. However, many, like Brocail, Geary, Hawkins and Byrdak, are in their 30s or 40s, and may not be able to get by quite as easily in 2009.

The Astros are relying very heavily on stars Berkman, Lee and Oswalt, and if any of those three players falter, the team will be in major trouble. A mid-payroll team needs to churn out cheap talent to complement its core but, due mostly to inattention to drafting and Latin America, the Astros have failed to do that. As a result, they're relying on any number of cheap veterans, and even given the team's financial and personnel constraints, many of those veterans are poorly chosen.

Last year, I predicted the Astros would finish fifth, citing some of the same concerns about depth. I was wrong--the Astros got more than I expected from Wigginton in particular, and a midseason trade for Wolf also paid dividends. So maybe I'll be wrong again. But the 2008 Astros also beat their Pythagorean record by nine games, and the 2009 team looks worse than last year's. I have to call them like I see them. Again, I predict they'll finish fifth, ahead of the Pirates.