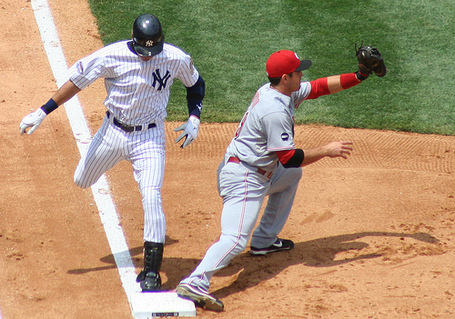 How much of their teammates' shortcomings will talented young Reds like Joey Votto be able to offset? (photo: phillenium1979)
2008 record: 74-88

Not good. Like the Astros, the Reds seems to think that once you have a decent core in place, the right thing to do is to spread the rest of your money around to as many mediocre veterans as possible. In addition to signing Hernandez, Taveras and Rhodes, the Reds also re-signed a number of their own free agents, including David Weathers (one year, $3.9 million), Mike Lincoln (two years, $4 million), Norris Hopper (one year, $402,000) and Jerry Hairston (one year, $2 milion). Individually, there were arguments to be made for each of these signings: both Weathers and Lincoln were modestly effective last year, Hopper cost barely above the league minimum, and Hairston posted an .871 OPS in 261 at bats in 2009. But Weathers is 39 and had problems with walks last year, Hairston will be 33 and had two straight years absolutely awful years before 2008, and Lincoln and Hopper have never been very good.

More troubling was the signing of Taveras to a two-year, $6.25 million deal, ostensibly to be their starting center fielder. As a basestealing fiend and a solid defensive outfielder, Taveras has his uses, but he managed just a .295 slugging percentage last year in Coors Field, and he has absolutely no business starting. Ramon Hernandez, meanwhile, has good power for a starting catcher, but his batting average has been dwindling for a while now, and he may be close to done.

If the right players develop, this could be a very interesting bunch of hitters, but the Reds will continue to miss Adam Dunn, and will suffer because players like Hernandez, Taveras, likely starting leftfielder Chris Dickerson, and newly-healthy shortstop Alex Gonzalez are unlikely to pull their weight. Also, while the Reds' farm system still contains several intriguing hitters in the wake of the graduations of Jay Bruce and Joey Votto, most of the really good ones are a couple years from the majors.

Reds GM Walt Jocketty, whether due to circumstance or intention, seems to be following the pattern he established while running the Cardinals: if your three or four talented hitters are good enough, you can phone in big portions of the rest of the lineup.  The World Series-winning '06 Cards, for example, featured Yadier Molina (53 OPS+), Aaron Miles (74) and So Taguchi (78) in key roles alongside Albert Pujols (178), Scott Rolen (126), and Jim Edmonds (110). During the last several years of Jocketty's tenure, the Cardinals nearly always had a needlessly frustrating supporting cast and bench. It's a strategy (if "strategy" is the right word) that's less likely to work for the Reds, because they don't have a Pujols in their lineup.

Still, it's hard to be too negative about an offense that features youngsters Bruce and Votto along with Edwin Encarnacion and Brandon Phillips. Bruce showed exceptional power in his 2008 rookie season and could easily break out in a big way this year. Votto already has a solid base of skills and will be entering his age-25 season. And I've been waiting for several years for Encarnacion to break out. He hasn't yet, but he bumped up his walk and home run rates last year, so this season may be the right time.

The Reds' first four starters (Edinson Volquez, Aaron Harang, Johnny Cueto and Bronson Arroyo) all pitched plenty of innings for Cincinnati last year, but the fifth rotation spot is open to a relative newcomer, probably either Micah Owings or Homer Bailey. All of the Reds' front four starters posted rather high flyball rates last year while pitching in a homer-friendly ballpark, and Owings is likely to do the same if he wins the job.

That's unfortunate for them--put the Reds' rotation in PETCO Park, and suddenly they'd look like the mid-90s Braves. With the exception of Owings, all the starters have high strikeout rates, and their staff could lead the majors in strikeouts this year. Still, their fates will depend on how many of their flyballs fall into the seats or the gaps, and that's not something the pitchers themselves have much control over. Taveras, for all his faults, will at least help the pitching staff somewhat. For now, though, the Reds have a talented rotation that is badly suited to its ballpark.

In the bullpen, the Reds will accompany closer Francisco Cordero (whose walks rose to worrisome levels in 2008) with a couple of effective and relatively young relievers in Jared Burton and Bill Bray. Beyond that, things get a bit dicier, and Weathers, Lincoln and Rhodes are neither young nor particularly good. Should any of them falter, the Reds shouldn't hesitate to turn to any number of young, mildly interesting options, such as Nick Masset (who's also nominally in the running for that last rotation job), Ramon Ramirez, Danny Herrera, Josh Roenicke or even fast-moving 2008 third-round pick Zach Stewart. All in all, this is a decent bullpen with few obvious shut-down pitchers but lots of intriguing ones.

The Reds' stable of high-upside players (Bruce, Votto, Volquez, Cueto, Bailey) will make them an interesting team to watch no matter what, but the full 25-man roster will leave something to be desired. If the Reds' offense stays healthy and if their starters keep the ball in the park and if Bruce and the other youngsters continue to develop, they could easily finish well above .500. Their lack of offensive depth is a huge problem, however, as is the fact that their starters have to pitch half their games in a stadium that magnifies their weaknesses. They also have a front office that, judging from its decisions over the past year or so, can't be trusted to cut bait on players who don't get the job done. I'm picking the Reds to finish fourth this year, but they could do better, and I think they're pretty clearly stronger than the Astros, so the chances that they'll finish below fourth are low.