Share All sharing options for: Andrew McCutchen: It's Time 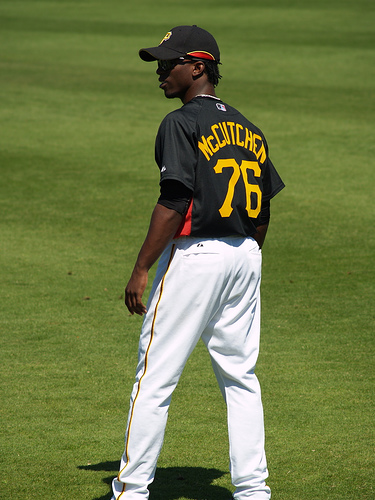 Enough waiting--I'm ready to see Andrew McCutchen as the Pirates' starting centerfielder. McCutchen went 3-for-4 today against Gwinnett, with a homer and a double, both of which he hit against a pitcher the Pirates faced earlier this year (Jordan Parr). McCutchen now has an .841 OPS at Class AAA Indianapolis and has been solid in every phase of the game: hitting for average (.293), hitting for power (a .489 slugging percentage, which is great for his age and league), baserunning (he has ten steals and has only been caught twice), defense (he's always been very highly regarded). His .353 on-base percentage is the weakest stat on his line, and even that isn't bad, and OBP has been a strength throughout his career.

The only trait McCutchen lacks right now is home run power, and keeping him at Indianapolis is unlikely to help much with that. He probably just needs to grow into his body a bit more, and his excellent control of the strike zone (he has fifteen walks against eighteen strikeouts so far) and extra-base hits (he has nine doubles and a remarkable eight triples) suggest he'll hit more homers as he ages.

We've also reached the point in the year where it's unlikely that McCutchen will be named a "Super Two" player. Since McCutchen played a few weeks the year in the minors, the Pirates would've controlled his rights the next six years after this one no matter what, but the 17% of players between two and three years of service time with the most service time also become "Super Two" players and get an extra year of arbitration. That could have cost the Pirates millions of dollars. Now that we're in late May, it's unlikely McCutchen will be one of those players.

So now is a good time to have McCutchen start learning on the job in the big leagues. His first year probably won't be anything too special--actually, it'll probably look a little like the one Nyjer Morgan is having, but with a little more power--but he'll probably be at least decent now, and the indicators are all there for him to continue to improve as he ages: the well-rounded skill set, the athleticism, the ability to control the strike zone.

I n the big leagues, neither Morgan nor Brandon Moss should block McCutchen if he's ready. Morgan is nothing but a placeholder, and Moss probably isn't much more than that either. Of the two, Morgan has played better so far, but Moss has progressed throughout the year; my personal preference would be for McCutchen to take at bats away from Morgan in the hope that Moss will continue to play well and provide some power, which the Pirates need badly. McCutchen is, by all accounts, a much better defensive outfielder than Nate McLouth, so McLouth should move to left and make room for McCutchen in center.

I won't be too concerned if it's Moss rather than Morgan who loses the at bats, though. Morgan deserves a ton of credit for playing very good defense and generally being a lot more valuable than I ever thought he could be. And anyway, I don't want to miss the forest for the trees--this isn't about Moss or Morgan. It's about McCutchen. He's the best position prospect the Pirates have had since Aramis Ramirez came up, and it's time for him to start at PNC.