Share All sharing options for: Nate McLouth Traded to Braves

Wow. The deal opens a spot for Andrew McCutchen, who will join the Pirates immediately, presumably as their starting centerfielder. Wow. Wow wow wow.

Locke is a hard-throwing lefty starter who should report to Lynchburg. He pitched well for Class A Rome as a 20-year-old last year. He gets a lot of groundballs, but control is an issue. Lefties who start and throw hard are pretty rare commodities, so he's a very nice prospect to have around and probably the headline player in the deal. The Pirates prospect most similar to Locke in terms of value and career path is Bryan Morris, who maybe serves as a cautionary tale, but Locke does have good upside.

Hernandez came to the Braves in the Edgar Renteria deal and is a pretty nifty outfield prospect. He doesn't have much power (yet), but he has good contact ability, some speed, and a decent batting eye. He's a notch below the McCutchen/Tabata class, but that doesn't mean he's a bad prospect. He also fits the Pirates' plan of using fast outfielders in center and left. He has a good chance of posting decent OBPs in the majors, and if the Pirates are very lucky, some power will come along too. 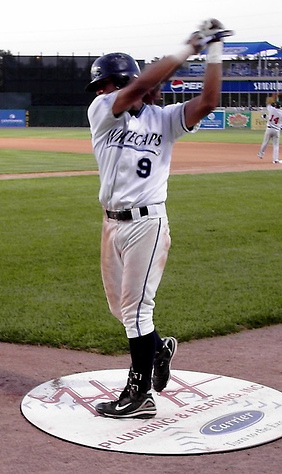 Morton is a 25-year-old starter who was pitching at Class AAA Gwinnett. He pitched a bunch for Atlanta last year and wasn't especially good, but he has excellent stuff and his minor league numbers are solid. He also has a starter's arsenal. His reputation also suggests he's a bit of a headcase. In terms of his value, think Ross Ohlendorf when the Pirates got him. He'll be lucky if he turns out as well as Ohlendorf has, but he has upside, and I wouldn't be surprised if the Pirates try to find space in the rotation for him very soon.

In the comments from a Braves fan, was385:

Despite the whining on our board, I really like this deal for both teams...

Charlie Morton- When he’s on, he’s nasty and has a very nice sinker and some pretty good secondary stuff. Consistency is his biggest problem as he gets that sinker up a little too much and that’s when he gets hit. If you can fix the consistency, he’s got the stuff to be a very solid middle of the rotation starter.

Gorkys Hernandez- When healthy, he can absolutely fly and plays a fantastic center field with a strong arm. Hasn’t really developed the power that some hoped he would and has dealt with some nagging injuries over the past two years, but the talent is there to be a very good leadoff type and centerfielder.

Jeff Locke- One of my favorite prospects. He’s a hard throwing lefty who draws a lot of ground balls and whose control is usually a plus (though it has led to his struggles this year). He’s got a very strong curve and a change that has gotten much better (though still below average) since he added it to his repertoire. A long way off with a lot of potential.

I'm not sure this is a bad deal, but it seems like a bit of a grab bag. McLouth was playing well and was under team control for several more years, so there should have been no rush to trade him. This deal does have the nice side effect of making room for McCutchen while avoiding a playing time logjam in the outfield, but neither Nyjer Morgan nor Brandon Moss are worth restructuring your franchise for; not even close. (And I doubt those considerations played much role in the Pirates' decision to trade McLouth, anyway.)

Perhaps some perspective is in order--McLouth is a solid hitter in every phase of the game, but not a great one, and statistically, he's been a little worse than last year. Before last year, he was widely regarded as a fourth outfielder. To our eyes as fans, he's always looked like a good defender, but every statistical measure says he's awful. Outside Pittsburgh, he's a very solid complementary player, but not a star, and he's in his age-27 season, so now might be the best possible time to trade him. I'm just not overly excited about this package of talent. Locke or Hernandez could end up making this deal look good for the Pirates, but I would have preferred to get either a surer prospect or one with more upside. There is something to be said here for the depth the Pirates are acquiring, and the Bucs' young pitching looks a good deal better than it did yesterday.

I'm naturally predisposed to be excited by these sorts of trades--I like prospects, and I don't get as attached to established players as most fans do. I'm fine with the idea of trading McLouth; it makes perfect sense in terms of the Bucs' overall plan, and they should be listening to offers on other veterans too. I'm just not sure about the return. I'm intrigued, but I'm not blown away. I think the best way to explain this deal is to say that McLouth probably isn't as good as most of us think he is. The Pirates, like a lot of people around baseball, have probably come to view McLouth as defensively challenged and better suited to a corner, where his bat isn't anything special.