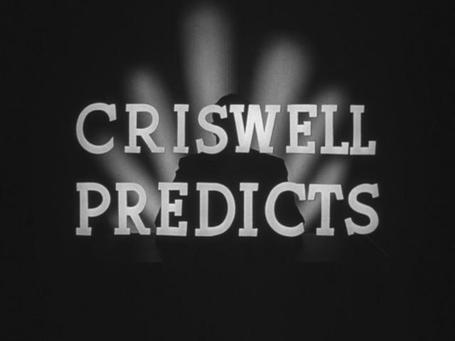 When I was a kid, I spent a lot of time with my nose buried in books, particularly science fiction stories. I enjoyed them all on their own merits, of course, but I was also fascinated by the idea of retrospective futures. For example, stories written in the 1940s about what the year 1990 would look like, but not read by me until 1993, at which time I already knew how things would turn out. Food pills, flying cars, android servants... it was interesting to look at where the predictions were right, and where they were way off.

As we kill time this winter waiting for spring training to start, I thought it might be fun to take a look at some retrospective baseball futures. Baseball America's website includes pre-draft guides for every draft from 1999 to the present. I'm going to select some year-of-draft scouting reports for a few current Pirates , remove all the identifying specifics like names, schools, and states, and post them below the cut. Take your best guess as to which player each report is describing, and post it in the comments. For our purposes, all players on the current 40-man roster and all 2010 NRIs are eligible. No Googling, please - guess honestly. It's more fun that way.

"College X" is building a reputation for churning out top-notch pitching prospects, and "Player A" is this year's candidate. The RHP has a slow, easy delivery with a low three-quarters arm slot. His fastball tops out at 98 mph with armside sink and bore. He went 6-3, 3.66 in the regular season, with 73 strikeouts and 28 walks in 59 innings as his team's No. 1 starter, but most scouts project him as a closer because his breaking pitch is only fringe average. At times he'll throw a tight slider, but it can flatten out because his arm slot varies and he doesn't stay on top of it.

"Player B" joined former "Team X" first-round pick "Player X" as the only "College X" hurlers to win conference pitcher-of-the-year honors, coming within six of "Player Y's" career strikeout record in the process. "Player B" is a sturdily built LHP and has solid arm strength. He pitches at 87-88 mph and tops out 92, and he'll flash a good slider at times.

RHP/1B "Player C"  played for two seasons at junior college before heading to "College X" for his junior season. A two-way star at junior college, he batted .448-11-42 and went 9-2, 2.54 on the mound with 81 strikeouts in 72 innings while issuing just 12 walks. He wasn't as successful this year, going just 3-8, 5.16, but he struck out 75 in 68 innings. "Player C" has a prototype pitcher's body and durable arm. He has a four-pitch mix that includes a fastball, curveball, split-finger and changeup and throws in the 87-91 mph range. "Player C" has solid mechanics but average arm speed. Some scouts thought his pitching suffered because he was playing all week. His brother plays for "College Y".

Update: The 24 hours are up, and the answers are as follows:

Player A : Ross Ohlendorf . He was the clear favorite in voting, drawing mentions on eleven ballots, with Hanrahan (six) and Hansen (five-and-a-half) also being popular choices (probably due to the velocity clue). Ohlendorf's college arm slot (as seen here ) was very similar to his current one, and while he doesn't touch 98 very often these days, his slider has become more consistent and developed into a real weapon. Princeton's alleged reputation as a pitching factory appears to have thrown some people, but they'd actually been fairly productive in that respect at the time the comment was made. Chris Young was a third-round pick in 2000 (after falling on signability, no less), the ill-fated Thomas Pauly went in the second in 2003, and Ohlendorf and Will Venable were highly-touted members of the 2004 team.

Player B : Justin Thomas . This one appears to have thrown a lot of people. Maholm pulled more than twice as many votes (22) as all other candidates combined, while Thomas was mentioned only on Roberto's second just-for-fun ballot (not included in the count, for obvious reasons). It's easy to see why: Maholm is a durable college lefty with a fastball that typically sits in the high 80s and a good slider. As highly-decorated as he was as an amateur, however, he never was Southeastern Conference Pitcher of the Year - that honor went to South Carolina's David Marchbanks in 2003. Thomas, in contrast, was a big fish in a slightly smaller pond in 2005, becoming the Horizon League's Pitcher of the Year with Youngstown State, following in the example of "Player X" (Brad Hennessey) and "Player Y" (Dave Dravecky). Thomas still throws in the high 80s, and still has a quality slider, but the lack of a solid third pitch helped pave the way for his move to the pen.

Player C : Kevin Hart . Hart was the consensus pick for BD readers with ten votes, beating out Dan McCutchen and Brad "Not Mike" Lincoln, who had six apiece. Both were understandable choices, given Lincoln's offensive prowess and the transfer in McCutchen's academic background, but in the end Hart was the correct answer. Interestingly, the mention of Hart as a two-way player also led to a few position-player guesses, such as LaRoche and JVB. The brother mentioned in the story was Joe Hart , at that time a pitcher for Texas A&M. Hart still looks like a pitcher, still relies on a four-pitch mix, and is still frustratingly inconsistent, but his fastball sits at 92 these days.

Due to the Thomas curveball, nobody got a perfect score, but bragging rights for this round go to Alleghenys , Adam Reynolds , Roberto , Charlie , Willton , and ElDuce  (whew!) for correctly identifying two apiece. I had a lot of fun doing these, and I hope you did as well. We'll have to try it (or something similar) again in the future.