Charlie Morton will replace Delwyn Young on the Winter Caravan next week. Young has been affected by some of the recent flooding in the Los Angeles area.

You may think the idea of Young skipping out on the Caravan because of bad weather in Southern California is some kind of joke, but no, and unfortunately I know that firsthand. Here's my car, parked at my apartment complex in San Diego yesterday afternoon. 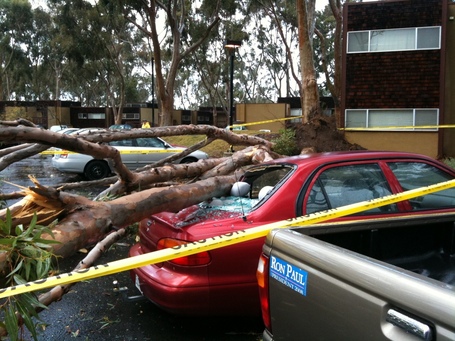 It's insured, fortunately. The entire complex is filled with eucalyptus trees, which apparently are very shallowly rooted and aren't meant to withstand lots of rain and wind. Which often is fine, of course, because we don't have a lot of that, but which creates big problems when there is rain. The entire week here reminds me of when I was in college in southern Virginia and we had a "blizzard" that was probably about eight inches of snow. School got cancelled Monday through Thursday. They were planning to have it on Friday, but then they had to cancel that too because they forgot to clean off the parking lots. Give a region weather it's not used to, and strange things happen.