Share All sharing options for: Rangers may shop Joaquin Arias 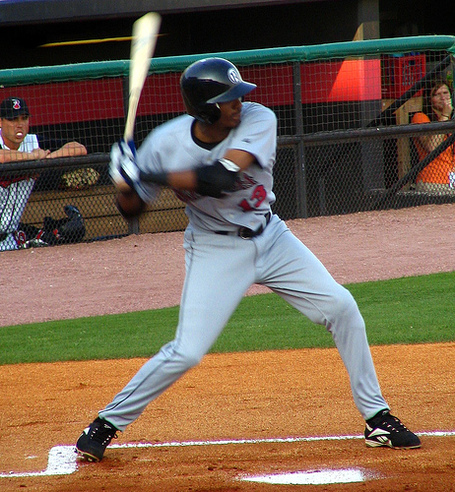 With the current 40-man roster packed to the gills, the Rangers were looking at having to trim two bodies. The most likely were INF Joaquin Arias and RHP Luis Mendoza , both of whom had strong winter league performances. Arias played well enough in the Dominican Republic to start earning some interest from other clubs. Mendoza went 7-4 with a 2.89 ERA in the Mexican League.

The news gives the Rangers six weeks to assess the situation and any number of potential outcomes. Among those:

• Dealing either or both Arias and Mendoza: The six-week window means that the Rangers can showcase both Arias and Mendoza all spring and potentially make a deal for either or both of them, rather than simply putting them on waivers. Arias has also played his way into the picture for the 25th man on the big league roster, so it gives the Rangers more time to evaluate him on that front as well. -Evan Grant, The Dallas Morning News

Given our organizational weakness at shortstop, this is probably a situation worth monitoring. Arias (stats here ) is a fairly well-pedigreed young shortstop stuck behind three fairly well-established regulars in Ian Kinsler , Elvis Andrus , and Michael Young . Nicknamed "Spiderman", he'll be 25 next year. He's out of options, and the Rangers are caught by a roster crunch in two different ways. First, they're temporarily carrying 42 players on their 40-man roster, due to the welcome (but unexpected) reinstatement of formerly-banned Dominican pitchers Omar Beltre and Alexi Ogando . Second, he's facing fairly stiff competition for a job as a utility infielder, including Khalil Greene and Esteban German .

Arias was originally signed out of the Dominican Republic by the Yankees , earning a $300,000 bonus (in 2001) as a 16-year-old, then was sent to Texas in the Alex Rodriguez trade before the 2004 season. He played in the Futures Game in 2006, and BA ranked him among his team's top 10 prospects every year from 2004-2007. They also ranked him as the #15 prospect in the California League in 2004, and the #12 prospect in the Texas League and #77 in all of baseball in 2005. According to their scouting reports, he is regarded as a very good athlete. He has above-average range in the field, and a decent arm, but like many young shortstops lacks consistency with the glove, sometimes making spectacular plays and then botching routine ones. On offense, he is a good contact hitter with quick wrists and a very aggressive approach (probably too aggressive). He shows some power in batting practice, but hasn't translated much of it into games, and he has above-average speed, but is not a particularly high-percentage baserunner. His health record is spotty. He played through a badly sprained ankle in 2006, causing a drop in his play, and missed almost all of 2007 with both an infected thumb and a shoulder problem that required surgery, costing him some of the strength in what had been a plus-plus arm. He also missed some time last year to be with his ailing father, who died a few weeks later. Most recently, he played winter ball in the Dominican, putting up a .305/.355/.337 line as the starting shortstop for Escogido. His older brother, Alberto Arias , is a relief pitcher for the Astros .

Arias isn't a sure thing, but I think he could potentially develop into a solid starting shortstop if given the chance, and he would be under organizational control long enough to be a viable bridge to our low-minors shortstop prospects. If the Rangers were considering waiving him outright, they probably wouldn't want a huge return in exchange. They have a very left-handed lineup, and have been searching for an inexpensive right-handed 1B/OF who could let them rest guys like Chris Davis against tough lefties (Link , one of many.). I wonder what they think of Steve Pearce ?