Share All sharing options for: A.J. Burnett's Broken Orbital Bone Not the First 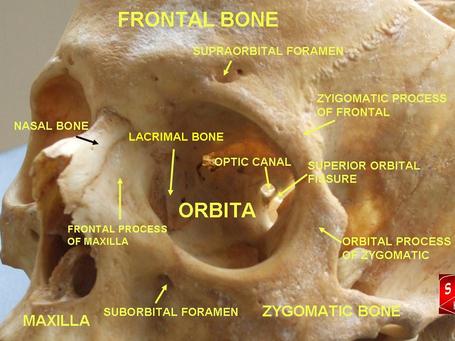 The head bone's connected to... lots of other head bones. Image by "Anatomist90", via Wikimedia Commons.

In light of the recent unfortunate developments surrounding A.J. Burnett's face, I thought it might be worthwhile to look back on a few other recent Pirates who had sustained a similar injury to an orbital bone in the past, to see whether past precedent has anything to offer in the way of useful information regarding his condition.

The most obvious point of comparison is Paul Maholm. On May 15, 2004, not quite a year after the lefty became a Pirates first-round pick, he was struck in the face by a line drive off the bat of Winston-Salem Warthogs first baseman (and future AAAA slugger) Casey Rogowski, breaking his nose and left orbital bone. Maholm returned to game action in August, and had a surgical procedure to clean up scar tissue in the area in September. He suffered no serious long-term effects from the injury, and was up and pitching in the major leagues by late 2005. There's a good article from John Perrotto and the Beaver County Times about Maholm's injury and recovery (including his post-injury psychological adjustments) here.

More recently, Pirates catcher Eric Fryer sustained a broken orbital bone of his own. Fryer's injury happened in the first inning of a Bradenton Marauders game on July 1, 2010, when he was hit in the face by a pitch from Charlotte Stone Crabs righty Shane Dyer. Fryer missed approximately a month's worth of games, and like Maholm, he suffered no long-term ill effects, lighting up AA on the way to making his major league debut the next year.

Another relatively recent example is Upper St. Clair native (and 2006 Pirates starting first baseman) Sean Casey, who broke an orbital bone at the start of his rookie year in 1998. Shortly before the third game of the Reds' season, on April 2, Casey was hit in the left eye by an unexpected throw from infielder Damian Jackson during pregame warmups. He experienced some temporary swelling and short-term blurred vision, but after surgery to correct the break he returned to the lineup on May 5, and he went on to have a productive rookie season, followed by an offensive breakout in 1999.

None of these situations are perfectly analogous to Burnett's, of course. Every person is different, and with seven different bones (the ethmoid, frontal, lacrimal, maxillary, palatine, sphenoid, and zygomatic bones) making up the orbital socket, there are many different types of orbital fractures as well. Still, as long as Burnett did not sustain any injury to the eye itself, it seems likely that his injury will be more of a temporary inconvenience for the team than a major stumbling block.