Hello, my name is David Manel. I am honored to be the newest regular contributor to Bucs Dugout. My goal is to bring you interesting and insightful analysis of the Pirates from a sabermetric perspective. I hope you enjoy reading my work as much as I enjoy creating it.

I am tracking runs allowed at the lower rate of 90 percent of league average for the following three reasons:

1. It is becoming increasingly unlikely that the offense will come within five percent of NL average runs scored. If the Pirates are going to finish the season with a record close to .500, they're going to have to allow a (well) below NL average number of runs per game.

2. If the offense were to have an unexpected and stunning turnaround, allowing 90 percent of NL average runs would make the Pirates pennant contenders.

3. At this point, allowing a league-average amount of runs would be a disappointment. Expectations are that the pitching/defense will remain at least slightly better than NL average for the rest of season. Finishing the year at 90 percent of league average would be a special accomplishment, even if the offense never fully comes around.

The Pirates played six games this week and scored 22 runs - an average of 3.67 RS/G. Their RS/G for the season increased from 2.88, to 2.98. Last week they needed to average 4.46 runs per game to reach NL average by the end of the season. That number has increased to 4.58. In other words, the Pirates offense will have to score at a rate 11 percent above current NL average for the rest of the season in order to reach a NL average number of runs scored. 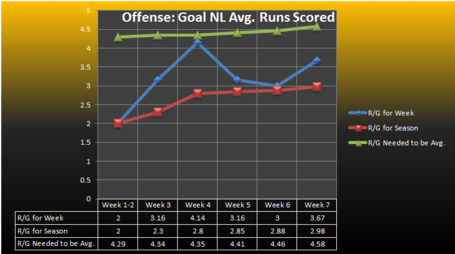 Interpretation: the goal for the Pirates is to have the red line meet with the green line.

The Pirates played six games this week and allowed 16 runs, an average of 2.67 runs allowed per game. Their RA/G for the season decreased to from 3.65, to 3.53. Last week they needed to average 3.65 RA/G to finish at 90 percent of NL average runs allowed. That number has increased to 3.77. In other words, the Pirates pitching/defense will have to give up nine percent fewer runs than current NL average for the rest of the season in order to finish with 90 percent of league average RA/G.

Interpretation: the goal for the Pirates is to have the green line remain above the red line.

Comparison to the 1968 White Sox

Over the course of the last week many comparisons were made between the '12 Pirates offense and the '68 White Sox. The comparisons were inspired by the fact that the '68 White Sox scored the least number of runs over a 162 game schedule. The Pirates 10-run outburst yesterday (5/27/12) helped make it less less likely that they will finish below that record. The '12 Pirates now average 2.98 RS/G, while the '68 Chicago team ended the season with a 2.86 average. At this point in the '68 season, the White Sox were averaging 2.54 RS/G.

Finally, each week I will update the Pythagorean record for the Pirates based on two scenarios:

Sunday's 10 runs helped the Pirates avoid another dreadful week of run production. In fact, it led to the second highest rate of run scoring of the season. The spread between their seasonal average, and the pace they will have to achieve in order to reach league average by the end of the season, is now 1.6 runs per game.

Again, the pitching was nothing short of fantastic. For the third week this season (Weeks 1 and 2 are collapsed into one data point), the Pirates allowed fewer than three runs per game.

The Pythagorean records really give us a sense of how much the pitching/defense is sustaining this team. We would expect the Pirates to be 13 games below .500 if they had allowed a league average rate of runs. Conversely, if the offense were scoring at a league average rate, and the pitching were performing the same, we would expect the them to be solidly in first place in the NL Central.

That's it for this week. We'll see where things stand next Monday morning after the Pirates play six games against the Reds (three games) and Brewers (three games). The Reds are allowing 3.77 runs per game and the Brewers are second from worst in run prevention, allowing 4.96 RA/G. In terms of scoring, the Reds average slightly below NL average at 4.06 runs; the Brewers offense has been slightly above average, 4.3.

Coming up mid-week, I will be posting a study examining Clint Hurdle's use of the sacrifice bunt. Rightly or wrongly, nothing unifies the Pirates fans on Twitter and elsewhere more than their frustration with his use of this tactic.