If you buy something from an SB Nation link, Vox Media may earn a commission. See our ethics statement.

#Hurdled is one of the most popular hashtags within the Pittsburgh Pirates Twitter community. If you are unfamiliar with Twitter, a hashtag is way to mark a keyword or topic on Twitter. When Pirates fans Tweet the hastag "#Hurdled", they are typically doing so sarcastically, expressing their opposition to some tactical decision made by manager Clint Hurdle.

Nothing leads to a flurry of #Hurdled Tweets like when a Pirates position player attempts a sacrifice bunt. Most Pirates fans are of the opinion that not only is the sacrifice bunt a bad tactical move in almost all situations (except with pitchers batting), but also that Hurdle uses the tactic far too often, or at a rate far higher than league average. In this post, I put the latter opinion to the test empirically. Then, I conclude with a few thoughts about the tactic itself, and invite all of you to join me in what I am sure will be lively and constructive debate in the comment section. (Hint: I'm evolving towards a more liberal position regarding its use.)

Using Play Index at BaseballReference.com, I calculated the rate at which National League teams have attempted sacrifice bunts in the following situations:

After compiling the 2012 data, I then looked at Clint Hurdle's use of the sacrifice bunt with the Colorado Rockies. I wanted to find out if Hurdle's (over)use of the tactic was a reaction to managing an offensively-challenged team, or if it is just the way he approaches managing baseball games.

The graph below compares of the "Sac. Rate" of all National Leagues in 2012 (current as of Wednesday, May 30). 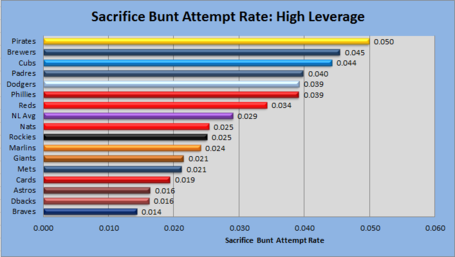 The Pirates have attempted sacrifice bunts in high leverage situations more than any other team in the National League. About five percent of the time the Pirates find themselves in such situations, Clint Hurdle signals for a sacrifice bunt. 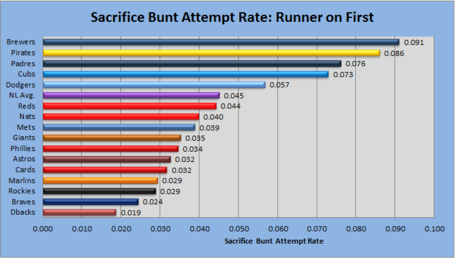 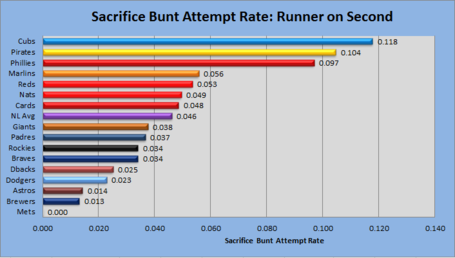 Again, the Pirates attempt a much higher rate of sacrifice bunts than National League and Major League average. They trail only the Cubs in the National League. With a runner on second, less than two outs, and the game within three runs, they attempt a sacrifice ten percent of the time.

Pirates fans' intuitions are correct: the Pirates do employ the sacrifice bunt tactic at a rate much higher than league average. Indeed, almost across the board, they attempt sacrifice bunts at a rate almost double that of MLB average. Conversely, the Braves and Diamondbacks both have consistently very low rates.

The next question is whether Clint Hurdle is employing this tactic because he is managing a team that is struggling to score runs; or has it always characterized his managing style. The fact that he managed in a high scoring environment like Coors Field is particularly intriguing. 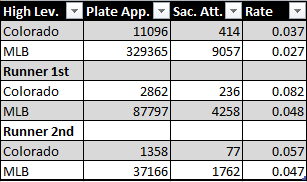 We can see pretty clearly that, while he used the tactic less frequently than he has this year, Clint Hurdle has consistently called for more sacrifice bunt attempts than league average managers. What is most surprising to me is that the rate of sacrifice bunt attempts with runners on first was almost exactly the same in his six full seasons with Colorado as it's been this year with the Pirates.

All of this leads us to the big question: Are Clint Hurdle's tactics fundamentally flawed when it comes to sacrificing?

As most of the readers of this blog know, there has been a dramatic shift in thinking when it comes to sacrifice bunt attempts (with position players) in the last 20 or so years. Conventional wisdom now holds that it is always a bad idea to give up outs for bases. Win expectancy models show that sacrifices are almost always a losing proposition; and run expectation tables show that the decrease in expected runs from an out, outweigh the benefits of an extra base.

However, what is very often overlooked is that bunts do not always lead to an exchange of an out for a base. Bunts can turn into hits, or runners can reach on an error (about 15 percent of plate appearances in which a sacrifice has been attempted, the batter reached base safely). No less of an authority than Bill James has noted that he "would certainly signal a bunt with a good bunter against a poor third baseman.' (quoted from "Baseball Between the Numbers", pg. 132). Moreover, in "The Book: Playing the Percentages in Baseball", highly-regarded baseball researcher Tom Tango writes,

Over the past 50 games, the 2012 Pirates have played in one of the lowest run-scoring environments of the modern era. Moreover, in the last few years we have seen a decline in scoring generally. Whether this justifies Clint Hurdle's above average use of the tactic is a discussion worth having. Generally speaking, however, it is probably true that a much more nuanced view of the sacrifice bunt tactic is called for than is generally appreciated.

There is obviously much more discussion to be had on this topic. I invite all of you to join me in the "comments" section to carry on this conversation over the next few days.

What we have learned is that Clint Hurdle does call for sacrifice attempts more than average. What we do not know (with a certainty) is whether the Pirates are being #Hurdled as a consequence.