Return To Average: The Pirates In Week 9

Share All sharing options for: Return To Average: The Pirates In Week 9

It's been a pretty good day to be a Pirates fan, hasn't it?

I don't know how they have done it, and I have serious questions about whether they can sustain it, but I see no reason not to enjoy it looking at this one last time today:

We all know the caveats. It's only June. They've been 'lucky.' They did this last year. However, I don't know about you, but none of that prevented me from getting goosebumps when #FirstPlaceBucs trended nationally on Twitter seconds after the Reds game ended last night.

There is a lot packed into this Monday's installment of "Return to Average First." The unavoidable theme that emerges from the data is the improbability of what we have seen and the unlikelihood of it continuing. However, in its own way, I think that makes watching the rest of this season unfold even more intriguing and fun. To the numbers:

The reasons why I initially started tracking runs scored and runs allowed at these rates is explained here. However, with the Pirates now sitting on top of the NL Central, and with the city starting to buzz with postseason talk, tracking runs at these rates takes on renewed significance. Here is why:

Simply put, for the Pirates to make postseason, it looks like they will need to either limit opponents to less than 90 percent of league average runs, or score a league average number of runs themselves. Unless they are extraordinarily lucky, it is highly unlikely they make the postseason any other way.

The Pirates played six games this week and scored 29 runs - an average of 4.83 RS/G. Their RS/G for the season increased from 3.06 to 3.24. Last week they needed to average 4.63 runs per game to reach NL average by the end of the season. That number has decreased (for the first time this season) to 4.57. In other words, the Pirates offense will have to score at a rate of 11 percent above current projected NL average for the rest of the season in order to reach a NL average number of runs scored. 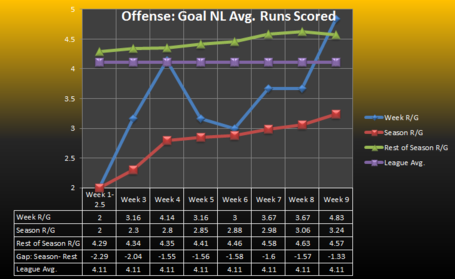 Interpretation: the goal is to have the red line meet the green line at the purple line.

The Pirates played six games this week and allowed 20 runs, an average of 3.33 runs allowed per game. Their RA/G for the season decreased from 3.55, to 3.52. Last week they needed to average below 3.77 RA/G to finish at 90 percent of NL average runs allowed. That number has increased to 3.79 (in other words, they gained wiggle room). For the Pirates pitching/defense to finish with 90 percent of league average RA/G, they will now only have to give up eight percent fewer runs than expected NL average for the rest of the season. 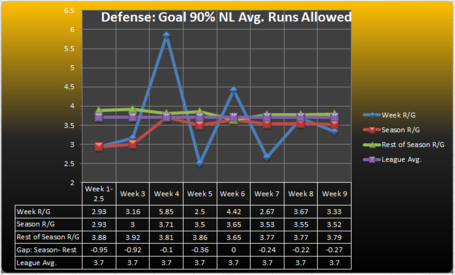 Interpretation: goal is to have the red line remain below the purple line

Last week I introduced a measure of offensive efficiency – i.e. whether the Pirates are scoring as many runs as they should, given their total number of singles, doubles, triples, home runs, walks and other offensive events. I measured efficiency by dividing the Pirates actual runs scored by Fangraphs.com's wRC (Weighted Runs Created) statistic. wRC is a measure of how many runs a team should have scored based on what its hitters have done. In other words, it is an estimate of runs scored based on the totality of offensive events for a team.

If the season were to end today, the Pirates efficiency rate would rank fourth best since 1970. Conversely, Pirates opponents' efficiency would rank near the bottom, 1153 our of 1175.

Finally, the question on virtually every Pirates fan's mind is whether the team's early-season success is sustainable. There are a number of ways to examine that question, and I am sure it will be the topic of many future posts by yours truly. For my initial investigation of the topic, I decided to use Fangraphs' "Rest of Season ZiPS Projections" and calculate the number of expected runs scored and runs allowed for the rest of the season, then convert those results into a Pythagorean record.

Every baseball general manager uses some type of projection system to estimate future performance. One of the most well-known is ZiPS (Szymborski Projection System, please read this). It is highly likely that Neal Huntington is looking at very similar projections and using a similar, but more highly-refined methodology as he contemplates the sustainability of this team's winning.

In order to get an idea of how the rest of the season might play out, I took the following steps:

Here are the results: 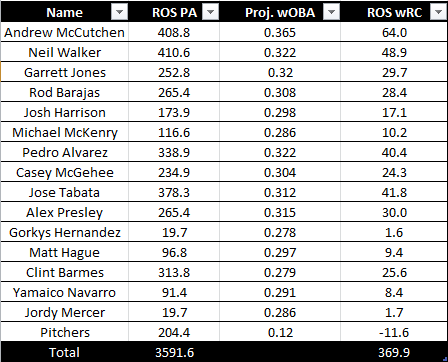 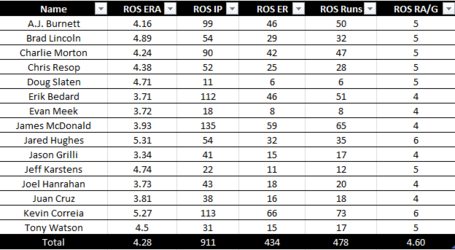 As can be seen, this method of projection finds the Pirates being outscored 478-370 the rest of the season. The run differential can now be easily transformed into an estimate of wins and loses using the Pythagorean formula

According to the Rest of Season ZiPS Projection system, if the Pirates roster was used in the exactly the same way for the remaining 104 games, we would expect them to finish the season with 71 wins and 91 losses (39-64 the rest of the way). Looking at the average runs scored per game, ZiPS projects a fairly severe regression for the Pirates pitching staff, and a steady, but much smaller, improvement in offense.

That's it for this week's "Return to Average First." We'll see where things stand next Monday after the Pirates play six games against the Orioles (Tuesday-Thursday) and the Indians (Friday-Sunday). The Orioles are allowing 4.45 runs per game, and the Indians 4.42. In terms of scoring, both the Orioles and Indians are slightly below AL average at 4.38 and 4.42, respectively.

Coming up mid-week, I will be posting a study that examines Pirates defense and perhaps some revisions to the projection system outlined above. Hopefully, I'll be able to get that study done before packing the car for a baseball getaway in Cleveland for what should be a phenomenal baseball atmosphere.