Share All sharing options for: Pirates Defense A Key Factor In Early-Season Success

"It takes pitching, hitting and defense. Any two can win. All three make you unbeatable." -Joe Garagiola

As has been well-chronicled over the first 61 games of the season, the Pirates have remained in contention despite a historically awful offense because they have pitched above projections, gotten lucky and been "clutch." Some, but not much, attention has focused on the role that defense has played in their early season success. In fact, the managing editor of Fangraphs.com, Dave Cameron, just posted an article in which he used the (historically) worst aspect of the Pirates defense, throwing out basestealers, to make a point about how controlling the running game is overrated (article here). (The Pirates are throwing out 8.1 percent of basestealers, putting them on pace for the lowest CS rate since the statistic was first tracked, 1890.)

Today I am going to focus on the Pirates team defense and explore whether it has contributed to the team's unexpectedly strong start. It is important to remember that defensive metrics are volatile in small sample sizes, so this analysis is best read as a description of the season so far. This is especially true when looking at specific positions and individual players. To the numbers (data current as of 6/11/12):

This is just a straightforward look at the percentage of unearned runs scored against the Pirates. Of course errors are one the more subjective statistics in baseball, but both in the context of this season and historically, there is nothing terribly noteworthy about the Pirates' current rate. It is slightly above league average for the season. Looked at historically, the Pirates' current pace would rank them 566 out of 1174 teams since 1970. (The lowest rate since ‘70 belongs to the 1999 New York Mets, 2.8 percent; and the highest percentage of unearned runs is held by the 1972 Los Angeles Dodgers, 17.6 percent.) 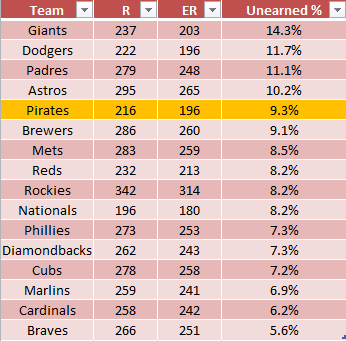 In this section we look at the Pirates team defense using the latest advanced defensive metrics. UZR is a measure of total defense (range, errors, arm) and expresses its results in total runs saved/allowed above/below average (for a full explanation go here). RngR just looks at "range" - the ability to get to balls hit into a defender's zone. It is also expressed in runs saved/allowed. Negative numbers are the estimated runs given up above average; positive numbers are estimated runs saved above average.

In the graphs below I compare all NL teams by UZR and RngR: 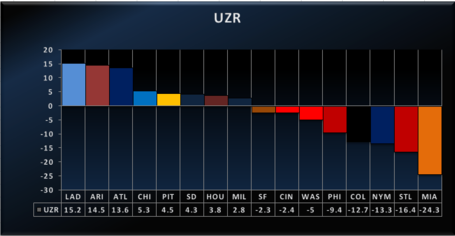 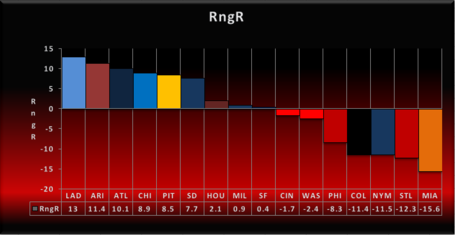 The Pirates defense is performing above NL average in both UZR and RngR. Position players have saved the pitchers about four runs. For comparison, in 2011 the Pirates UZR was below NL average, -12.8 (-2.8 UZR/150), and their RngR was just about league average, -1.0.

Now, we turn to a position-by-position comparison between the Pirates and NL average (average for all Major League Baseball is zero). Of particular interest is shortstop, where the addition of Clint Barmes has seemed to provide defensive dividends. The Pirates have the highest UZR at that position in the National League. Last season, they were right around average. Of course, the runs saved by Barmes' defense must be weighed against the loss of offensive productivity. One way to measure that trade-off is by looking at WAR (Wins Above Replacement). Cedeno ended last season with a WAR of 1.4; Barmes currently has a -.4 WAR. 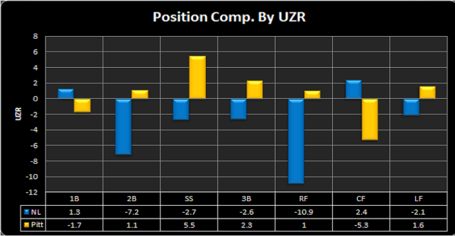 This may be the most important table in this study. Here we look at the defensive development of the Pirates so-called "core four" position players - Andrew McCutchen, Jose Tabata, Neil Walker and Pedro Alvarez. Three years of defensive data are usually needed to make strong statements about a player's "true" fielding talent. Three of the "Core Four" are approaching that three-year mark (McCutchen is at four years).

The most notable result is the improved defense of Walker, Tabata and Alvarez. In particular, Pedro Alvarez has shown much improved range this season. In fact, his RngR is currently the second best in the National League behind Chase Headley.

After a very good defensive year last year, Andrew McCutchen is showing signs of regressing to somewhere between '09-'10 levels. Remember, however, these numbers are volatile. 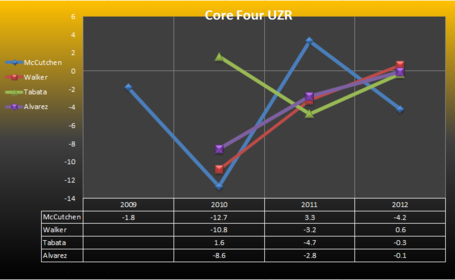 Finally, the last measure of team defense is a metric that I developed earlier this spring called Total Defense Tool (TDT). The TDT uses a modified wOBA formula (wDOBA) to estimate AL and NL standings based purely on different aspects of team defense. The formula is as follows:

Once the TDT coefficient is calculated for each team, it is turned into an estimate of runs allowed, then a Pythagorean win percentage, then predicted wins.

When the actual team totals for the 2011 season are plugged into the TDT formula, it churns out very accurate results. For the 2011 season, the TDT estimates an average of 694.4 runs allowed per team. The actual average runs allowed was 693.6. On a team-by-team basis the correlation between predicted and actual runs scored was .96. The Root Mean Square Error is 21.9 and the R-squared is 92.2.

While the TDT is not necessarily the most sophisticated run estimator (though it is pretty good), its greatest strength is its flexibility. By simply changing the combination of variables that are set to league average, the impact of different skill sets can be isolated and compared. For this study I set up the formula to completely remove the impact of the Pirates pitching staff, thus isolating position players. I did this by first assuming that their pitchers gave up league average rate of different batted ball types (a pitching staff can make team defense look better by giving up less line drives) walks, hit by pitch and home runs. The only variables that were allowed to vary were the number of runners reached on error (ROE) and the wDOBA coefficients for the different batted ball types. These coefficients are calculated separately and then plugged into the formula, i.e. "park adjusted wDOBA for ground balls." (For a fuller explanation of the TDT and examples of its uses, go here.)

In order to just isolate defensive range, I tweaked the formula by setting runners reaching on error (ROE) to league average, along with keeping all pitching related variables to average. Here again we see that the Pirates would be expected to lead the division and are performing better than the 2011 team.

The Pirates defense is performing above league average and is contributing to their early season success. Their greatest weakness is the number of errors they are committing, especially at third base. (Pedro Alvarez has lowest fielding percentage among qualified third basemen in the MLB.)

While the Pirates have pitched well, it is clear that the fielders also deserve credit for the team's above average run prevention. This conclusion is also supported by the ERA-FIP statistic, which shows the Pirates with the second highest difference in the National League (3.39ERA-3.89FIP=-.47). If the fielders can continue to support the pitching, and the pitching limits its regression, the fate of the season will come down to the offense reaching something close to average (currently it is 29 percent below average productivity, wRC+ 71). Of course we all knew that, but hopefully now we REALLY know it.

I'll be back Monday will with a "Return to Average" update. It may be later than usual as I plan on enjoying what there is to enjoy in Cleveland this weekend. Till then consider following me on twitter @davidmanel and make sure to follow @bucsdugout

* Much of this data is culled from Fangraphs.com. It really is a great site.