Share All sharing options for: Orioles Defeat Pirates 12-6 As Your Humble Correspondent Descends Into Confusion

I begin to write this during the seventh-inning stretch of a baseball game between the Pittsburgh Pirates and Baltimore Orioles.

"Take Me Out To The Ballgame" plays over the speakers at Camden Yards, and this particular baseball game between the Pirates and Orioles is the sort where you notice that the seventh inning of a baseball game is a peculiar time to issue a command that you be Taken Out To The Ballgame -- you are, of course, already at the ballgame, and you have, in fact, been at the ballgame far longer than you'd prefer, and the ballgame has degenerated to the point where it suddenly seems more pertinent to make lists of reasons why this is funny, or to assign absurd rankings to your friends' tweets (I'm thinking this one would get "lots" and this one would be "pi," while this one would be ranked "spork"), or to make a "Call Me Maybe" video featuring an anthropomorphized deer shaking his rear end, than to actually recap the game.

Of course, this baseball game between the Pirates and Orioles is also the kind where the Orioles record two hits during the composition of the paragraph above. It is the kind that makes you ask existential questions, such as, "What is a Pirates fan, really?" or, "Why am I paying attention to this?" or, "If Rod Barajas plods around the bases after hitting a three-run homer and no one is there to see it, does it shake the ground?" It is the kind of game where Tommy Hunter takes a perfect game into the fifth inning. It is the kind of game where we take bizarre comfort in the knowledge that whatever weird rabbit holes we've crawled into, Jeff Karstens has crawled into a weirder one. 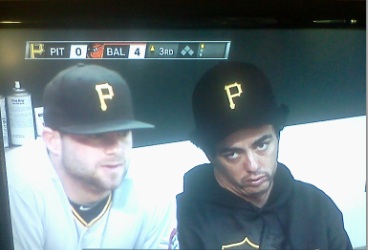 It is the kind of game where, in light of Charlie Morton's injury and Brad Lincoln and Kevin Correia's struggles, Erik Bedard's terrible start (3.1 innings, seven earned runs) suddenly seems downright alarming. It is the kind of game where you start to notice things you hadn't noticed for months or years, such as that Jared Hughes is the Pirates' craziest-looking reliever since Mike Fetters, or that this utterly meaningless Buffalo Tom song references the Orioles for some reason. It is the kind of game where Steve Pearce homers, doubles, and has five RBIs. Just to mess with us. Goodbye, Orioles. We lay bloodied and thoroughly confused as you fly away.

We had a ton of stuff going on here today, between Morton, draft pick signings, and the game, so here are a couple things you may have missed:

-P- The Bucs Dugout Podcast on Morton, the 2013 rotation, and a host of other topics.