Return To Average: The Pirates In Week 10

Share All sharing options for: Return To Average: The Pirates In Week 10

One of baseball's many charms is that it is a good storyteller. It rewards those who pay close enough attention with a daily set of plotlines to follow. Some of them have staying power, and unfold slowly over the course of six months. Others resolve themselves quietly and fade away within the span of a few days. Some are misdirections, and we end up feeling foolish for getting caught up in them. And many change violently in span of a blink of the eye.

Week 10 of the Pirates' 2012 season was full of misdirection and violent change. The mid-week games in Baltimore were an unexpected change in the script, as the seemingly two most stable elements of the team, pitching and defense, capsized off the shore of the Chesapeake Bay. But before any serious fears of a pitching regression could manifest, Friday's game in Cleveland returned us to a familiar, if not more frustrating, theme. Charlie captured the feel of that game when he described it as "Turn Back The Clock To April 2012." The pitching and defense returned to April's form, but so too unfortunately did the offense. Then, just when it looked like the week was a lost cause, out of nowhere the one guy who is the wildcard and could upset all of the projections, Pedro Alvarez, went on a tear and saved the road trip.

So, which of these stories will carry forward into this week: regression from back end of the rotation and bullpen; the "Back to the Future" Bucs; or, the Pedro Alvarez-juiced offense? In the long term it likely will be some combination of all three, with a lot of unexpected plot lines mixed in. However, in the short term it is intriguing which direction this will take, and it certainly makes the upcoming series in PNC Park against the Twins very interesting.

Now to this week's "Return to Average" numbers. (For an explanation of why I'm tracking this, please read here.)

The Pirates played six games this week and scored 31 runs (their most of the season) - for an average of 5.17 RS/G. Their RS/G for the season increased from 3.24 to 3.42. Last week they needed to average 4.62 runs per game to reach NL average by the end of the season. That number has decreased to 4.59. In other words, the Pirates offense will have to score at a rate of 12 percent above projected NL average for the rest of the season in order to reach a NL average number of runs scored. 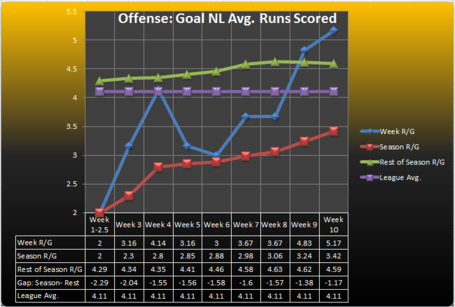 The Pirates played six games this week and allowed 36 runs, an average of 6.00 runs allowed per game (their highest of the season). Their RA/G for the season increased from 3.52, to 3.75. Last week they needed to average below 3.79 RA/G to finish at 90 percent of NL average runs allowed. That number has decreased to 3.66. For the Pirates pitching/defense to finish with 90 percent of league average RA/G, they will have to give up 11 percent fewer runs than expected NL average for the rest of the season. 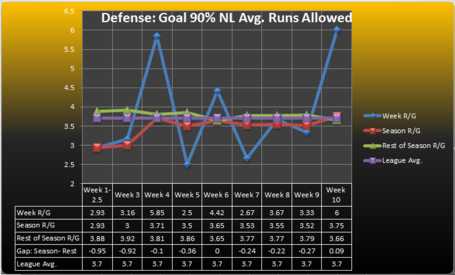 Interpretation: goal is to have the red line remain below the purple line. For the first time this season the red line is above the purple, and the green line below it.

Offense and Pitching Relative to Opponent

The last few weeks I've used this space to look at offensive and defensive efficiency. I'll return to those topics in future updates.

This week I wanted to investigate a question that has become something of a theme in the comment section. Many have wondered whether the Pirates offensive struggles are related to the very difficult pitching they have faced (especially early in the season). To answer that question, I went to Baseball Prospectus , where they track the opposition OPS (oppOPS) statistic for pitchers and hitters. For hitters, they track the aggregate OPS-against for the pitchers each hitter has faced. For pitchers they track the aggregate OPS of the hitters each pitcher has faced. By subtracting the difference between a player's OPS and the oppOPS, we can get an idea of how well a player has done relative to other players who have faced the same competition. It is not perfect way to measure the phenomenon we are interested in, but it is about as close as we can get.

I ran these numbers at both the team and individual level. I have highlighted some of the results that stuck out to me immediately in yellow. I'll leave most of the analysis for the comment section, but I'll just note a few things here: 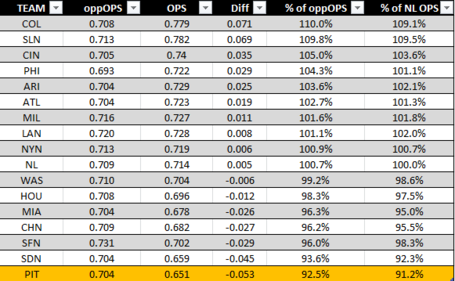 The Pirates OPS is 92.5 percent of what other hitters have done against the same pitchers. That is a slight improvement from a strict comparison to National League average OPS. 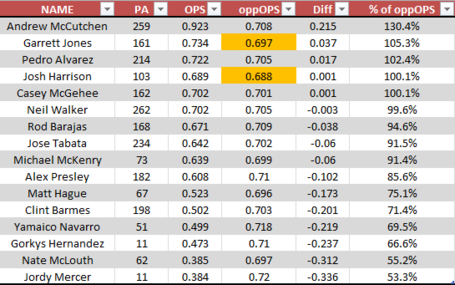 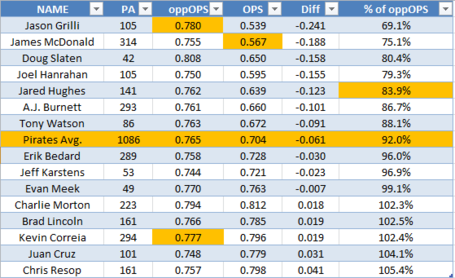 This table really highlights how well the Pirates have pitching staff has performed. Their OPS is a full eight percent lower than opposition pitchers who have faced the same competition.

Finally, as the Offense graph above shows, the Pirates offense has been much better the last two weeks. One way to gauge total productivity is through the wRC+ (Weighted Runs Created+) statistic. Basically, wRC+ compares a team's run creation to league average (100 is average). So, a 97 wRC+ means that a team is producing about three percent less weighted offensive events (singles, doubles, triples etc.) than league average. Or, simply, they are batting three percent below league average.

Below I have broken down the wRC+ statistic for the Pirates over the given time frames. It gives us a nice idea of much the offense has picked up the pace in recent weeks. 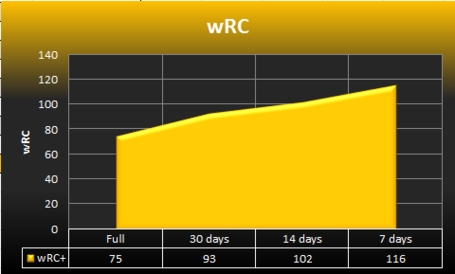 For the last 14 days, the Pirates offense has been above league average.

That's it for this week's "Return to Average." We'll see where things stand next Monday after the Pirates play six games against the Twins (Tuesday-Thursday) and the Tigers (Friday-Sunday). The Twins are allowing an AL worst 5.37 runs per game, and the Tigers an above average 4.59. In terms of scoring, both the Twins and Tigers are slightly below AL average at 4.23 and 4.42, respectively.

I'm working on a few things for mid-week, but I will likely allow the next few games to play-out in order to see what will be of most interest. As always consider following me on Twitter @DavidManel and of course @Bucsdugout.