Return To Average: The Pirates In Week 11

Share All sharing options for: Return To Average: The Pirates In Week 11

Before we get to this week's "Return to Average" numbers and analysis, I want to first say a few words about the just concluded series against the Tigers.

I grew up outside of Detroit and I've been a Tigers fan ever since I can remember. I was in the centerfield bleachers of old Tigers Stadium for both the clinching game of the 1984 World Series and the last game of the 1987 season, when the Tigers beat the Blue Jays 1-0 to win the American East. Growing up I mimicked the pitching delivery of Dave Rozema and, interchangeably, the hitting styles of Alan Trammell, Barbaro Garbey and John Wockenfuss (I defy you to find a kid who grew up in the Detroit area in the 70s and 80s who didn't try to master Wockenfuss' batting stance, to the anger of every little league manager in the area). I terribly miss Ernie Harwell's yearly reading of the Song of Solomon before the first Spring Training broadcast of the season, and I cried the last time I walked out of Tigers Stadium. But, most importantly, the Tigers represent a bond that I've shared with my dad throughout my life. That hasn't changed, and it won't change.

However, in the aftermath of the Detroit Tigers visiting PNC Park, I have to publicly admit to something that I didn't ever think was possible - I decidedly rooted for the Pittsburgh Pirates. The Pirates have become my team, my favorite team.


When I moved to Pittsburgh 15 years ago, I spent the first night at Three Rivers Stadium watching the Freak Show Pirates play the Mets. I knew immediately that I would adopt the Pirates, but I never imagined that they would become as important to me as the Tigers.

Over the years I've attended hundreds of Pirates games and with every passing season I've found myself caring more and more about the franchise and its history. I have also fallen in love with this city, and while that has not led me to have any similar feelings for the Steelers or Pens (especially not the Pens! 2009), there is something special about the connection between this city and its baseball team that makes me feel like a genuine Pittsburgher.

However, I think the deciding factor is something even more personal. After turning 40 a little over a year ago, I struggled with usual the consequences of what that age means to someone who never gave much thought to not being 25-ish. Having spent the winter coming to terms with my new middle age identity, I resolved that this spring I'd try my hand at something that I've always wanted to do: write seriously about the sport that has been a lifelong passion. It is the best decision I could have made. Interacting with and contributing to the Pittsburgh baseball community this season has been nothing less than a joy. Waking up every day and working on the craft of becoming a better baseball writer is even more rewarding and fulfilling than I hoped. I don't know where this will lead, and I don't know how long it will last, but whatever else happens I am happy and, well, actually proud that I gave it a go. So it is for this very personal reason that I have now have such a strong bond with the Pirates, and it is what made it easy to celebrate the series victory over the team of my youth.

Okay, enough of that stuff, time to get to this week's numbers.

Over the past week I shelved all my other projects and spent time studying the family of baseball metrics called "Win Probability Added" (WPA) statistics. I was led to look more deeply at that mathematics and reasoning behind them because I think they may be useful tools for helping us get a firmer handle on the "sustainability of success" issue in which we're all interested. If nothing else, I think they will add to our understanding of what has happened, and provide another way to think about what we should expect going forward. I plan on writing a series of posts using these metrics beginning later tonight. Since there is simply too much I want to cover with the WPAs, this afternoon I'm just going to post the weekly "Return to Average" graphs. (An explanation for why I've been tracking these numbers can be found here.) Enjoy the good news found in the graphs below.

(EDIT - Because of work and life related responsibilities, there WPA-related studies will likely not be posted until later this week.)

The Pirates played six games this week and scored 27 runs - for an average of 4.5 RS/G. Their RS/G for the season increased from 3.42 to 3.51. Last week they needed to average 4.59 runs per game to reach NL average by the end of the season. That number has stayed the same. In other words, the Pirates offense will have to score at a rate of 12 percent above projected NL average for the rest of the season in order to reach a NL average number of runs scored. 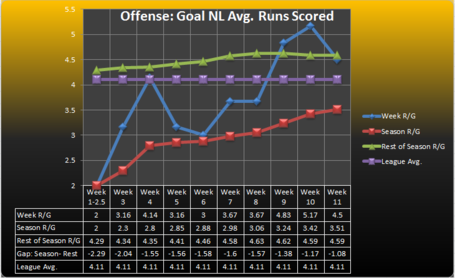 The Pirates played six games this week and allowed 10 (10!) runs, an average of 1.67 runs allowed per game (their lowest of the season). Their RA/G for the season decreased from 3.75 to 3.58. Last week they needed to average below 3.66 RA/G to finish at 90 percent of NL average runs allowed. That number has increased to 3.79 (that is good). For the Pirates pitching/defense to finish with 90 percent of league average RA/G, they will have to give up 9 percent fewer runs than expected NL average for the rest of the season. 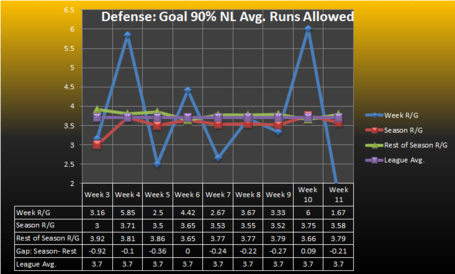 That's it for this week's "Return to Average." We'll see where things stand next Monday after the Pirates play seven games against the Phillies (Monday-Thursday) and three important games against Cardinals (Friday-Sunday). The Phillies are allowing 4.39 runs per game, and the Cardinals 4.10. In terms of scoring, both the Phillies and Cardinals are above NL average at 4.28 and 5.01 (NL highest), respectively.

Like I mentioned, I'm working on a few things that I hope to post later tonight. I appreciate your patience with my nontraditional introduction. For lots of baseball related tweets consider following me on Twitter @DavidManel and, of course, @Bucsdugout.

Finally, here is my favorite picture from what turned out to be just a glorious day (weather-wise) at PNC Park Sunday afternoon. Till later. 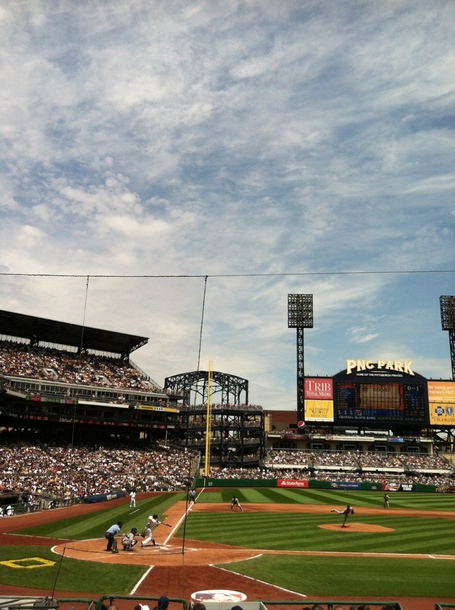