Share All sharing options for: Little Things: The 2012 Pirates Offense

In Monday’s Return to Average post I mentioned that I had been spending a lot of time studying the Win Probability Added family of statistics. In my first attempt at using these statistics in a formal way, I decided to recreate a study invented by Matthew Klaassen of Fangraphs.com and apply it to the Pirates. (You can find Klaassen’s last two updates to his original study here and here.) The question this study addresses is the extent to which Pirates hitters are doing the "Little Things" that assist a team in winning?

What are Little Things?

During the course of any baseball game, players are faced with ever-changing game situations. Some of these situations require them to change their approach. We say that they should change their approach because we recognize that the values of some of the outcomes have changed. For example, in a one run game with a man on third and less than two outs, a batter should not be "swinging for the fences." Why? Because swinging for the fences increases the likelihood of a strikeout, and a strikeout has a much higher negative value in that situation than usual. Rather, a hitter should be concentrating on "making contact." Any form of contact is likely to benefit the team to some degree. Similarly, getting picked off is always bad, but getting picked off first when you are the go-ahead run late in a game is extremely bad and reflects both poor execution and a mental lapse.

So, when baseball fans talk about little things they are recognizing that some game situations create a unique set of values, such that, some outcomes are to be avoided at all costs and other outcomes are less bad than they usually would be. Doing the little things, therefore, involves minimizing the number of most-negative outcomes across game situations. However, it also involves accumulating many small positive outcomes. A successful bunt is one such example. Fouling off pitches in order to draw a walk in front of a power hitter is another. One would always prefer "big things," but since they are relatively rare, doing the "little things" consistently can be an important way of tilting the win expectancy odds in a team’s favor. Over the course a season, little things pile up and lead to a net gain in wins.

Okay, I think we have a sense of what we mean by little things. Now the question is - can we measure it? The answer is, not perfectly. But we do have a metric that gets us as close as we’ve ever been. It is now time to introduce a couple of the Win Probability Added statistics.

As a family of metrics, Win Probability Statistics are designed to isolate how much a player adds or subtracts to the winning of games based on what they do in the contexts in which they find themselves. In other words, they are context sensitive metrics. Statistics like wOBA, OBP, and batting average are context neutral. Think about it this way: a single adds the same amount to batting average regardless of whether a player gets a hit with bases loaded in the 9th inning of a tie game, or the 4th inning of 12-0 game. Similarly, the wOBA formula weighs events according their average contribution to runs. So, a home run is valued at 2.08 (2011) and walk at .72 regardless of the situation.

The first in the family of Win Probability statistics is Win Probability Added (WPA). It weighs everything a batter or pitcher does by the relative importance of the context. A walk with bases loaded in the 9th inning of a tie game is therefore worth more than a double in the 5th inning of 6-0 game. The value of a strikeout by a pitcher in both situations also varies accordingly. In essence, WPA combines the leverage (think pressure) with the situation (men on base, score, inning) to come up with a value for each event.

The second in the family is WPA/LI, or "situational wins," as it is called by its inventor, Tom Tango. What this stat does is detach the leverage of an event from the value of an event, while preserving the weight of the situation. The formula works by normalizing the influence that leverage has on the weighted values of events. The problem with WPA is that because it places so much weight on when events occur that it devalues equally good at bats in similar, but non-high leverage, situations. WPA/LI rewards good situational hitting and pitching in a more equal manner.

In sum, WPA is dramatically affected by the so-called "clutchness" of an event, WPA/LI is not. Instead, it treats every plate appearance as equal in terms of leverage, but it varies the values of the outcomes according to the situation (base, score, inning situation). For example, with bases loaded and two outs in the ninth inning of a tie game, a walk has the exact same value as a home run.

Since doing the little things is not necessarily limited to high-leverage situations, WPA is not the statistic we’re going to want to use. Again, we don’t want WPA because the weight it gives to plate appearances in high-leverage situations ends up mathematically drowning out things like well-executed sacrifice bunts in average-leverage situations. Moreover, we’re not going to want to use the context-neutral statistics because they can’t really account for the value of things like "productive outs." Every out is valued the exact same way in each of those formulas. What we want is a metric that correctly values each event relative to the base/out/inning situation. WPA/LI does that.

In order to isolate how well a team does the little things, WPA/LI is subtracted from the context-neutral statistic wWAA (Weighted Runs Above Average). wWAA is simply wOBA expressed as wins (wOBA is first transformed into runs, wRAA, and then wins, wWAA via Pythagorean formula).

So, when we look at the tables below, we will see a number for wWAA. That number is the expected number of wins above/below average for a team based on its aggregate decontextualized offensive productivity. WPA/LI will highlight the wins above/below average based on situational offensive productivity. Little Things will reflect the difference between the two. A positive number will mean that a team has gained wins above average by doing the Little Things consistently well. A negative number will mean that it losing wins.

I hope this makes sense. I’ll try to answer any questions in the comments section, but I would first point you to the articles linked above for further explanation.

Now to the results:

The Pittsburgh Pirates offense has produced at a level that we would expect to have cost them -6.7 wins. However, their situational hitting, i.e. doing the Little Things, has saved them 3.2 losses. In other words, while their offense has been far below average, it has been less worse when you isolate its performance relative to the real game situations they have found themselves in. 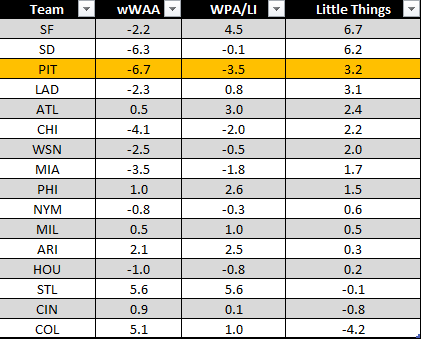 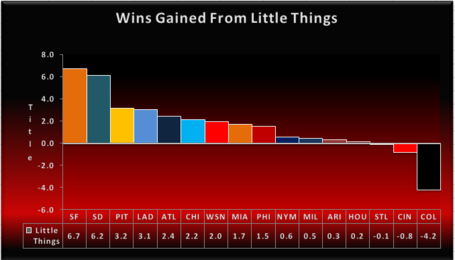 Here we see that Jose Tabata and Alex Presley perform much better in situations where Little Things are valued. We should not confuse these results with saying that we would want either of them at the plate over, say, Andrew McCutchen, when a Little Thing is called for. Rather, this just shows that they have performed significantly better than THEIR average in those situations. 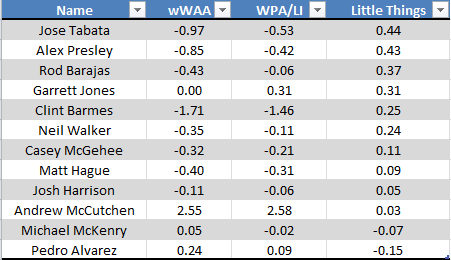 What is not clear in all of this is whether doing Little Things is a repeatable skill. We know that batters must take different approaches in different situations, so we can suspect that there may be some underlying skill involved. However, more research is needed. For now, we can take these results as telling us part of the story of the 2012 Pirates season. Their offense has been positively brutal at times, but it has not punished them as much as it would have otherwise because they have performed better than their average in Little Things situations.

I'm thinking about replicating this study with pitchers. Also, I'm studying ways to use the WPA stat to measure the average gain in wins that a team that performs well above its context neutral stats can expect for a season. I think we'd all agree that the Pirates are not likely to end with context neutral statistics that would reflect that of a winning team. But it is possible that if their contextual hitting and pitching continues to outperform its neutral hitting and pitching that they could hang around for the rest of the season. What I'm curious about is how often and to what degree teams have benefitted from maintaining a significantly better WPA than wWAA. Contextual hitting as measured by WPA is probably not a skill, since it involves "clutchness", but teams have gotten lucky and sustained high WPAs over wWAAs for a whole season in the past. What I want to know is how likely sustaining that luck is. If I get results worth publishing, I will post them coming weeks. In the meantime, I have a few other things I'm working on.