A Preview Fit For Late June: Cardinals Vs Pirates

Share All sharing options for: A Preview Fit For Late June: Cardinals Vs Pirates

One has to be very selective when using adjectives like "important" or "big" to describe upcoming baseball games. Taken in isolation, a single game, or even a three-game series, has minimal impact on the order of things. This is especially true in June.

In addition, conclusions can't be drawn from a small sample of games because baseball's long season means that teams will experience stretches in which they play well above or below their "true" talent level. Furthermore, the fluctuations in performance will be more or less pronounced, both in a positive or negative direction, by their interaction with a force of nature we call luck, or what Machiavelli called fortuna.

For Machiavelli, fortuna is a destructive force of nature that upends the natural order of things. It resembles "... destructive rivers which, when it is angry, turns the plains into lakes, throws down the trees and buildings, takes earth from one spot, puts it in another; everyone flees before the flood; everyone yields to its fury and nowhere can repel it." Elsewhere, displaying an unfortunate understanding of gender and the nature of relationships between men and women, he equates Fortuna with a "woman", which needs to be "mastered" by "bold" action. Only those skilled in virtu (virtue), by which he decidedly does not mean morally correct action, but rather the capacity to do whatever is necessary to overcome the situation that presents itself, have the ability to dominate this disordering goddess of the universe.

The expectation that over the course of a season teams will approach breaking even in their relationships with luck and vicissitudes in performance, is now referred to in modern baseball parlance as "regression to the mean." It is a phrase that comes from probability theory and it reflects the operationalization of another fundamental feature of the universe, what we might call the Jerry Seinfeld force -- namely, that things tend to even out. By looking at baseball statistics, we are sometimes able to perceive how much teams have been affected by hot and cold streaks and Lady Luck. Our expectation of a Return To The Mean implies that we know something about a team's true talent level and its virtu, or capacity to deal with bad luck.

As we look ahead to this weekend's Pirates-Cardinals series, we find two teams that are performing seemingly above and below expectations, respectively. This may be a consequence of the issues just discussed. Conventional wisdom, as reflected in the excellent podcast on this site, is that these teams are due for regressions in opposite directions. Indeed, the situation is somewhat similar to a year ago in late July. Then, the Cardinals visited Pittsburgh with a record slightly below what their Pythagorean and underlying statistics would have predicted (actual record of 52-47, .520 winning percentage, with a .530 Pythagorean expectation) . Similarly, the Pirates were above expectations (51-46, .526, with a .514 Pythagorean). The Cardinals took two of three in that series and went 38-25 the rest of the way, while the Pirates limped home at 21-44. In other words, things not only evened out but they swung steeply in the other direction.

While this series will not itself determine the fate of either team, it does occur against an interesting backdrop similar to that of last season. To further highlight and visualize this underlying storyline of two teams experiencing very different outcomes from what their underlying statistics and our judgments their true talent levels would suggest, I decided to compile some of the relevant statistics and graph them. This long-winded and fairly pedantic introduction (reflecting its late night/early morning composition, I'm sure) has now ended, let's look at the data.

Here I have graphed the WAR (Wins above Replacement) for each team by position. I prorated the WAR contribution of each player based on the amount of playing time at each position. (All data comes from Fangraphs.com.)

Here I graph ERA/FIP/xFIP and ERA-FIP. Large differences between ERA and FIP or xFIP in a negative direction are indications that one should expect a regression in pitching in the direction of giving up more actual runs. The Pirates have the largest negative difference in in ERA-FIP in Major League Baseball. 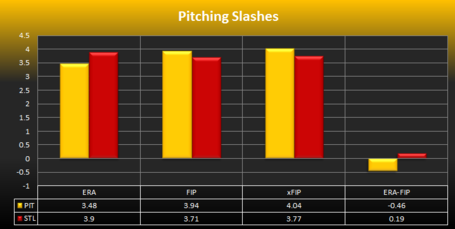 These are the current advanced fielding statistics as measured by Fangraphs. They may be less subject to regression, but they are more volatile due to sample size. The totals are expressed in runs saved or lost (positive numbers are runs saved; negative runs allowed). The descriptions below are copied directly from the fangraphs library. 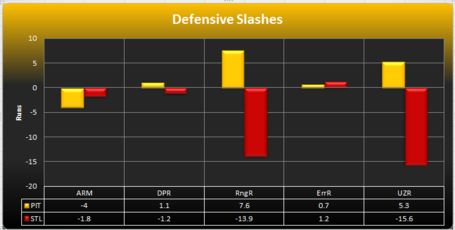 The following chart breaks up the offensive production of each team based on three context sensitive metrics and one context neutral. The results are expressed in wins. I described "Little Things" and "Full Contextual" in this post. I think we are all familiar with "Clutch." Generally speaking, contextual hitting is not viewed as a repeatable skill, and thus most subject to regression.

Finally, from Baseballprospectus.com I compared the 3rd Order Winning Percentage of the Pirates and Cardinals. 3rd Order Winning Percentage takes into account the underlying statistics of each team, plus their quality of opponents to calculate an expected record. Playoff odds take into account both the underlying statistics and remaining quality of opponents. More here.

The overall picture the data presents supports the conventional wisdom entering the series. While it appears that the deck is stacked against the Pirates in the long term, that fact, to me, makes things even more interesting. By the end of the season we'll know whether the Cardinals tamed fortuna or if the Pirates had more true talent than we thought. In the meantime it'll be fun to watch it all unfold. Enjoy the games.