Return To Average: The Pirates In Week 8

Share All sharing options for: Return To Average: The Pirates In Week 8

This is the second installment of our weekly look at Pirates runs scoring and run prevention. Specifically, runs scored are tracked to National League average and runs allowed to 90 percent of NL average. (A full explanation of the reasons for the comparisons can be found here.) Before getting to this week’s updated numbers, let’s briefly look at the week in review.

The first game of the week came on the heels of a ninth inning walk-off (Matt Hague HBP) on Saturday night and a ten run outburst Sunday afternoon. In the first three innings of Monday's series opener against the Reds, the Pirates scored four more runs. At the end of Monday's third inning, the Pirates had scored 15 runs in 13 innings, a stretch that marked both the highest concentration and rate of run scoring this season. Indeed, through the completion of 53 games, those 13 innings still account for 9.2 percent of the Pirates total runs scored this year.

Tuesday and Wednesday, the Pirates scored only three runs combined. But, as has been the story all season, they were rescued by their pitching and still managed to split the two games.

The weekend series in Milwaukee ("House of Horrors") began ominously. In the first inning of Friday night's game, the Pirates failed to convert a sacrifice bunt attempt (#Hurdled?), and allowed a solo home run to Nyjer Morgan. However, over the next eight innings the Pirates bounced back and scored eight runs on their way to rare large-margin victory, 8-2. (Their third six-run margin of victory this season.)

Saturday did not happen due to Major League Baseball blackout restrictions (5-1 Brewers).

Sunday’s first inning reprised Friday’s; McCutchen was caught stealing in a situation that left most of us scratching our heads (#Hurdled?), and Nyjer Morgan scored after getting on base via a Clint Barmes error. Again, the Pirates regrouped, and four home runs later, won 6-5.

In many ways, the weekend series was a microcosm of the season so far. The numbers looked against the Pirates going in (they had won only four of their last 42 in Milwaukee). Questionable managerial decisions led to the giving away of outs, and Clint Barmes’ struggles put the team in a hole. Yet, somehow they tiptoed through it all and won two games. At the end of the week the Pirates find themselves above .500 after 53 games and are all alone in second place.

Now to this week’s updated numbers:

The Pirates played six games this week and scored 22 runs - an average of 3.67 RS/G. Their RS/G for the season increased from 2.98, to 3.06. Last week they needed to average 4.58 runs per game to reach NL average by the end of the season. That number has increased to 4.63. In other words, the Pirates offense will have to score at a rate 13 percent above current NL average for the rest of the season in order to reach a NL average number of runs scored. 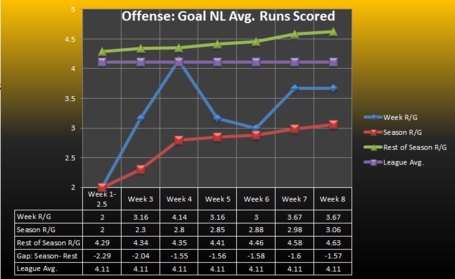 Interpretation: the goal for the Pirates is to have the red line meet with the green line at the purple line.

The Pirates played six games this week and allowed 22 runs, an average of 3.67 runs allowed per game. Their RA/G for the season increased to from 3.53, to 3.55. Last week they needed to average below 3.77 RA/G to finish at 90 percent of NL average runs allowed. That number has remained unchanged. In other words, the Pirates pitching/defense will have to give up nine percent fewer runs than expected NL average for the rest of the season in order to finish with 90 percent of league average RA/G. 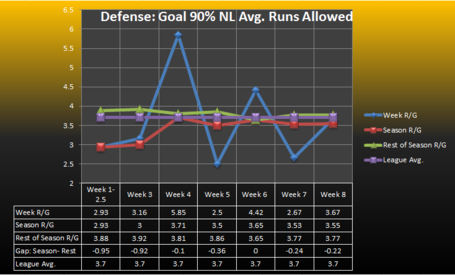 Interpretation: the goal for the Pirates is to have the red line remain below the purple line.

Last week in this space, I compared the Pirates offense to the 1968 White Sox. I’ll return to that comparison in future weeks if it is warranted.

This week I want to introduce a study of offensive efficiency – i.e. whether the Pirates are scoring as many runs as they should, given their total number of singles, doubles, triples, home runs, walks and other offensive events. The idea for this study was inspired by a post on the excellent Detroit Tigers blog called Tiger Tales: A Detroit Tigers Blog.

In order to measure offensive efficiency I went to Fangraphs.com and copied the wRC (Weighted Runs Created) stat and the actual runs scored for each team in the National League. wRC is a measure of how many runs a team should have scored based on what its hitters have done. In other words, it is an estimate of runs scored, based on the totality of offensive events for a team. I subtracted wRC from Actual runs to derive the difference; then I divided Actual Runs Scored by wRC to get an "Efficiency Rate."

A team is efficient if their Actual Runs are even or above wRC (100 percent or above)- it is inefficient if below (under 100 percent). 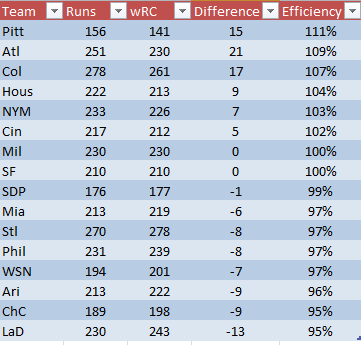 The Pirates offense has been the most efficient in the National League. They have scored 11 percent more runs than they "should" have. Simply put, they are taking advantage of their opportunities – limited as they may be.

The other side of the coin is this – the Pirates should have scored 15 fewer runs than they have. The Pirates offense has only created 141 runs – for an average of 2.71 a game. As unbelievable as it is to say, there is some truth to the statement that the Pirates are in a sense fortunate to have scored as much as they have.

Each week I update the Pirates current Pythagorean record based on the two scenarios:

Here, again, we can see how much pitching and defense are sustaining this team.

Thanks to a suggestion by Horace Clarke in last week’s comment section, this week I am adding a projection of the Pirates record for the rest of the season based on the following scenario:

1. The Pirates score a league average number of runs from this date forward; and the pitching/defense holds at 90 percent of NL average.

If the Pirates offense starts to produce 4.11 runs per game, and the pitching/defense allows 3.77, we would expect the Pirates to finish the season well above .500.

That's it for this week. We'll see where things stand next Monday after the Pirates play six games against the Reds (Tuesday-Thursday) and Royals (Friday-Sunday). The Reds are allowing 3.75 runs per game, and the Royals 4.38. In terms of scoring, the Reds are slightly above NL average at 4.15 runs; the Royals offense has been slightly below AL average, 3.98.

Coming up mid-week, I will be posting a study examining Pirates baserunning. Many fans have observed that the Pirates seem to be a very poor baserunning team and are giving up a lot of outs on the bath paths. We'll put that notion to the test.