Earlier this season there was a lot of talk about the Pirates "lack of fundamentals." In particular, a lot of attention was paid to the seemingly high number of baserunning mistakes. After giving away two outs on the basepaths, and losing by one run last night, it is likely that the baserunning issue is going to receive increased attention in the coming days.

In this study, I put the notion of poor Pirates baserunning to the test. I look at both the percentage of outs and the number of runs gained/lost on the basepaths. The results are mixed bag. The Pirates have given away an above National League average percentage of outs, but overall they have gained runs from the running game. The number of runs they have gained, however, would be larger if they slowed down the rate of outs connected to stolen base attempts.

In order to examine the whether the Pirates are making an above National League average rate of outs on the basepaths, I constructed the following formula: caught stealing 2b + caught stealing 3b + caught stealing home + pick offs + outs on base (caught advancing on fly balls, etc.) / plate appearances with men on base. I then gathered the relevant team data from baseballreference.com. Here are the results. 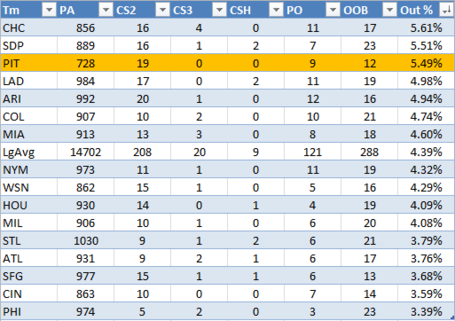 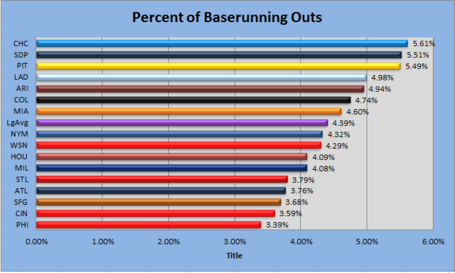 Another way of looking at baserunning is to examine the number of runs gained or lost from the running game. Baseball Prospectus calculates this statistic by breaking down baserunning into five component parts, and comparing a team's rate of "run advancement" in each situation to the average expected advancement. Then, using a Run Expectancy matrix, they transform run advancement into an estimate of number of runs gained or lost. The summing of each of the components is called BRR (Equivalent Baserunning Runs) and is defined as follows, "The number of theoretical runs contributed by a baserunner or baserunners above what would be expected given the number and quality of baserunning opportunities."

I changed the title of the metrics to make them easier to conceptualize. The key is as follows.

Here are the baserunning runs for each National League team, current as of the end of play 6/5/2012. 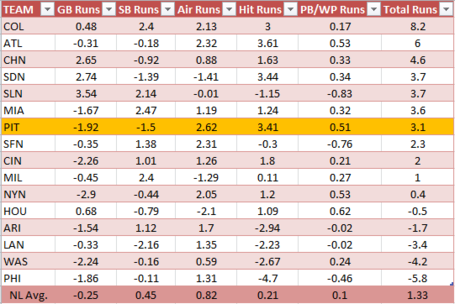 The Pirates have added a slightly above National League average number of runs from their running game. They have gained the third most number of runs on advancement on hits, and they lead the league in fly ball runs. However, they have cost themselves the second most runs on outs connected to stolen base attempts.

Here is breakdown of each baserunning component compared to NL average (Pirates data not included in calculating NL average). 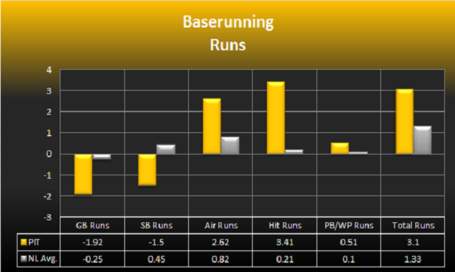 Finally, I looked at the baserunning of individual players on the Pirates. The more interesting results are highlighted in yellow. 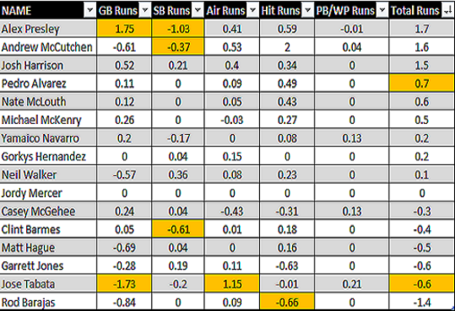 The Pirates have somehow managed to keep their heads above water for the first 55 games of the season with an offense that has been historically bad. The pitching has sustained them, but at some point it will regress. A.J. Burnett (2.06 ERA in his last six starts) and James McDonald (1.56 ERA in his last five starts) will not keep up their current pace, and there are signs that the bullpen may be in line for a sizable correction (2.58 ERA - 3.75 FIP = -1.17 the largest E-F gap in the National League).

In order for the Pirates to hang around .500 and remain in contention, the expected offensive regression to the mean will have to be sizable enough to cover any slippage in pitching. The timing and nature of these corrections will determine the fate of the season. Giving away outs on the basepaths is not a luxury that a team that needs to score more runs can afford.

Overall, the Pirates have added runs via baserunning. The challenge going forward is to continue that trend, while reducing the rate of outs connected to the stolen base tactic. Last night the Pirates lost by one run, while giving their hitters only 25 outs to work with. For a team that is likely to continue to play in an above average number of close games, reducing baserunning outs is important.

I'll be out of town the next few days chasing a golf ball around, but I'll follow the conversation in the comments section as best as I can. I am already working on next Monday's installment of "Return to Average", and trying to incorporate some of the very useful suggestions I received last week. Finally, for plenty (too many?) baseball related tweets, you can follow me on Twitter @Davidmanel. Also, make sure to follow @Bucdugout. Till next week. Have a great weekend.