Return To Average: The Pirates In Week 13 (All Star Edition)

Share All sharing options for: Return To Average: The Pirates In Week 13 (All Star Edition)

Welcome to the All Star break!

I apologize for posting this update a little late (usually it is up Monday mornings). But as those of you who follow me on Twitter already know, I was out of town for most of the week. I just returned a few hours ago and am ready to get back to work (work? this isn't work!). The first order of business is to update our "Return to Average" graphs. I've also quickly pulled together a "War of Position" table for tonight's All Star Game.

Let's get straight to the numbers:

For the second week in a row, the Pirates played seven games and scored 48 runs, for an average of 6.86 RS/G (tied for season high). Their RS/G for the season increased from 3.81 to 4.06. This is the first time this season their average runs scored is over four runs per game. Last week they needed to average 4.41 runs per game to reach the projected NL average by the end of the season. That number has decreased all the way down to 4.16. In other words, the Pirates offense will have to score only at a rate of 1.2 percent above projected NL average for the rest of the season in order to reach NL average number of runs scored. (I have held the NL average at 4.11 on the expectation that current average, 4.22, will drop back in line with 2011 numbers. However, if we don't see some significant movement soon, I will have to increase that average.) (Click graph to enlarge.) 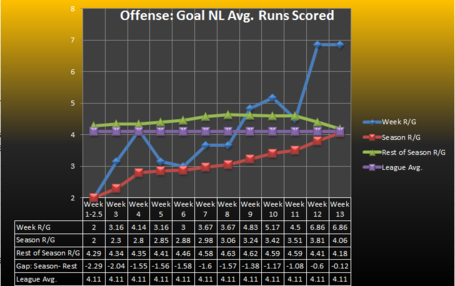 Interpretation: the goal is to have the red line meet the green line at the purple line. For the first time this season they have almost fully converged.

The Pirates played seven games this week and allowed only 22 runs, an average of 3.14 runs allowed per game. Their RA/G for the season decreased from 3.73 to 3.68. Last week they needed to average below 3.67 RA/G to finish at 90 percent of NL average runs allowed. That number has increased to 3.71. For the Pirates pitching/defense to finish with 90 percent of league average RA/G, they will have to allow 9.8 percent fewer runs than expected NL average for the rest of the year. 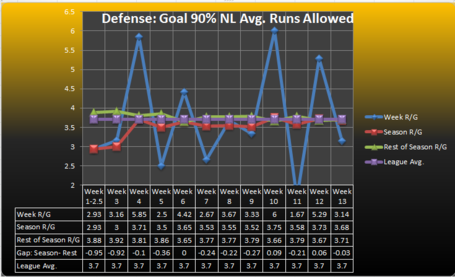 Interpretation: goal is to have the red line remain below the purple line.

I remember after the seventh week of the season that I seriously considered scrapping the comparison of offensive runs scored to NL average. It seemed impossible to imagine that the red, purple and green lines on that graph would ever come close to convergence. Yet, inexplicably, here we are six weeks later and not only is the offensive table almost exactly where it needs to be, but the run prevention numbers have also held up.

As I showed here, a league average offense supported by a defense that only allows 90 percent of league average runs is exactly the formula from which special seasons are made. The Pirates have certainly had a special first half; the rest remains to be seen. We’ll be tracking these numbers closely in the coming weeks.

WAR of Position – All Star Edition

Here I have graphed the WAR (Wins above Replacement) for both the American and National League starting lineups by position. (All data comes from Fangraphs.com.) The American League holds the advantage in six of the ten starting positions.

The positional lineups are as follows: 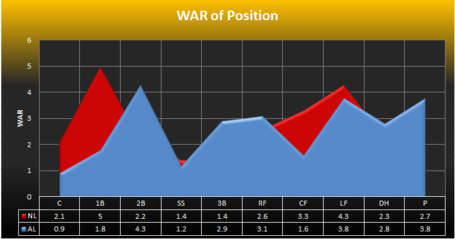 Okay, that's it for this edition of "Return to Average." I'm going to quickly unpack and settle in to watch tonight's game. I have more planned for this week, so make sure to check back in. But for now enjoy the All Star Game everyone.

Consider following me on Twitter @DavidManel and BucsDugout @BucsDugout . Also, make sure to add David Todd for some of the best Pirates-related insights on Twitter @DTonPirates.