Return To Average: Pirates In Week 12

Share All sharing options for: Return To Average: Pirates In Week 12

"How do you like them apples!"- Greg Brown, Pirates Play by Play announcer following Pedro Alvarez's grand slam

At 10:55 Friday night, Pedro Alvarez worked a five pitch walk with bases loaded that scored Jose Tabata from third and gave the Pirates an 11-5 lead over the St. Louis Cardinals. In the context of the game, it meant very little. Brad Lincoln already had put the Cardinals offense on lockdown. In fact, Lincoln's performance was so dominating that after the game wild rumors quickly spread on the internet that he was seen marching in full uniform through the streets of St. Louis towards the Arch, whereupon, like some kind of modern-day superhero, he lifted one of the sides out of the ground and twisted the whole thing into a giant P. (I have been unable to either independently confirm nor empirically verify said event, but I like to believe it happened anyway.)

No, the significance of 10:55 has nothing to do with the game itself. Rather, it marked the first time since April 10 that the Pirates had an even run differential.

Less than 20 minutes later, Andrew McCutchen (who else?) crushed a three-run homer to give the Pirates a positive run differential.

On Saturday afternoon, with everyone still a bit drowsy from celebrating the night before (or maybe that was just me), Pedro Alvarez jarred Pirates fans from their stupor with a first inning grand slam home run. The Pirates cruised to a four run victory, 7-3. With the team's run differential now at seven, Pirates fans woke Sunday morning to this on the team's homepage at baseballreference.com

The Pirates were a over .500 Pythagorean team for the first time since April 8.

The Pirates offensive production in June has put to rest comparisons between them and some of baseball’s historically bad offenses. They are not an offensive juggernaut by any stretch of the imagination, but they aren’t the 1908 Superbas either. Whether what happened in June is simply the natural regression back to the mean, or primarily the result of facing lower-quality pitching (thanks to James Santelli of the Pittsburgh Sports Report for pointing out that this could be part of the explanation), or both (probable), what is certain is that the timing could not have been better.

In June the Pirates' run prevention slipped a bit. They gave up an average of .55 more runs a game than they did in the first two months. However, the escalation in runs allowed was more than covered by the 2.5 increase in runs scored. If regressions to the mean are predictable, their timing is not. I mentioned some time ago that much of the story of this season would be wrapped up not only in the size of the regressions, but their timing. The timing worked out perfectly in June.

I have three different sets of results to present in this week’s "Return to Average." First, I update the weekly runs graphs. The reasons we are tracking runs scored to National League average, and runs allowed to 90 percent of NL average, can be found here and here. Second, I update an excellent post that received a lot of attention on Fangraphs.com titled "The Pittsburgh Pirates Offensive Catastrophe." (I also update some observations I made in a post of a similar nature on May 21 on another website). In order to place everything in context, I would highly recommend first reading Bradley Woodrum’s fine work in the original. Finally, I finish this week’s update with another edition of "War of Position," this time comparing the Pirates to their next opponent, the Houston Astros.

Without further ado, to the numbers:

The Pirates played seven games this week and scored 48 runs - for an average of 6.86 RS/G (season high). Their RS/G for the season increased from 3.51 to 3.81. Last week they needed to average 4.59 runs per game to reach NL average by the end of the season. That number has decreased to 4.41. In other words, the Pirates offense will have to score at a rate of 7 percent above projected NL average for the rest of the season in order to reach a NL average number of runs scored (season low). (Click to enlarge) 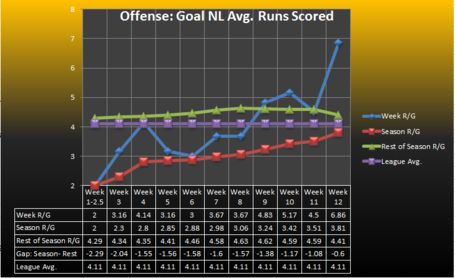 The Pirates played seven games this week and allowed 37 runs, an average of 5.29 runs allowed per game. Their RA/G for the season increased from 3.58 to 3.73. Last week they needed to average below 3.79 RA/G to finish at 90 percent of NL average runs allowed. That number has decreased to 3.67. For the Pirates pitching/defense to finish with 90 percent of league average RA/G, they will have to allow 11 percent fewer runs than expected NL average for the rest of the year. 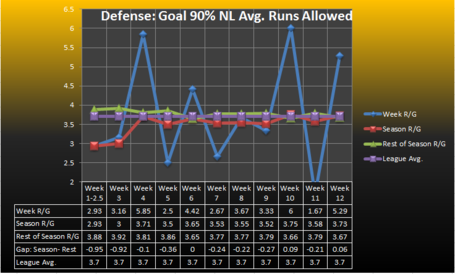 Interpretation: goal is to have the red line remain below the purple line.

I have recreated some of the graphs that Bradley Woodrum used in his Fangraphs piece. The black bars are where the Pirates stood on May 24. The Yellow bars are season totals through Saturday’s game. The red is just for June (red hot Buccos).

This graph looks at wRC+. Basically, wRC+ compares total offensive production to league average. Average is 100. So the Pirates current number, 82, means that their offense has produced about 18 percent below average. For the month of June, the Pirates offense was 12 percent above league average. (Totals for all other teams are for the full season.) 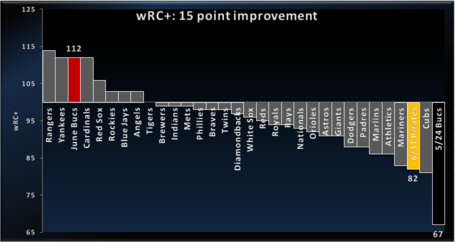 This next graph looks at the Pirates improving K%. They struck out 2.8 percent less in June, lowering their season total by 1.7 percent. They still have the highest strike out rate in the MLB. 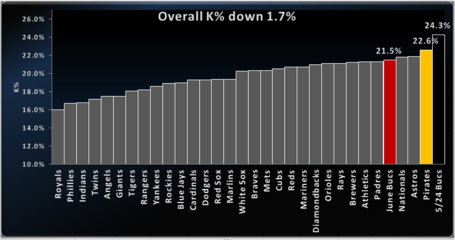 The improving BB%. They walked 1.6 percent more in June, increasing their yearly total by .9 percent. They are no longer last in the league in this category. 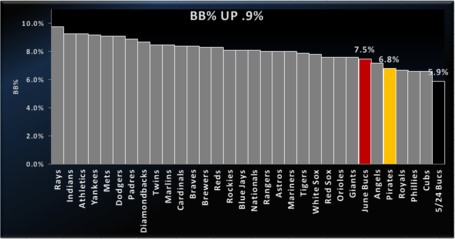 The HR%, which was decent in the first two months, has also improved. 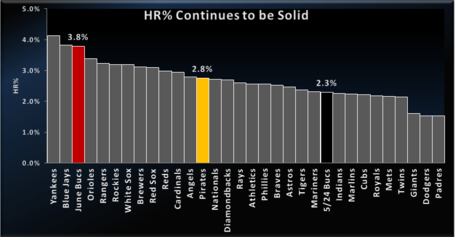 Things are looking better across the board. However, there are some areas where the Pirates are still putting up some eye opening numbers.

Here I have graphed the WAR (Wins above Replacement) for both the Astros and Pirates by position. I prorated the WAR contribution of each player based on the amount of playing time at each position. (All data comes from Fangraphs.com.) At 2b (Altuve) SS (Lowrie) and RF (Bogusevic) the Astros have clear advantages. But that is more than made up by Pirates 3b (Alvarez), CF (McCutchen) and Pitching. 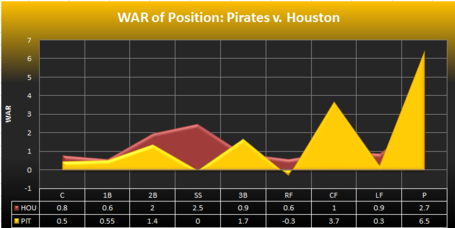 That's it for this week's "Return to Average." We'll see where things stand next Monday after the Pirates play seven games - four against the Astros (Monday-Thursday) and three against the Giants (Friday-Sunday). The Astros are allowing 4.76 runs per game, and the Giants 3.71. In terms of scoring, the Astros and Giants are below NL average at 4.12 and 3.96 respectively.