The Pittsburgh Pirates' Bullpen: Shutting Down, Not Melting Down

Share All sharing options for: The Pittsburgh Pirates' Bullpen: Shutting Down, Not Melting Down

In last night's 4-3 victory over the Miami Marlins, Pirates' relief pitchers preserved a one run lead for four innings. Over the course of those four innings they stranded five baserunners. Twice Pirates' relievers extracted themselves from situations in which the Marlins run expectancy was very high. (Run expectancy is the average number of runs we would expect an average team to score in a given situation.)

Last night's performance by the Pirates' bullpen was not unique. It has been happening all year. While the offensive turnaround in the last month and half has been receiving deserved attention, it's been the bullpen's ability to shutdown innings and leave runners on base that explains much of the reason why the Pirates have a winning record. Indeed, to date, the Pirates bullpen has been shutting down scoring opportunities and stranding runners at a historically high rate.


Over the course of the next week I am going to look at performance of the Pirates bullpen. In particular I'm going to look at the significant contribution that Pirates' relievers have made to the team's winning record. By way of brief preview, here is some of what's ahead: as of July 21st, when one looks only at context sensitive statistics, the Pirates bullpen provides almost exactly the difference between the team having a .500 record and their current record of 52-40. (See below for an explanation of the difference between context-sensitive statistics and context neutral statistics.)

In this post I am going to focus on the Pirates' bullpen's effectiveness in shutting down scoring threats.
We will see that Pirates' relievers are on pace to post the fourth best ratio between shutdowns/meltdowns, and the second most shutdowns per game, since 1974.

In May of 2010 Fangraphs.com introduced two new pitching statistics as substitutes for the flawed "Saves" and "Holds" metrics. The result was "Shutdowns" (SD) and "Meltdowns" (MD). SD and MD are based off of WPA (Win Probability Added), which I describe in detail here. Basically, WPA calculates how much each event in a baseball game adds or subtracts to the probability of winning the game. It then credits the change in probability to the players involved. Here is an example how WPA works taken directly from Fangraphs.com:

The Shutdown and Meltdown metrics utilizes WPA in the following way: (again copied from Fangraphs)

"A Shutdown is when a reliever accumulates greater than or equal to 0.06 WPA in any individual game.

A Meltdown is when a reliever's WPA is less than or equal to -0.06 in any individual game."

As of July 21, the Pirates have a SD/MD ratio of 2.88. They have 92 shutdowns to 32 meltdowns. At their current pace, the Pirates would end the season ranked fourth best out of the 1078 bullpens for which we have data. Here are the top ten: 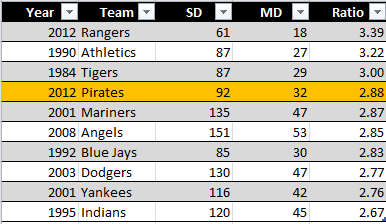 The individual ratios for the Pirates' relievers are: 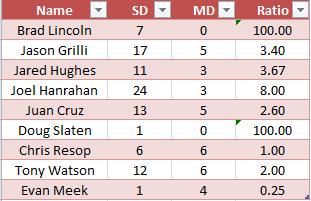 In terms of league leaders, Joel Hanrahan has the second most shutdowns.

Current ratios for the National League 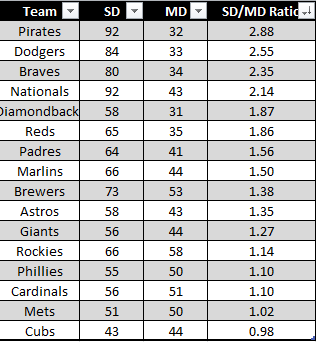 In Friday night’s game, three of the four Pirates relievers (Grilli, Hanrahan, and Hughes) recorded shutdown innings. This is a pattern we have witnessed all season long. Indeed, the 2012 Pirates are on pace to finish with the second most shutdowns per game since 1974. Moreover, this isn’t an isolated one-year phenomenon. They are continuing the pace set by the 2011 Pirates bullpen, which averaged the 7th most shutdown innings per game since the statistic has been calculated. 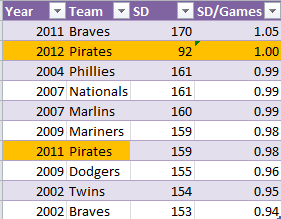 If the Pirates continue their current pace, they will be a historically top ten bullpen when it comes to both the number of shutdowns per game, and the ratio between shutdowns to meltdowns.

That's it for now, be sure to check back later this week as I continue to examine the extraordinary performance of the Pirates' bullpen this season.