Return To Average: The Pirates In Week 15

Share All sharing options for: Return To Average: The Pirates In Week 15

On May 28, I wrote my first installment of the "Return to Average" (hereafter RTA) series for Bucsdugout.com. The second of the three reasons I gave for the project, in general, and tracking Pirates' runs scored to NL average and runs allowed to 90 percent of NL average, in particular, was: "2. if the offense were to have an unexpected and stunning turnaround, allowing 90 percent of NL average runs would make the Pirates pennant contenders." When I wrote that sentence I never seriously thought that we'd witness an "unexpected" and "stunning turnaround." But we have.


Two weeks later, the night of June 10, at 11:38 p.m., the Pittsburgh Pirates were in first place. #FirstPlaceBucs trended nationally on Twitter right after the Tigers beat the Reds on Sunday Night Baseball. Almost immediately the narrative surrounding the 2012 Pirates shifted from their historically awful offense to the question of sustainability.

Today, 50 games removed from the 20-24 low water mark of the season, the Pirates have a run distribution that perfectly suits that of a legitimate pennant contender. They are no longer the "luckiest" team in baseball according to baseballreference.com definition of the term. Not even close. Baltimore now bears the unfortunate moniker of luckiest, with a luck score of 8 games.

What has happened? Over the last 50 games the Pirates have...

The turnaround is stunning, unexpected and dramatic.


This week's RTA tables reflect that of a legitimate pennant contender. They are almost a league average offense, and they are preventing runs at below a 90 percent NL average clip. The offense will not continue its torrent pace, but it shows no signs of falling back off a cliff either. If you haven't bought in, you should. This is a pennant race folks. Enjoy the heck out of it. Now to this week's numbers.

Since the All-Start break, the Pirates have played nine games and scored 45 runs, for an average of 5.00 RS/G. Their RS/G for the season has increased from 4.06 to 4.15. Last week they needed to average 4.16 runs per game to reach the projected NL average by the end of the season (that projection was based on a 4.11 R/G average). That number has increased to 4.39 (because of league adjustment). In other words, the Pirates offense will have to score 3.3 percent above projected NL average for the rest of the season in order to reach NL average number of runs scored. 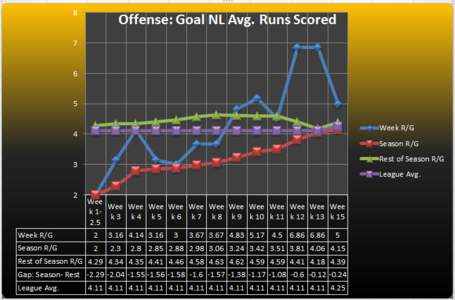 The Pirates played nine games since the All-Star Break and allowed 35 runs, an average of 3.89 runs allowed per game. Their RA/G for the season increased from 3.68 to 3.7. Last week they needed to average below 3.71 RA/G to finish at 90 percent of NL average runs allowed (before league adjustment). That number has increased to 4.01 (because of league adjustment). For the Pirates pitching/defense to finish with 90 percent of league average RA/G, they will have to allow 5.7 percent fewer runs than expected NL average runs for the rest of the year. Considering they have performed 13 percent below league average up to now, this seems very likely.

Currently the Pirates are allowing only 87 percent of projected league average runs per game. 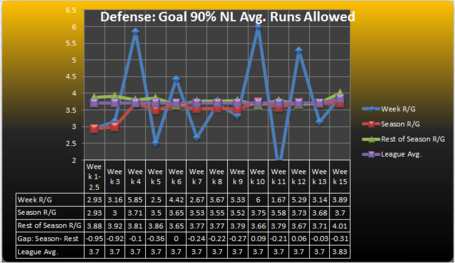 Interpretation: goal is to have the red line remain below the purple line. The lines have the same meaning as those in the first graph, except they are for runs allowed.

Lastly I wanted to display another way to visualize the Pirates' offensive resurgence and season long stability of their run prevention (there have been rather dramatic weekly fluctuations in runs allowed, but over the course of the season the average has remained steady). The following two tables are simply the number of runs scored and allowed for each game the Pirates have played. The numbers on the X-axis are the game numbers. I have added a linear trend line so that we can better appreciate the upward trend in scoring and relative long term stability of run prevention.

That's it for this week's "Return to Average." We'll see where things stand next Monday after the Pirates play seven games - three against the Cubs (Monday-Wednesday) and four against the Astros (Thursday-Sunday). The Cubs are allowing 4.51 runs per game, and the Astros 4.97. In terms of scoring, the Cubs and Astros are below NL average at 3.69 and 3.85, respectively.

That's it for now. I will continue my series on the extraordinary performance of the Pirates' bullpen later this week. If you haven't already, you can read the first installment here. Until then, enjoy the pennant race.