Share All sharing options for: The Pirates' Two Offenses

You can call it a metamorphosis if you think it is sustainable; a regression if you think it was expected; a hot streak if you think it is going to disappear as quickly and violently as it arrived. But whatever you call it, we all can agree that the Pirates offense has experienced a pretty stunning turnaround.

In order to appreciate the extent of the transformation, I decided to compare the Pirates offensive production in first 44 games to that of the last 35. I split the season in this manner because Game 44 (May 23) marks something of a low-point of the season. After 44 games the Pirates were 20-24. That record equaled the most they had been under .500 to that point, and it is the most they have been under since. From Game 45 (May 25) forward, the Pirates have put together a 23-12 record (43-36 total).

The rates are per plate appearance. The numbers speak for themselves, so I'll reserve discussion for the comments section. (Tables after the jump) 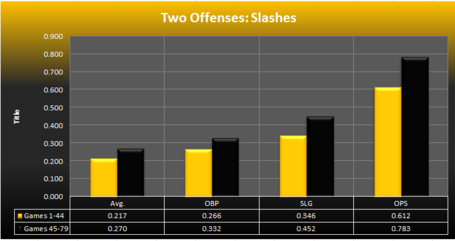 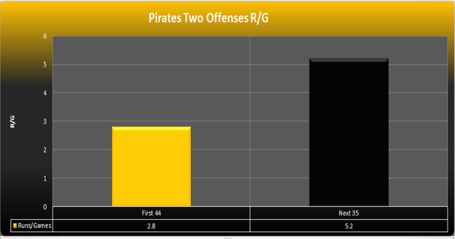