Return To Average: The Pirates In Week 16

Share All sharing options for: Return To Average: The Pirates In Week 16

This is a somewhat-abbreviated installment of "Return to Average" (RTA). For the past two weeks I've been on a pleasantly unexpected and extended basecation (baseball vacation). The end of the road is Wrigley Field and the upcoming series vs. the Cubs (although Cincinnati is looking mighty tempting). I've seen some nice parks, met some interesting people and watched some good games. When I finally return to the friendly confines of my Pittsburgh apartment I look forward to getting back to work and catching up on a few projects that have been sitting on my hard drive. Until then, after the jump you'll find this week's RTA graphs along with a quick update of a study of Pirates' sacrifice bunt attempts that was first posted two months ago:

The Pirates played seven games this week and scored 24 runs, for an average of 3.43 RS/G. Their RS/G for the season has decreased from 4.15 to 4.10. Last week they needed to average 4.39 runs per game to reach the projected NL average by the end of the season. That number has increased to 4.5. In other words, the Pirates offense will have to score 5.8 percent above projected NL average for the rest of the season in order to reach a NL average number of runs scored. (For an explanation of why we are tracking these numbers, check here.) 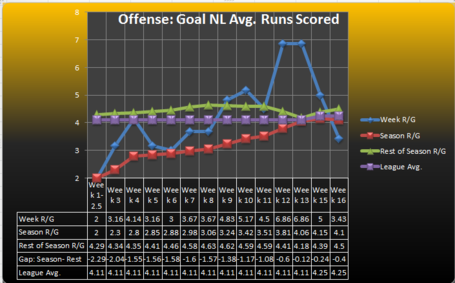 The Pirates played seven games this week and allowed 29 runs, an average of 4.14 runs allowed per game. Their RA/G for the season increased from 3.7 to 3.73. Last week they needed to average below 4.01 RA/G to finish at 90 percent of NL average runs allowed. That number has decreased to 3.99. For the Pirates pitching/defense to finish with 90 percent of league average RA/G, they will have to allow 6.2 percent fewer runs than expected NL average runs for the rest of the year. 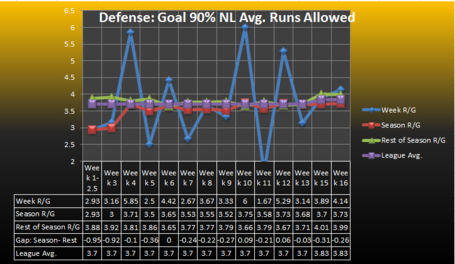 Interpretation: goal is to have the red line remain below the purple line. The lines have the same meaning as those in the first graph, except they are for runs allowed.

On May 31 I examined Clint Hurdle's use of the sacrifice bunt. The impetus for the study was the increasing frustration that Pirates fans were expressing over the perceived overuse of the tactic. One of the key findings was, "Pirates fans' intuitions are correct: the Pirates do employ the sacrifice bunt tactic at a rate much higher than league average. Indeed, almost across the board, they attempt sacrifice bunts at a rate almost double that of MLB average."

However, at the time I added the caveat that the Pirates were playing in one of the lowest scoring run environments in the past 50 years. In such a context, the conventionally held view that it is always a bad idea to give up outs for bases is not as clear-cut.

As the graphs above illustrate, over the last seven weeks the run environment in which the Pirates have played has increased dramatically. I was curious if this change had affected Hurdle's use of the tactic.

Using Play Index at BaseballReference.com, I compared the rate at which Pirates' position players attempted sacrifice bunts in the first two months of the season to the last two months. I broke up attempts by the following base/leverage situations.

Over the last two months, the rate of sacrifice bunts attempts by Pirates' position players in high leverage situations has dropped by more than half. For the season, Pirates position players have now only attempted sacrifice bunts in 3.5 percent of high leverage situations. Over the past two months the Pirates have employed the tactic at a rate less than MLB average.

Over the last two months, the rate of sacrifice bunts attempts by Pirates’ position players with runners on second, has dropped by over 30 percent. For the season, Pirates position players have attempted sacrifices in 7.2 percent of these situations. However, over the past two months the Pirates have employed the tactic at a rate that is still more than double MLB average

The frequency of sacrifice bunt attempts by Pirates’ position players has dropped dramatically in the past two months. The drop coincides with the Pirates offensive turnaround. Whether the drop in attempts reflects a tactical adjustment to an increased run environment, or is in fact part of the reason for increased run production, is certainly an interesting question. Likely it is some combination of both, with most of the weight being on the former explanation.

That's it for this week's "Return to Average." We'll see where things stand next Monday after the Pirates play six games -- three against the Cubs (Monday-Wednesday) and three against the Reds (Friday-Sunday).