This study examines which position players had significantly better and worse seasons in 2012 than 2011. By David Manel

In the middle of my gentlemanly and appropriately-understated New Year's Eve celebration I had more than sufficient opportunity to reflect on whether my life improved over the past year. I'm sure I'm not the only one that engaged in such an end-of-year self-evaluation. However, I'm fairly certain that I'm one of exactly two people for whom David Todd's disembodied voice played a role in this year's deliberations. Let me explain.

I recall three distinct themes that emerged from those minutes-turned-into-hours of self-reflection:

First, as I looked out over Saco Bay, Maine, with a Gritty's Christmas Ale firmly in hand, I was haunted a voice in my head that sounded eerily similar to Mr. Todd's (970 WBGG-AM ESPN, 2-4) reminding me of the principle of arbitrary end points. Life is an ongoing narrative with only one true end point. Breaking it up into arbitrary yearly chunks every January 1 and evaluating its quality is pointless and tells us very little. This made me feel pretty good because of the second theme.

Second, if I were to create a line graph of the past twelve months of my life, the arc would bear an uncanny verisimilitude with the last two Pirates' seasons.

Third, as the evening progressed and the Gritty's diminished, my thoughts naturally turned to baseball. While the existential question of whether my life had significantly improved in the past year yielded conflicting answers that were not easily quantifiable, I realized I could easily discover which baseball players had significantly better/worse seasons in 2012 than 2011. Curious to answer that question I retired to my bedroom, booted up the computer and headed over to Fangraphs.com for answers. Below are the fruits of my investigation.

(Happy New Year's everyone in Bucs Dugout community. It is great to be back writing about baseball again and I can't tell you how much I'm looking forward to the coming season. I promise the tortured introductions will slowly improve as the year the progresses.)

Which players had significantly better or worse seasons in 2012 than 2011?

For position players, WAR it takes into account offensive production, defense, baserunning, playing time and the importance of the position played. WAR for pitchers takes into account runs allowed above what a replacement pitcher would allow, with adjustments for relievers and starters. WAR is an excellent statistic for this analysis because it provides a total overview of a player's contributions.

Standard WAR credits players for playing time. In this analysis I wanted to put all players with over 400 plate appearances in both 2011 and 2012 on an equal footing. In other words I did not want to punish players for their injuries or managerial decisions. Instead I wanted to just look at the quality of their play in the games that they played.

In order to neutralize playing time, I scaled each player's WAR to 150 games played, or 633.33 plate appearances. So, the WAR/150 numbers I report here are the WARs that players would have accumulated if they had played in 150 games, at the same level of performance, in both 2011 and 2012. 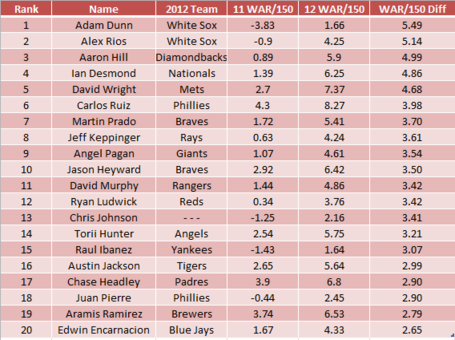 Adam Dunn's WAR/150 increase was most affected by his resurgent power numbers. His slugging percentage increased from .277 to .468. 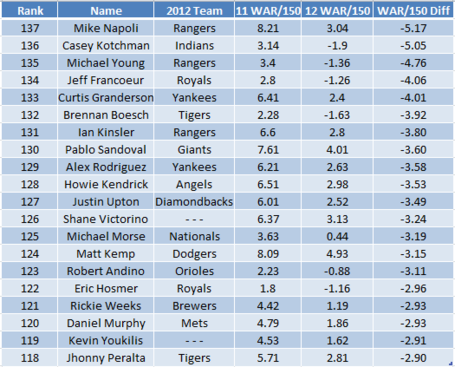 The most noticeable drop off in Curtis Granderson's game was his fielding and baserunning. He went from -5.1 to -17.8 runs allowed on defense, and from 6.3 to 2.3 runs gained baserunning.

For the Pirates I reduced the number of plate appearances from 400 to 200. This allowed me to include more players. 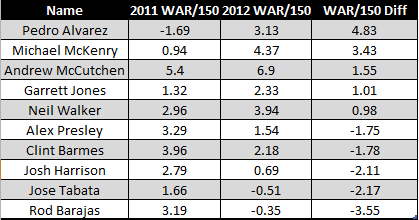 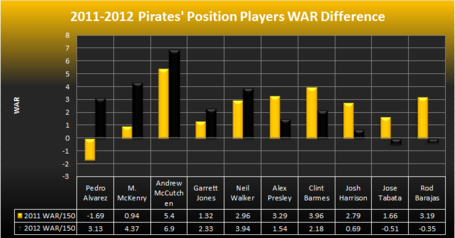 While Andrew McCutchen's fielding dropped from 3.5 runs saved to -6.9 runs allowed, it was more than offset by an increase of OPS from .820 to .953.

As all Pirates fans know, Rod Barajas was a defensive nightmare when it came to throwing out would be base stealers last season. This led to a fielding number of -7.6 runs allowed, compared to 1.9 in 2011. Barajas offense dropped too, but not as significantly .717 OPS to .625 OPS.

A total of 137 players qualified for this analysis - i.e. had over 400 plate appearances in 2011 and 2012. Out of that 137, four Pirates made the study: Andrew McCutchen, Garret Jones, Neil Walker and Clint Barmes. Moving from most improved, 1, to largest drop-off, 137, the four Pirates ranked as follows: McCutchen 34th, Jones 42nd, Walker 43rd and Barmes 101st.

I am working on the data for starting pitchers, relief pitchers and team totals. I'll try to post those results in the coming weeks.

Also, the ZiPS projections for the Pirates will be posted at Fangraphs.com this Monday. I'd like to play around with that data and run different scenarios to see if we can't get an early indication of what to expect from the 2013 version of the Buccos. Hopefully I'll have something by the end of the week.