An alternative approach to selecting the Comeback Player of the Year

Share All sharing options for: An alternative approach to selecting the Comeback Player of the Year

On Monday, Francisco Liriano was named NL Comeback Player of the Year by the Sporting News. The award is based on the vote of a panel of 186 Major League players, who are divided by league affiliation. Liriano received a solid majority of the votes cast by National League players (58 votes).

I have no problem with Liriano winning the award. He was much better in 2013 than he was in 2012, and he certainly exceeded all preseason expectations. Most importantly, Liriano’s bounceback season was a vital part of the Pirates’ improbable postseason run.

However, yesterday’s announcement did make me curious about whether it was possible to quantify this phenomenon of "Comeback Player." In other words, can we put a single number on the amount of Bounce Back/Comeback a player achieved? Using the statistic WAR/150, I think we can.

Before getting to the results, I briefly explain the logic behind the study and the WAR/150 metric. That is followed by  rankings of players by greatest Comeback AND Drop-Off seasons. Finally, I dedicate the final two sections to looking just at Pirates' players.

Which players had significantly better or worse seasons in 2013 than 2012?

First, I separated out players by their roles. Using Fangraphs, I collected all position players and pitchers that had over 300 plate appearances or 100 innings pitched in 2012 and 2013. Then, I simply calculated and subtracted each player's 2012 WAR/150 (Wins Above Replacement/ 150 games) from their 2013 WAR/150.

I require that players accumulate significant playing time in both 2012 and 2013 to qualify for the study. The reason for this is that I’m interested in performance changes from one year to the next. In other words, my definition of Comeback does not include bouncing back from injury. My approach ranks players based on how much they increased their total performance from one year to the next.

For position players, WAR it takes into account offensive production, defense, baserunning, playing time and the importance of the position played. WAR for pitchers takes into account runs allowed above what a replacement pitcher would allow, with adjustments for relievers and starters. WAR is an excellent statistic for this analysis because it provides a total overview of a player's contributions.

Standard WAR credits players for playing time. In this analysis, I wanted to put all players with over 300 plate appearances (or 100 innings pitched) in both 2012 and 2013 on an equal footing. In other words I did not want to punish players for their injuries or managerial decisions. Instead, I wanted to just look at the quality of their play in the games that they played.

To neutralize playing time, I scaled each position player's WAR to 150 games played, or 633.33 plate appearances. So, the WAR/150 numbers I report here are the WARs that players would have accumulated if they had played in 150 games. (For pitchers, the WAR/150 numbers represent roughly 150 innings pitched.)

So, in sum, WAR/150 tells us what a player’s aggregate WAR would have been if he had played in 150 games at the same level of performance he displayed in the actual number of games in which he participated.

My Definition of Comeback Player of the Year:

The Comeback Player of the Year is the player who showed the greatest increase in his performance from one year to the next. It may be more accurate to call him the "Most Improved Player." We discover this player by first excluding all players that did not log significant playing time in both 2012 and 2013. Figuring out the appropriate playing-time thresholds is, of course, somewhat subjective. However, I think the concept of thresholds is important. I want to narrow in on the players that showed consistent increased performance over a long period.

On the other hand, I don’t want players to be punished for unlucky injuries or managerial decisions that shortened their season to some limited degree. That is why I standardize WAR scores to WAR/150.

Now to the results:

Comeback and Drop-Off Among Position Players

Below are the Top-10 Comeback position players according to the positive gains in WAR/150: 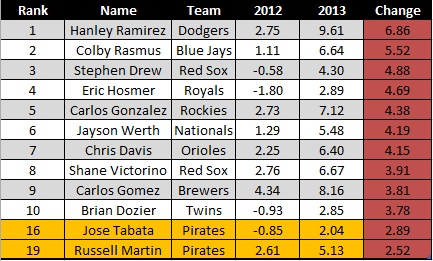 Now, the position players who experienced the largest drop-off: 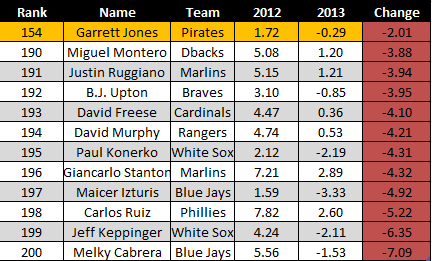 Of interest here for Pirates’ fan is Giancarlo Stanton, who the Bucs seemed show interest in acquiring late last season. He experienced the fifth-worst drop-off in performance in 2013.

Comeback and Drop-Off Among Pitchers

Here are the 10 pitchers with the largest WAR/150 gains:

Below are the pitchers that experienced the largest drop-off:

Pirates Players Improvement and Drop-Off in 2013

Below is change in WAR/150 scores for all qualified Pirates.

Jose Tabata, Russell Martin and Gaby Sanchez had much improved seasons, while Garrett Jones experienced a significant drop off. Andrew McCutchen significantly improved on what was already an elite level of performance in 2012.

Both Francisco Liriano and A.J. Burnett had nice upticks in performance in 2013.

I also calculated the past four years of WAR/150 scores for selected Pirates' position players. I think this information provides an interesting way to visualize the performance trajectory of each player. I also calculated and included the projected 2014 WAR/150 scores for each player based on the recently released Steamer projections at Fangraphs. 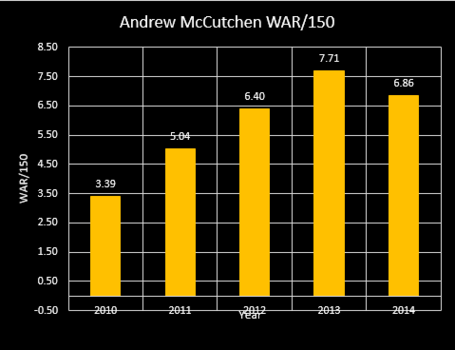 Andrew McCutchen’s performance has consistently improved since 2010. Steamer projects him to level off closer to his 2012 performance in 2014. 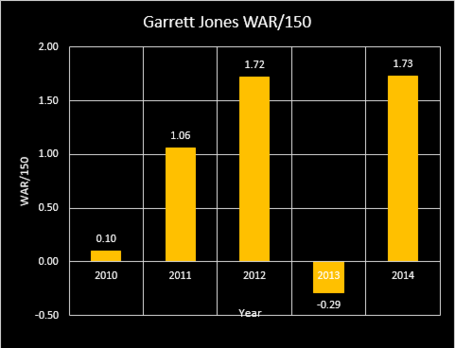 After two years of improving performance, Garrett Jones had a terrible 2013. Steamer sees him bouncing back to 2012 levels in 2014. 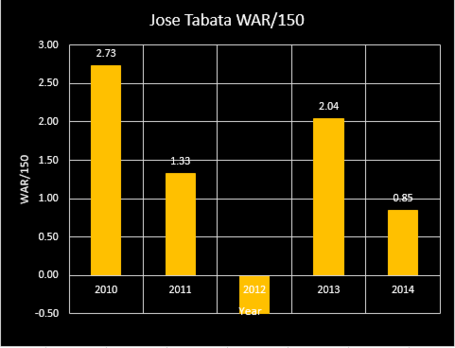 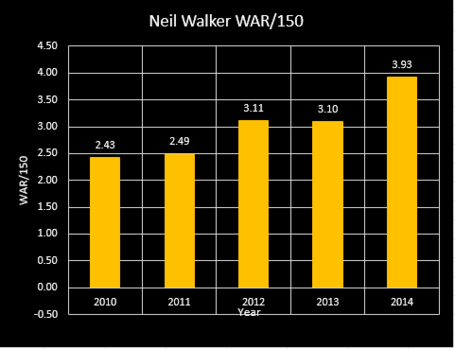 Neil Walker has been a model of consistency. He has slowly improved his performance, and is projected to experience a significant jump in 2014. 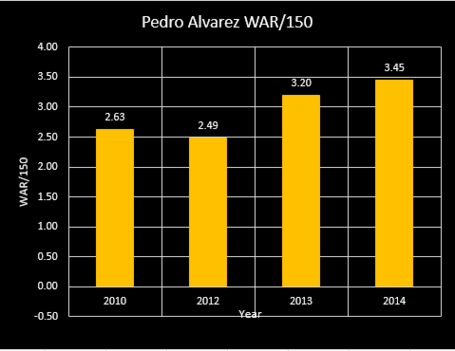 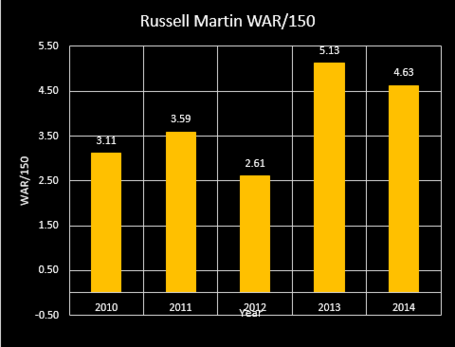 Russell Martin had a huge jump in performance in 2013. Steamer projects only a slight drop-off for him in 2014. 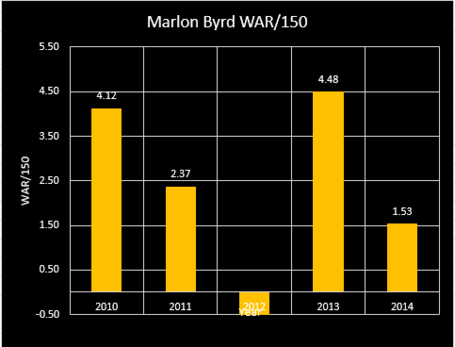 The WAR/150 statistic gives an interesting way to look at changing levels of performance from one year to the next. Perhaps its greatest strength is that it boils everything down to an easy-to-understand number. Moreover, it works well for our purpose here because, unlike standard WAR, players are not being credited/punished for playing time. As such, WAR/150 isolates performance change in all its dimensions – baserunning, hitting, fielding etc. – and, thus, provides one way to quantify the Comeback phenomenon.