Breakout or Collapse: A look at the Pirates' 'high-beta' roster

A look at the Pirates' 'high beta' roster using the PECOTA projection system.

Share All sharing options for: Breakout or Collapse: A look at the Pirates' 'high-beta' roster

There appears to be a growing consensus that the Pirates' 2013 roster will feature an unusually large number of "high beta" players. "Beta" is a statistical measure of risk used by financial investors. High-beta stocks are high-risk stocks, meaning that they are considered highly volatile in relation to the market as a whole. A high-beta baseball player, then, is one who has a decent chance of either producing well above average, or doing very little.

David Todd first introduced the term "high beta" to the Bucs Dugout community in a podcast a few months ago in reference to Francisco Liriano and his projected performance in 2013. Subsequently, Tim Williams and Charlie both posted articles in which they listed additional players who they thought fit the description (Tim's list; Charlie's list).

In light of this discussion I took great interest in the recent publication of Baseball Prospectus' 2013 PECOTA projections. One of the fascinating and unique features of the PECOTA projections system is that it calculates each player's probability of "breaking out", "improving", "collapsing", or suffering from "attrition" in the season ahead. In other words, it provides a nice measure of volatility, or "beta."

In the tables below I first provide a list of players on the Pirates roster that PECOTA sees as high-beta. In other words, these are players with significantly higher/lower than league average probabilities of breaking out, improving, etc.

Next, since Francisco Liriano was the player that sparked this analysis, I decided to compare the volatility of Pirates projected starting pitchers as group with other staffs in the National League. To accomplish this, I simply averaged the "breakout", "improve", "collapse" and "attrition" for each team's starting pitchers. I should note that I only included pitchers who are projected to make at least fifteen starts next season.

These definitions are quoted straight from the Baseball Prospectus glossary.

"Breakout Rate: Breakout Rate is the percent chance that a player's production will improve by at least 20 percent relative to the weighted average of his performance over his most recent seasons."

"Improvement Rate: Improve Rate is the percent chance that a player's production will improve at all relative to his baseline performance. A player who is expected to perform just the same as he has in the recent past will have an Improve Rate of 50 percent."

"Collapse Rate: Collapse Rate is the percent chance that a position player's true runs produced per PA will decline by at least 25 percent relative to his baseline performance over his past three seasons."

In keeping with Baseball Prospectus' Fair Use policy, I have only included players that had probabilities that were significantly above/below league average in the cells that I report data. If a cell is blank, or a player is missing, you can assume the player is close to league average for that projection. I only included players that have a high likelihood of contributing to the 2013 team. 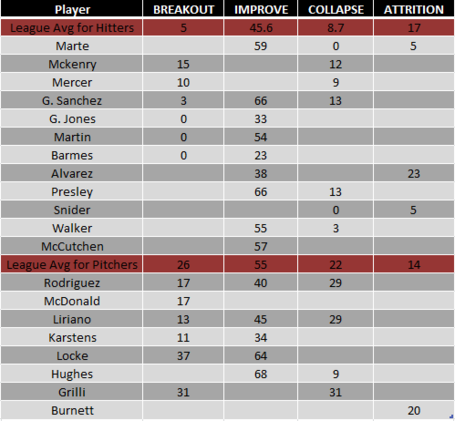 Pedro Alvarez: PECOTA does not give Pedro a very high probability of improving on his baseline performance.

Martin: unlikely to break out.

McKenry: much higher than league average probability of having either a breakout or collapse year.

Barmes: PECOTA does not see much chance of improvement.

Locke: very high likelihood of improving on his baseline performance.

Rodriguez, Karstens, McDonald, Liriano: unlikely to break out, and with the exception of McDonald, PECOTA doesn't see much probability of improvement.

Grilli: fairly high probability of either a collapse or breakout season.

Here I compare the volatility of all the starting pitching staffs in the National League. I simply averaged the "breakout", "improve", "collapse" and "attrition" for each team's starting pitchers. For each team I only included pitchers who are projected to make at least fifteen starts next season.

The Pirates pitchers that are included in this analysis are Burnett, Rodriquez, McDonald, Liriano, and Karstens. 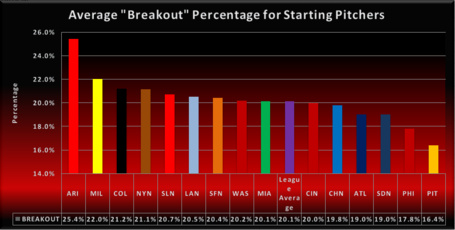 The Pirates staff has the lowest average aggregate breakout probability. 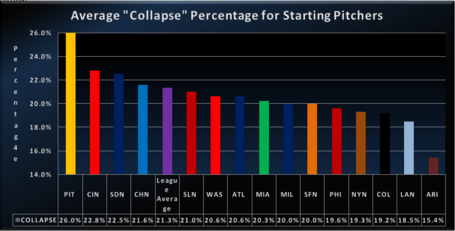 The Pirates' staff has the highest average aggregate collapse probability. 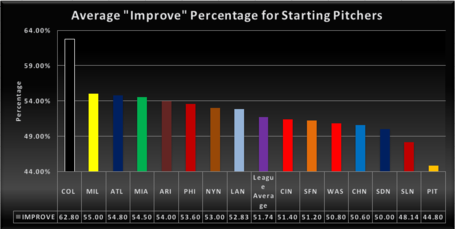 The Pirates staff has the lowest average aggregate improve probability. 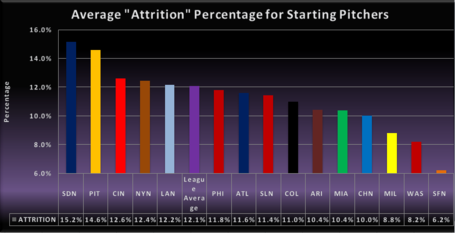 The results for the Pirates starting pitching staff are a bit disturbing. With the exception of A.J. Burnett, none of the starting pitchers have a league-average probability of a breakout season. Moreover, Karstens is seen as unlikely to improve; Liriano and Rodriquez are candidates to collapse; and Burnett has a high attrition probability. Clearly, starting pitching will be something to keep an eye on this season.

I did a similar analysis of the position players and the Pirates were much more around league average in that regard. On the bright side, core players like Marte, McCutchen and Walker have high probabilities to improve. On other hand, PECOTA does not see a high probability of Pedro Alvarez improving. McKenry is a wildcard.

In sum, it does appear that the Pirates do have an interesting roster full of high-beta players. If I were to make a summary statement of what PECOTA projects it would be that as a group the Pirates' position players are mixed bag. Many players have decent chance of improving, with Jones and Alvarez as notable candidates to decline. On the other hand, the pitching staff, in particular the starting staff, has many players who are a threat to decline.