Another look at the 2012 Pirates Jekyll-and-Hyde offense

A comparative look at the Pirates' offensive variability.

Share All sharing options for: Another look at the 2012 Pirates Jekyll-and-Hyde offense

The roller-coaster ride that was Pittsburgh Pirates' offense in 2012 remains one of the defining narratives of last season's campaign. The dramatic and abrupt changes in offensive productivity were unlike anything I can remember witnessing from a team that I've followed closely. Over the course of a long season, all teams go through hot and cold stretches, but the extreme nature of the Pirates' streaks were jarring. To refresh our memories, let's quickly look at the three unique manifestations of the Pirates offense in 2012:

From April 6 to May 23 the Pirates offense was, well, historically offensive. Over the first 44 games of the season they posted a .217/.266/.346 slash line and averaged a paltry 2.86 R/G. Thanks to a pitching staff that limited opponents to 3.63 R/G and a good dose of luck in close games (Baseballreference.com calculated the Pirates' "Luck" score at 4 during this stretch, highest in the National League), the Pirates kept their heads above water and rode out the slump to a respectable 20-24 record.

When all was said and done, the Pirates finished the season with a pedestrian .699 OPS, No. 11 in the National League. Indeed, the offense ended up posting numbers that were largely in-line with preseason expectations. There was nothing terribly exceptional about the offense other than its Jekyll-and-Hyde nature.

Recently I became curious whether any other teams in the National League had experienced similar wild swings in offensive production last season. To find out I put together this little study.

2. Calculated each team's deviation from their season-ending OPS for each 10-game span, so 152 data points.

3. Added the deviations and divided by 152 to get an average 10-game deviation. The higher the deviation, the more volatile a team's offense in 2012.

4. Repeated the same process for each team's pitching staff, using OPS against.

In the table below are the average 10-game deviations in OPS for each National League team. So, the .0695 number for the Dodgers means that, on average, their OPS was .0695 above or below their season average in each 10-game stretch.

Surprisingly, the Pirates ended up with only the fourth-highest average variance. I did not expect this. The Phillies and the Cubs had the most consistent offenses. I also included age, slugging percentage and wins to see if there was any relationship between these variables and volatility. There does not seem to be any relationship. 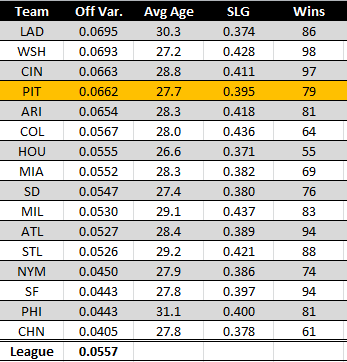 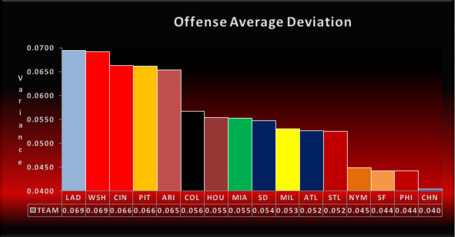 No surprise here -- the Pirates' pitching was fairly consistent all season. They came in well below league average in terms of variability. 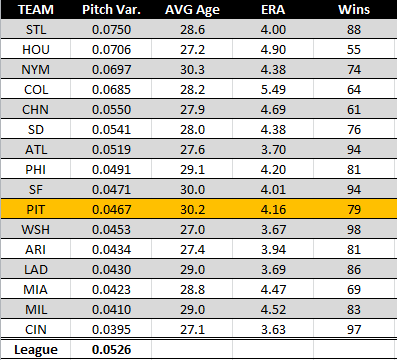 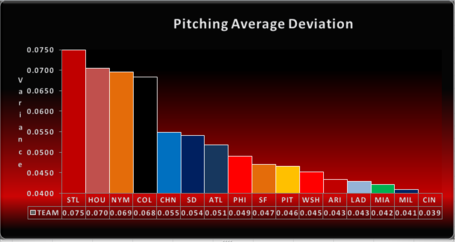 The Pirates rank No. 6 overall. The World Series champion San Francisco Giants were the most consistent team in the National League. 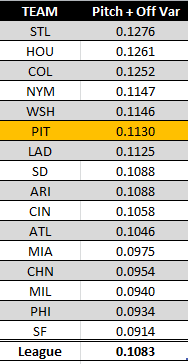 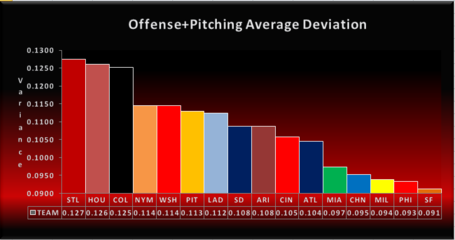 I also wanted to visualize the length and intensity of each team's hot and cold streaks. In the tables below, the X-axis is the team's overall OPS. Each line represents the difference in OPS over each 10-game sample.

The Pirates' OPS in 2012 was .699. This graph clearly shows the volatile nature of the offense during the first 90-plus games. Indeed, their average deviation from .699 over that period was a rather-remarkable .093. 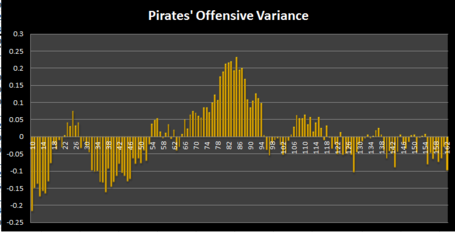 Here is the league's most volatile offense, the Los Angeles Dodgers (OPS .690). It is interesting to note that for the first 110 so data points the Dodgers' bar graph looks almost exactly like an upside-down version of the Pirates'. 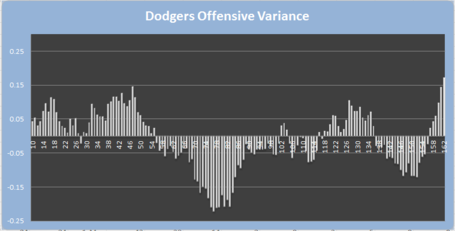 And the league's most consistent offense, the Chicago Cubs (OPS .680). 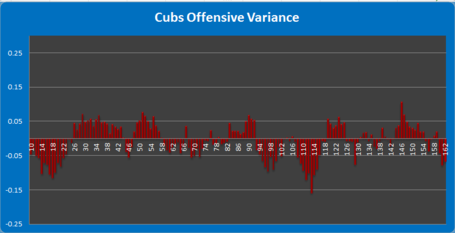 Finally, a league-average offense in terms of variability, the Houston Astros (OPS .673) 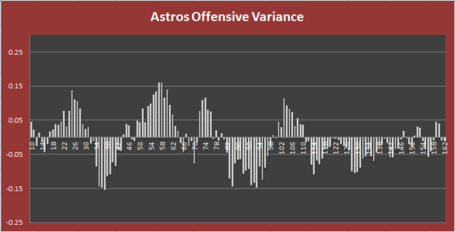 The Pirates OPS-against in 2012 was .703. If you look at the Pirates' offensive and pitching tables you can see The Collapse pretty clearly. For the last third of the season the pitching went through its longest cold streak (that's where the graph is actually above the line, since the OPS-against is higher) and the offense went through another slump. 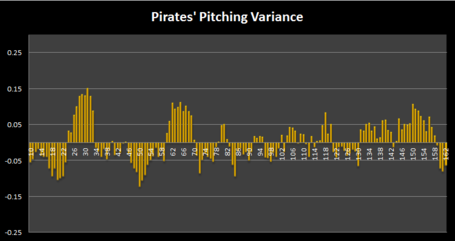 Here is the graph for the league's most volatile pitching staff, the St. Louis Cardinals (OPS .700) 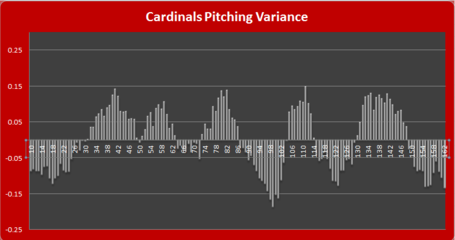 And the league's most consistent pitching staff, the Cincinnati Reds (OPS .695) 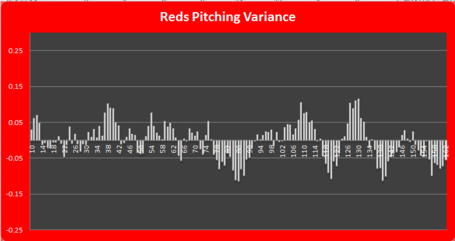 A league average pitching staff in terms of variability, the Atlanta Braves (.684) 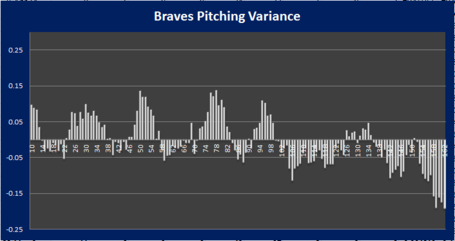 The explanation for why some teams experience dramatic variability and others do not eludes me. Looking ahead, it would be interesting to see if there is some variable that correlates with high/low-variability. However, my guess is that it's just random.

What is clear, however, is that performance variability (or the lack thereof) is always an important storyline when describing a team's season. The defining meta-narrative of the Pirates' 2012 campaign is the bottoming out of the Pirates offense in the first two months; its dramatic resurgence in the middle months; and then its leveling back out.