Return to average: The Pirates in Week 2

Share All sharing options for: Return to average: The Pirates in Week 2

"I started having doubts right on top of my certainty." ― David James Duncan, The Brothers K

The well-worn metaphor which equates watching a baseball season unfold to reading a novel is so overused that it’s almost become trite and uninteresting. Yet every year I cannot help but to appreciate how one of the great joys of summer is getting caught up in the daily unwinding of the season's narrative. It does very much feel like my summer reading is baseball.

And, for those of us that wait all winter for it, the season hooks and draws us in immediately, doesn't it? No matter how calmly and rationally we spend our hibernating months studying projections and calibrating our expectations for the season ahead, the month of April almost immediately reveals unexpected and jarring plot twists that make us question our winter's work.

For some of us, this is exactly what makes being a baseball fan so rewarding. Willingly suspending disbelief and silencing the cold, calculating mind of winter - the mindset that knows better than investing too much stock in small sample sizes – is, well, just plain fun. This is baseball, this is a hobby, getting "caught up" is the point. It is a rite of April.

On the other hand, there is not much fun in being misled, and things stop making sense when we allow ourselves to be swept away by the visceral. Indeed, if we aren’t careful we may find ourselves holding extreme or incompatible positions which we later regret. Getting too caught up April’s plot lines can be disorienting, if not embarrassing.

Moderation and temperance, Aristotle observed, are the keys to a happy life. So too for the happiness of a baseball fan, I believe.

Allowing oneself the freedom to fully celebrate the roller coaster of twisting plot lines of April is an essential part of the joy of being a baseball fan. But, there is also a subtle pleasure in keeping one eye on telling patterns that are slowly emerging out of the noise of small sample sizes. Sometimes the universe hiccups, creating wild variations in the short term. Peering through fog in search of something that is firm and predictive in the long term is satisfying in its own way.

All of that was really just to say this:

Now, to this week’s "Return to Average" graphs, which are followed by a small study involving Win Probability Added. (Go here for an explanation of why and how we are tracking the Return to Average numbers.)

The Pirates' offense dramatically increased its running scoring this week (5.33 RS/G). The spike in the blue line shows this.

The offensive breakout helped to bring the season run scoring average (red line) much closer to the league average scoring (purple line). At the end of the season, it is gap between these two lines that will be most important. Currently the Pirates are -1.04 runs scored per game below league average. Last week the gap was -2.94.

Finally, the Pirates are ahead of last season’s pace (green line) by 1.16 RS/G. 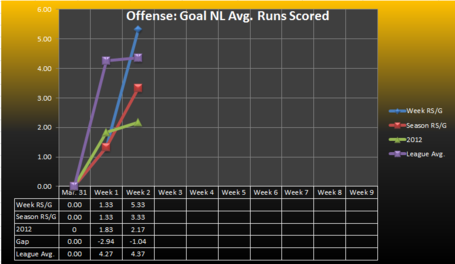 The Pirates pitching/defense gave up dramatically more runs this week (5.33 RS/G). The spike in the blue line shows this.

As a consequence, the season runs allowed average (red line) moved much closer to the 90% league average scoring (purple line). (Again for an explanation of why we are holding league runs allowed at 90 percent, please go here.) At the end of the season, it is gap between these two lines that will be most important. Currently the Pirates are .02 runs allowed per game above league average. Last week the gap was -1.19.

Finally, the Pirates are behind last season’s pace (green line) by .91 RA/G. 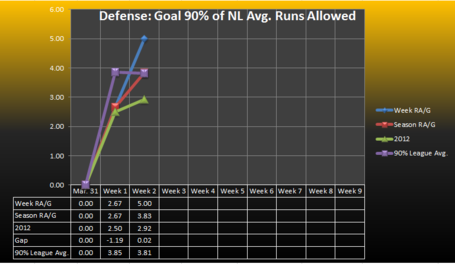 Note: all league averages are calculated without the Pirates.

In Saturday night's game vs. Reds, the Pirates' bullpen held the Reds offense scoreless for the final four innings of the game, thus preserving a 3-1 win. We can correctly describe the victory as a "bullpen win". In other words, the bullpen deserves the lion's share of the credit for winning the game.

Already over the course of first 12 games of the season we have seen games in which the starting pitching has carried the team, or given them little chance. Obviously, the same is true for the offense. After Sunday afternoon’s thrilling comeback victory against the Reds, I started thinking about how many games we could describe as offensive, starting pitching or bullpen wins this season. There is a statistic that that can help us answer that question: Win Probability Added (WPA).

Basically, WPA calculates how much each event in a baseball game adds or subtracts to the probability of winning the game. It then credits the change in probability to the players involved. It is a great storytelling stat, but has very little predictive value. Here is an example of how WPA works taken directly from Fangraphs.com:

WPA is scaled from .5 to -.5. At the start of the game each team has a 50 percent chance of winning, so WPA is 0. At the end of each game, the winning team will have an aggregate .5 WPA spread across its players, and the losing team a -.5. So, for example, in Sunday’s game Pirates' hitters contributed .886 WPA, and the Phil Irwin subtracted -.317 WPA. The offense is credited with .886 wins, clearly a very large amount and an offensive win. 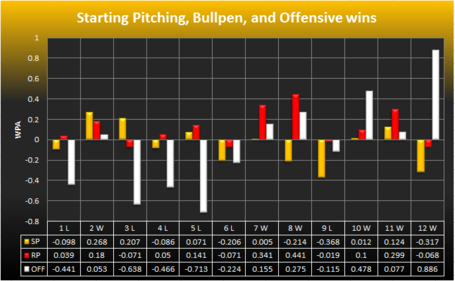 Observations: The results really highlight the Pirates offensive slump and its contribution to losing over the first six games. The excellent performance by the bullpen in games 7, 8 and 11 are also well represented. Now for some totals:

So far, the bullpen has contributed the most aggregate wins (1 point of WPA = 1 win). The starting pitching has tanked three times, but was rescued once by the bullpen (game 7) and once by an offensive outburst (game 12). Finally, in four of the Pirates six wins they have received positive contributions from all three facets of the team. In two of their six losses they received negative contributions from all three.

WPA provides us with another way to track the storylines of the 2013 season. Over the course of the season I may update these tables from time to time.

That is it for now. Enjoy the games this week as the Pirates play three games at home against the Cardinals before the Braves come to town for four.

Consider following me on Twitter @davidmanel and Bucs Dugout @Bucsdugout.