The Pittsburgh Pirates in Week 3

Share All sharing options for: The Pittsburgh Pirates in Week 3

It's been a busy week for us at Bucs Dugout. Last Monday (April 15) was the first game for which the site had press access. We were able to cover all six games during the homestand and I hope you found it to be a nice addition to our coverage of the Pirates.

Between the time spent at the park and my job, however, I was unable to devote much time to this weekly update. So, I apologize for that ahead of time.

Below you will find the updated "Return to Average" graphs. (An explanation of why we are following these numbers and why run prevention is traceked at 90 percent is here.) I have also updated last week's "Offensive Wins, Starting Pitching Wins, Relief Pitching Wins." Finally, I've included an interesting little statistic I found while poking around BaseballReference.com.

I have tried to explain my feelings about my experience at PNC Park to family and friends throughout the week. Unfortunately, I haven't been able to come with anything more interesting than what you would imagine someone who loves baseball would say when given such an opportunity. ("Thrill", "Dream" etc.)

Yesterday evening as I looked over an emptied PNC Park and prepared to leave, I scribbled down the following two observations in my notebook. I think they come about as close as I can get to expressing what I felt without writing a long post.

"If little twelve year old David Manel had been told that thirty years later he'd have a week like the 42 year old me just had, he wouldn't have been able to wait to get older."

"This was exactly like having that one thing that you've always wanted to happen in your life, but never really thought would happen, actually happen. And there was no let down. It was precisely as cool as you would want that one thing to be."

As the season moves on, I hope we're able to continue our coverage because it is nothing short of joy to provide it.

However, the team's run scoring average increased (red line), moving closer to league average scoring (purple line). At the end of the season, it is gap between these two lines that will be most important. Currently the Pirates are -0.48 runs scored per game below league average.

Finally, the Pirates are ahead of last season's pace (green line) by 1.50 RS/G. 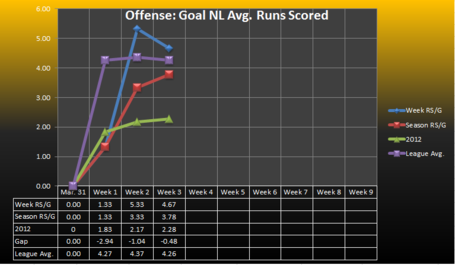 The Pirates' pitching/defense gave up fewer runs per game this week (3.33 RS/G from 5.00 RS/G last week). The blue line shows this.

As a consequence, the season runs allowed average (red line) moved below the 90% league average scoring (purple line). (Again, an explanation of why we are holding league runs allowed at 90 percent, please is here.) At the end of the season, it is gap between these two lines that will be most important. Currently the Pirates are -0.13 runs allowed per game below 90% of league average. That's a good thing.

Finally, the Pirates are behind last season's pace (green line) by 0.84 RA/G. 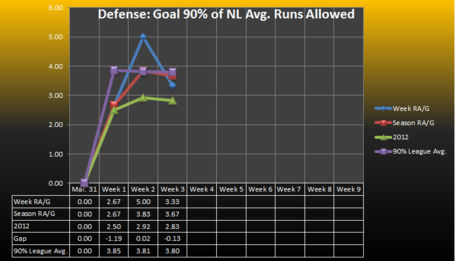 In last week's update I started tracking about how many games we could describe as offensive, starting pitching or bullpen wins/losses this season. The intuition was that since the starting pitching is going to be the wild card this season, it would be interesting to see how many games the starters contribute to a wins or losses compared to the other two facets of the team. To accomplish this I use Baseball Reference's Win Probability Added (WPA) statistic. A full explanation of WPA and this study can be found in "Pirates in Week 2" update found here. 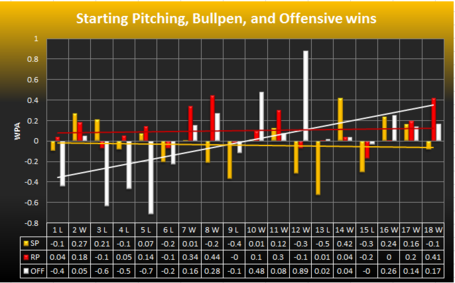 Game 13: James McDonald has a rough outing vs. the Cardinals

Game 15: Jeff Locke has a poor start against the Braves.

Game 18: Bullpen rescues the team as Sanchez struggles through only three innings.

As most of you know, for a long time sabermetricians have argued that stolen bases are attempted too often. The cost of an out exceeds the benefit gained from an extra base. A stolen base success rate below 75 percent is viewed as being detrimental to a team's offensive scoring.

However, I found that many of the teams that are considered the most sabermetrically inclined are in the top half of Major League Baseball in stolen base attempt percentage three weeks into the season (stolen base attempts / stolen base opportunities). Now this may be just a random thing caused by small sample sizes, or it could be sign of something else. It'll be interesting to monitor this over the course of the season and see if the trend continues.

(On Edit: As David Todd and JRoth correctly point out in the comment section, 75 percent success rate is no longer the cut off due to a declining run environment. It may be somewhere around 72 percent, or even 60 percent. Please see the comments below for a good discussion of this issue.

Also, on reflection, I’m not sure "sabermetrically-inclined teams" was the best choice of words (I shaded the teams that I thought belonged to this category, by the way). All front offices are sabermetrically-inclined these days, to some extent. I guess I meant those front offices that are seemingly the most "progressive" (is that the right word? maybe "aggressive" is better) in spotting inefficiencies. It is a purely subjective grouping of front offices on my part. What is interesting is that if this is not a blip caused by small samples, then perhaps the speed game is coming back (.53 SB/G in 2005, .66 SB/G 2012) and the teams that we (or I?) would expect to be ahead of the curve, are. On the other hand, Dave Cameron has just posted an article showing that attempts are down league wide so far this year. So, I guess where things stand right now is that the teams I selected as "ahead of curve" front offices are in the top half of the league in SB attempt rate, while SB attempts are down generally. It is something worth watching, I think.)

(Chart was cut off at "League Average" for space.) 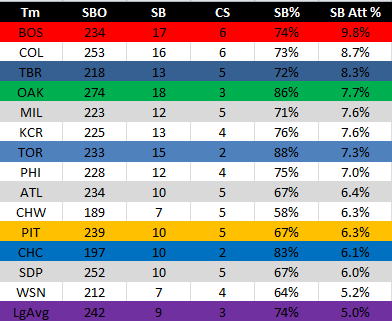 Notice how all the "sabermetric" teams are at about a 75 percent success rate except for the Pirates.

That is it for now. Enjoy the games this week as the Pirates play four games on the road against the Phillies before heading to St. Louis for three.

Consider following me on Twitter @DavidManel and Bucs Dugout @Bucsdugout.