The Pittsburgh Pirates in Week 4

Share All sharing options for: The Pittsburgh Pirates in Week 4

After stumbling out of the gate and posting a 1-5 record through the first six games, the Bucs have won 14 or their last 19 games and are alone in first place in the National League Central. They hold a half-game lead over St. Louis Cardinals. Last season the Pirates were not alone in first place until July 4, 2012.

The pressing topic for Pirates fans now is whether the winning is sustainable. We'll start to tackle that question in the coming days. However, as Charlie wrote on Sunday, there is nothing wrong with taking some time to enjoy watching this Pirates team play some excellent baseball. So for this week's update let's begin by looking at some the raw numbers behind the Pirates recent winning ways, then I will move on to the "Return to Average" and "Offensive Wins, Starting Pitching Wins, Relievers Wins" updates.

The large difference between the ERA and FIP numbers suggests that the Pirates defense (and some luck) is playing a role in keeping runs against down. Indeed, as of this evening the Pirates defense ranked first in Baseball Info Solutions Defensive Runs Saved, 15 runs saved; seventh in Fangraphs Ultimate Zone Rating, 10 runs saved; and fourth in Baseball Prospectus' Park Adjusted Defensive Efficiency, 3.19 (a PADE of 1 means that a team converts 1% more balls in play into outs than an average defense, given their park environment).

Last week Pirates manager Clint Hurdle joked that maybe next year the team wouldn't start Pedro Alvarez until after Tax Day. The comment was inspired by the fact that in the last two seasons the Bucs third basemen has had terrible pre-Tax Day starts:

Similarly, during the last two seasons from Tax Day forward over the next twelve games, Pedro Alvarez's numbers have increased substantially:

And Pedro isn't the only one who for whom Tax Day has served as something of turnaround day. Look at Russell Martin's numbers:

Finally, Garrett Jones needs special mention as part of the Pirates offensive outbreak. His hot streak coincides exactly with the Pirates run of 14 wins in 19 games.

To say that the Pirates bullpen has been anything short of superb would be an understatement. So far this season, Mark Melancon, Jason Grilli, Tony Watson and Justin Wilson have combined for:

If you are new to this series, here's a primer. It explains why we are tracking these numbers, and why run prevention is compared to 90 percent of league average.

However, the team's run scoring average increased (red line), moving closer to league average scoring (purple line). At the end of the season, it is gap between these two lines that will be most important. Currently, the Pirates are 0.19 runs scored per game below league average.

Finally, the Pirates are ahead of last season's pace (green line) by .98 RS/G. 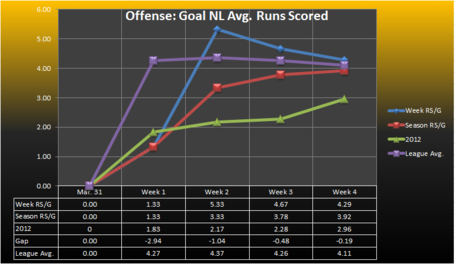 The Pirates' pitching/defense gave up fewer runs per game this week (3.14 RS/G from 3.33 RS/G last week). The blue line shows this.

As a consequence, the season runs allowed average (red line) remained below the 90% league average scoring (purple line). At the end of the season, it is gap between these two lines that will be most important. Currently, the Pirates are -0.18 runs allowed per game below 90% of league average. That's a good thing.

Finally, the Pirates are ahead last season's pace (green line) by -0.12 RA/G. 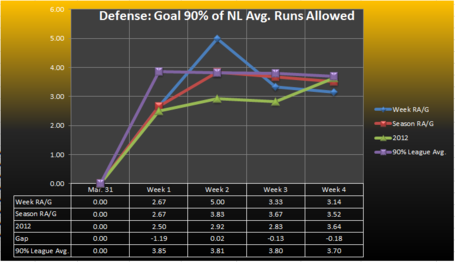 (All league averages are calculated without the Pirates.)

Two weeks ago I started tracking about how many games we could describe as offensive, starting pitching or bullpen wins/losses this season. The intuition was that since the starting pitching is going to be the wild card this season, it would be interesting to see how many games the starters contribute to a wins or losses, compared to the other two facets of the team. To accomplish this, I use Baseball Reference's Win Probability Added (WPA) statistic. A full explanation of WPA and this study can be found in "Pirates in Week 2" update found here.

Below is the updated WPA graph. The trend lines really highlight how the offense has turned around and contributed to winning. The starting pitching has improved very slightly, and the relief pitching has held nicely above average. 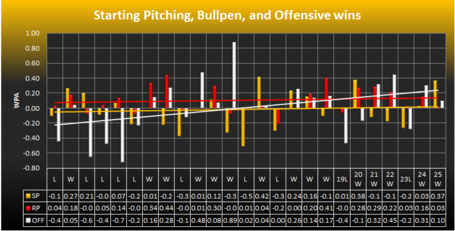 Game 19: A.J. Burnett only goes five innings. Hughes gets the loss. Offense only scores two runs vs. the Phils

Game 21: Wandy Rodriguez scuffles a bit. Melancon and Grilli close the door after Inge gets a PH-GWRBI

Game 22: Pirates take three of four from the Phillies. McDonald doesn't have a great start but the offense pulls the team through, scoring five runs total in the seventh and eighth innings.

The bullpen has made a positive contribution in 19 of 25 games. The starting pitchers have contributed to winning 13 times to 12 negative contributions. The offense has gotten the most credit for a win six times. In nine games all three facets of the team contributed positive WPAs. In two games Offense, SP, and RP all posted negative WPAs.

(Edit: in the table below the number in the cell Offense, Most Blame for Loss, should be 7. If you look at the bar chart above, you'll see that the white line is the most negative in seven of the Pirates' ten losses.)

That is it for now. Enjoy the games this week as the Pirates play three games on the road against the Brewers before returning home for three against the Nationals.

Consider following me on Twitter @DavidManel and Bucs Dugout @Bucsdugout.