Return to average: The Pirates in Week 1

Share All sharing options for: Return to average: The Pirates in Week 1

I was not quite sure that I was going to do this series of posts again this season, but with the Pirates' offensive struggles over the first six games, I just needed to see what the graphs would look like.

The idea of tracking the Pirates' offense and run prevention to league average grew out of my discovery of the following historical pattern:

If historical trends hold this season, in order for the Pirates to win 87 games and be in contention for postseason they are going to have to score more than a league average number of runs per game, OR score less than league average runs while holding runs allowed to somewhere close to/below 90 percent of league average.

Besides the implications for the Pirates postseason hopes, the Return to Average series is designed to provide an interesting way to visualize the rather bumpy ride that the Pirates have tended to experience over the course of the last few seasons.

Finally, most Return to Average posts will include one additional mini-study that reflects something that interested me while watching that week's slate of baseball games.

Now to this week's "interesting" numbers. 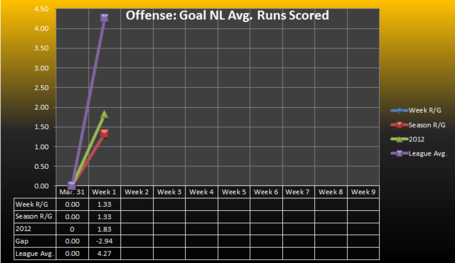 In the graph above:

The Pirates played six games this week and allowed 16 runs, 2.67 RA/G. They trail last season's pace for the first six games by .17 runs per game. However they are below current 90% of NL average RA/G by -1.19 runs. Indeed, they are giving up only 63 percent of the runs that an average NL team has thus far.

The lines in the table are the same as the one above, except they reflect RA/G. 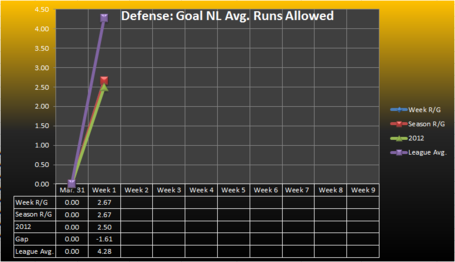 While watching Sunday's game against the Dodgers, I became interested in how Pirates hitters performed in what I am calling extreme counts (I'm sure there is a better term). By extreme counts, I mean both 3-0 and 0-2 counts. It seemed to me that the Pirates not only had a lot of them Sunday, but that they performed especially terribly in these counts.

After the game I went through the box score and found that Pirate hitters had nine 0-2 counts and four 3-0 counts. Of the nine 0-2 counts, the Pirates gained zero baserunners and struck out three times. The 3-0 counts resulted one walk, three outs and one strike out.

Curious as to MLB averages and the Pirates performance in comparison to these averages, I compiled the following data.

Everything is self-explanatory, except perhaps for PA%. PA% is simply the percentage of at bats in which hitters found themselves in these counts.

In 2012, about 20 percent of MLB plate appearances led to 0-2 counts. In 2012 the Pirates hitters faced a higher than average percentage of 0-2 counts, but hit for a higher OPS. Early in 2013, Pirates hitters have face a high rate of 0-2 counts and performed at a much lower OPS and high-K rate. This presumably is very much a reflection of the tough slate of starting pitchers the Pirates faced during the first week.

Finally after watching Pedro Alvarez find himself in two 0-2 counts on Sunday; I became curious about which hitters strikeout at the highest rate when they find themselves down 0-2. Below is a list of hitters with the highest K-rates. (Greater than 100 PA in 0-2 counts, 2012-2013.) As you can see, Pedro ranks 6th in this category. 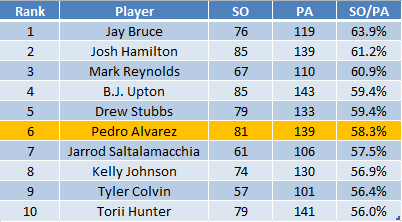 That is it for now. Enjoy the games this week as the Pirates play three games in Arizona against the Diamondbacks before returning home for a three game set vs. the Cincinnati Reds.

Consider following me on Twitter @davidmanel and Bucs Dugout @Bucsdugout