Based on my Twitter feed this morning, Pirates fans are suffering from regression anxiety. Some are bracing for what they see as the inevitable collapse. Others recognize that some of the numbers they are seeing are unsustainable, but hold to the belief that this year is "different." All of this is good. Or, at least, it is better than the alternative.

Besides the performances of Jeff Locke and Jeanmar Gomez, the focal point for everyone's anxiety is the bullpen. So far this year it has been nothing short of spectacular. Some numbers: 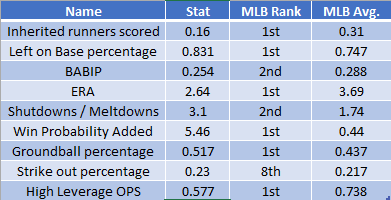 The Pirates pitching staff .577 OPS in high-leverage situations is the best since the 1968 Mets.

At their current pace, Pirates' pitchers would have the highest strand rate in 41 years, 77.7 percent.

At their current pace, Pirates bullpen would have the hightest strand rate in 100+ years 83.1 percent.

Some areas of concern going forward include a walk rate that is slightly above league average, 9.1 percent. A BABIP and LOB percentage that is probably unsustainable. And overuse, the Pirates bullpen is third in MLB in innings pitched and third in most outs per game of relief, 3.6. Most importantly, the Pirates have the largest negative difference between ERA (2.64) and FIP (3.54), -.90. If one just looks at peripherals (which FIP does), the Pirates bullpen ranks seventh in the majors.

In this post I am not concerned with the likelihood of the bullpen regressing. I think we all agree that is certain to regress. The extent and timing of the correction is what is most interesting and important.

No one can guess at timing. For the sake of minimizing the damage done to wins and losses, however, one would like to see a sharp and short bullpen regression that coincides with an offensive outburst. Or, perhaps a situation where both the offense and bullpen gradually move in opposite directions. In any case, the best scenario is one in which a bullpen regression is balanced out by something else.

When it comes to the extent of the regression, again that is a difficult gauge. We could look at various projection systems and make some estimates from that. That is worthwhile work, and something we'll probably return to in the future. However, Instead of going that route, what I'd like to do here is take a deeper look at the success, and likelihood of continued success, of the Pirates bullpen by employing a relatively new and interesting set of metrics that can be found at Fangraphs.

(Everything I'm going to talk about comes from this section of Fangraphs.)

By now most of us are familiar with the WAR (Wins Above Replacement) statistic. The centerpiece of how Fangraphs.com calculates WAR for pitchers is FIP (Fielding Independent Pitching). For our purposes all you have to know is that pitcher's WAR only reflects the things pitchers are believed to have most control over, i.e. walks, strikeouts, home runs. They do not reflect the actual number of runs, hits or types of balls in play allowed. The underlying idea is that since a pitcher shares the responsibility for hits and runs allowed with his defense, he should not be credited/debited for that in his WAR.

So, on Fangraphs each pitcher has a WAR that calculated without the effects of fielding mixed in. Therefore we can describe Fangraphs' WAR numbers as Fielding Independent.

Recently Fangraphs has added a separate calculation of pitchers WAR that does include those aspects that a pitcher shares with his fielders, RA9-Wins (see section I linked to above).

RA9-Wins is then broken down into its component parts:

FDP-Wins is broken down into the following:

LOB-Wins (Wins added/lost due to balls in play and runner stranding.)

The extent to which pitchers possess a unique, repeatable skill when it comes to balls in play or stranding runners is largely unknown. We do know, however, that to some extent these skills are shared with the defense and a product of luck.

Okay, so how does all of this pertain to the 2013 Pirates?

As of May 31, the Pirates bullpen has the best RA/9-Wins in Major League Baseball, 4.6 wins over replacement. The league median is 1.3 wins above replacement.

Of the 4.6 wins, only 1.4 is due to fielding independent numbers, or 30 percent. The rest (70 percent) is due to outcomes that are shared with position players, a certain type of "mentality," or fortunate sequencing. Here is the breakdown:

The first response to these results to say that the Pirates' bullpen has been lucky, to some extent. They are getting outs with men on base and fielding balls in play at uncommonly high rates.

However, it could be that pitchers like Melancon and Grilli have such good stuff this year that they are coaxing easily defensible balls in play. Additionally, it could be that the Pirates defense is just that good, and that it will remain that good. Currently the Pirates lead the Majors in defensive efficiency.

When it comes to LOB-Wins, it is possible that a certain type of "mentality" is playing a role here. I doubt that is what is happening, but it's possible. Pitchers like Jim Palmer and Tom Glavine seemed to show some repeatability when it came to FDP-wins generally, and LOB-wins specifically. However I don't think many of us are willing to confuse Tony Watson or Justin Wilson with Palmer or Glavine just yet.

Whatever the correct interpretation is, one thing is clear: the success of the Pirates bullpen thus far is due in no small part to variables that are not generally viewed to be repeatable skills that pitchers fully control. (edit: at least to the same degree as BB or K rates.)

A Look at Historically Strong Bullpens

Given the high percentage of RA9-Wins wins attributable to stranding runners and balls in play, I became curious about how common it was for a bullpen to survive a whole season putting up similar distribution of WAR, LOB, and BIP wins, while also posting an elite RA/9 number of wins.

3. Calculated each bullpen's distribution of WAR, LOB and BIP wins.

As you can see, the 1999 Reds bullpen profiles most like the current Pirates' distribution, with 63 percent of their RA9-Wins coming from stranding runners and balls in play. The 1982 Red Sox and 2012 Orioles are unique because those bullpens picked up such are large percentage of wins from stranding runners. The success of the top bullpen, the 2003 Los Angeles Dodgers, came largely from its excellent FIP, 2.93 (fourth-best since 1980).

Here is a table of the twelve teams that gained the least percentage of wins from fielding independent WAR:

Five out of the 96 elite bullpens (5.2 percent) have made it through a season with a total RA/9-Wins distribution similar to that of the current Pirates distribution.

Seven out of 96 elite bullpens (7.2 percent) have made it through a season with a WAR (fielding independent) that accounted for 30 percent or less of the bullpen's total RA9-Wins.

28 out the 96 elite bullpens (29.1 percent) have made it through a season with LOB-Wins that accounted for 30 percent or more of the bullpen's total RA9-Wins.

21 out of 96 elite bullpens (22 percent) have made it through a season with BIP-Wins that accounted for 30 percent or more of the bullpen's total RA9-Wins.

So all of this leads to the following conclusion, which many of us already suspected: it is highly unlikely the Pirates bullpen will make it through the season as an elite bullpen if it continues to rely on a historically high strand rate and an uncommonly low balls in play average. Not impossible certainly, especially since the defense seems to be very good, but it is unlikely.

To continue its dominating pace the best thing we could see in terms of the numbers is a ballooning strikeout percentage and a shrinking walk and home run per fly ball percentage. That is the path towards sustainability.

The Pirates have 54 games in their pocket, and it has been nothing short of exhilarating for their long-suffering fanbase. However, we all know the bullpen is the soft spot in terms of possible regression. And, now, hopefully, we all have a sense of the tenuous foundation upon which the current bullpen success is built. Nothing here is meant to diminish what has happened. It is only meant to make clear the likelihood of it continuing.

As always, please support sites like fangraphs.com, baseballprospectus.com and baseballreference.com, without which none of this research would be possible.