Baseball cards and the distant past

Share All sharing options for: Baseball cards and the distant past

I'm supposed to write about my favorite player of the 1980s. I started collecting baseball cards in the latter half of the '80s, but I was really young then, and the Pirates were mostly bad, and I don't have a specific memory of a favorite player until ... maybe the late '80s, when it was Bobby Bonilla. I also remember mailing autograph requests to players without really knowing how to do it -- I didn't send a SASE (which stands for self-addressed stamped envelope, for those of you who grew up in the age of email). The only player to send an autograph back was Fernando Valenzuela, which was awesome of him.

But what can we do with such things? These are childhood things. I don't remember them much better than I remember the piles of books about dinosaurs I read when I was seven. In this post, I'm permitted to use an image from a Topps card from 1982, 1983 or 1985, which are years I really don't remember, and are part of a time period that seems, a generation later, bizarre and foreign. I do not understand the fashions, such as they were, but the most notable aspect of baseball cards from this period is that the players do not seem particularly aware of what to do when a camera is pointed at them. See, look at this: 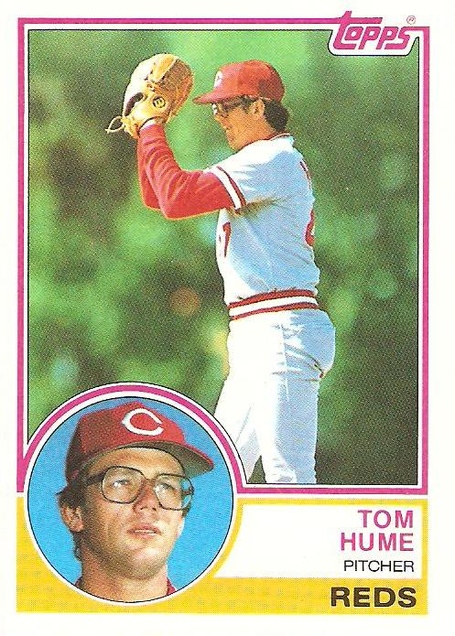 Someone who had some sort of awareness of what was happening around them in 1983 will have to explain this to me. I doubt Tom Hume looks significantly older now than he did then. This guy seems to be totally unaware that his clunky glasses and his half-there grandpa stare aren't going to help him get endorsement contracts.

Obviously, many fans have a considerable amount of nostalgia for baseball cards in the 1980s and 1990s, and that's primarily because those time periods remind many of us of our childhoods. But I also think it's because these were times when a baseball player with a camera trained on him didn't really know how to react to it. These players mostly weren't millionaires. They couldn't Google themselves. And a lot of them looked like shoe salesmen. In today's media-savvy age, that seems really strange, and kind of wonderful.

Topps Archives Baseball is a celebration of the 70s, 80s and 90s, what many consider to be the glory years of card collecting. If you collected Topps Baseball Cards during these years then you will love Topps Archives Baseball. Look for autographs and memorabilia cards from today’s stars and your favorite retired players on classic Topps card designs.