#Hurdled: Are the Pirates sacrificing more than average?

If you buy something from an SB Nation link, Vox Media may earn a commission. See our ethics statement.

Share All sharing options for: #Hurdled: Are the Pirates sacrificing more than average?

One of my first posts for this site was titled #Hurdled: The Pittsburgh Pirates and Sacrifice Bunts. The piece was written in May of last season in response to the ongoing frustration that Pirates' fans were expressing with what they thought were manager Clint Hurdle's overuse of the sacrifice bunt. Over the course of the last week the issue has reemerged as a topic of conversation, as the Pirates attempted two tactically questionable sacrifices in the just completed series vs. the Reds. In light of some of the recent discussion I've decided to update last season's study, with some additions.

One of the consequences of the increasing interest in sabermetrics is that most baseball fans now believe that sacrifice bunts are almost always a waste of an out. With the exception of having the pitcher bunt, in most cases the additional base is not worth the loss of an out.

Without getting too deep into the research in this area, much of the argument against attempting sacrifices comes from run expectancy and one run probability calculations. Run expectancy tables like the one found here show us the number of runs that a team is expected to score given the base/out situation. For example, with a runner on 1st, no outs, an average team is expected to score .827 runs. If you change the base-out situation to runner on 2nd, 1 out, the run expectation drops to .651. From this information one can conclude that since a bunt lowers run expectation, it is almost always a bad tactic.

But, what if a team is more concerned than average with making sure they score at least one run? In other words, a team is playing small ball, and willing to sacrifice the likelihood of scoring multiple runs in order to secure the one run they covet. This is a particularly interesting scenario for the 2013 Pirates given the effectiveness of their bullpen. Indeed, after a game I covered for Bucs Dugout earlier this season Clint Hurdle confirmed that the performance of Melancon and Grilli has indeed changed some of his tactics and made him more likely to pursue a one run strategy.

In cases where teams are looking to score one run the calculation is a bit different. Instead of looking at run expectation we're more interested in the probability of scoring one run. An example of one run probability table can be found here. (I like the linked probability table because it reflects the run environment from 1977-1992, which is more reflective of the current run environment than calculations from the early 2000s.)

However, things become much more complicated very quickly. First of all, it is important to note that not all hitters are average. The expectancy and probability calculations assume average hitters. The sequences of hitters that are due up in a given situation may change the calculations and sometimes tip things in favor of bunting. To this point, in "The Book: Playing the Percentages in Baseball," Tom Tango writes:

In an average run environment, and not considering the bunting proficiency or speed of the batter, or the speed of the runner on first, if the batter has an expected wOBA of less than .300, 44 points less than the league average, he can attempt a sacrifice bunt, even if the defense is expecting one. (Pg. 260)

Additionally, the anticipated run environment is an important variable. The more a manager believes that a game is going to be low-scoring (because of the quality of pitchers or because of weather or park conditions), the more attempting a sacrifice becomes a viable and acceptable tactic. Again, Tom Tango on this topic:

The last sentence of the quote brings me to a critical point: not all sacrifice bunt attempts lead to outs. Exchanging outs for bases is always a bad idea. But when you factor in that some attempts result in hits or errors (about 15 percent), the scales tip a bit. Indeed, both run expectancy and win expectancy from an attempted bunt (because there is probability of a hit/error) are much higher than simply calculating an exchange of an out for base. Tom Tango:

In fact, if a batter is a weak enough hitter, or the run environment low enough, a bunt attempt yields an RE or WE higher than swinging away. Even with a good hitter at the plate, if the defense is not expecting a bunt, a sacrifice bunt usually yields almost the same RE as swing away, and sometimes it is higher. (pg. 261)

Finally, at the very least, an attempted bunt puts pressure on the defense. A team with a reputation for bunting may force the opposing defense to shift its alignment (i.e. not employ a shift, or pinch in their third basemen), which may open up more holes in the defense as a whole. Somewhat to this point, Bill James has noted that he "would certainly signal a bunt with a good bunter against a poor third baseman." (quotation from "Baseball Between the Numbers," pg. 132).

In sum, the sacrifice bunt issue is not necessarily as black-and-white as it is sometimes depicted. A much more nuanced view of the tactic is called for than is generally appreciated. While I still prefer less bunting to more, I think it's important that we recognize that baseball researchers have not concluded that sacrifice bunts are always wasted opportunities.

With all that said, let's move to the data and see how Clint Hurdle compares to the rest of the league in his use of sacrifice bunts.

Using Play Index at BaseballReference.com, I calculated the rate of attempted sacrifice bunts in the following situations:

For each scenario I looked at the 2013 Pirates, the 2012 Pirates, the National League and Major League Baseball. (NL averages exclude the Pirates) 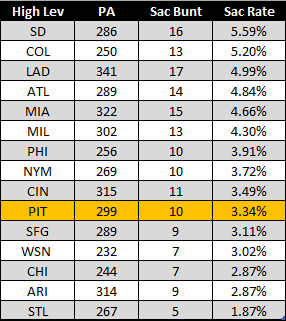 The Pirates are on pace to attempt a lower rate of sacrifice bunts in high leverage situations than they were a year ago. They are also below National League and MLB averages. Overall, they rank 10th in the National League. 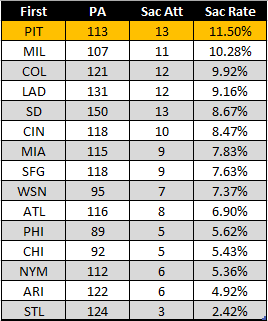 Runner on second / first and second, no outs, game within three runs, non-pitcher 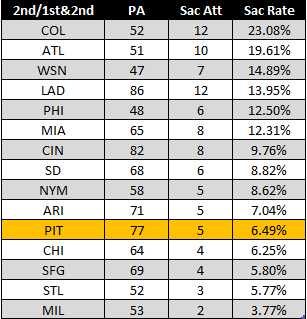 Runners on first / first and second / second, no outs, game within one run or tied, non-pitcher 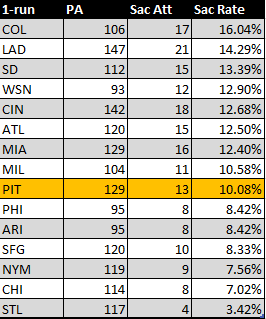 In most situations the Pirates are attempting sacrifices at a lower rate than last season, and below league averages. However, they are noticeably bunting much more with runners on first, no outs. I'm tempted to say this is evidence of an increase in small-ball tactics, as it seems to fall in line with the quotes I cited from Tom Tango above. That is, Clint Hurdle does view most of the games the Pirates are playing as low-run environments in which bunting runners over to second is not a terrible tactic. Perhaps the Pirates use of the tactic is appropriate given the run environments they are playing in.

That being said, what I can't explain why we don't see similar high rates across the board. Indeed, in the other base/out situations the simple run expectancy and one run probability calculations are friendlier to attempting sacrifices. One explanation may have to do with lineup sequencing. Perhaps the Pirates are finding themselves with their sluggers up more often with runners on second, or first and second, than other teams. Answering that question will take more research, which we can revisit later in the season.