The two teams with the two best records in baseball, the St. Louis Cardinals and Pittsburgh Pirates, are on trajectories to set records in statistical categories that are intimately tied to winning, but which are not generally viewed as tied to skill sets that are repeatable. In other words they are areas in which we would expect both teams to regress, perhaps significantly.

The St. Louis Cardinals hitters are on pace to post the highest batting averages in the history of each of the following three categories (statistics tracked since 1945): (1) runners in scoring position (RISP); (2) two-out RISP; and (3) high leverage situations.

The Pittsburgh Pirates pitchers are on pace to allow historically low batting averages in the same three categories (since 1945): (1) seventh lowest RISP; (2) sixth lowest two-out RISP; and (3) 3rd lowest average against in high leverage situations. (At their current pace the Pirates would post the lowest batting averages since 1970, except two-out RISP where they trail the '84 Expos.)

With two outs and runners in scoring position, the Cardinals are batting .330. That is 16 points ahead of the current record, .314, held by the 1950 Red Sox.

In high leverage situations, the Cardinals are batting .324. That is 2 points ahead of the current record, .322, held by the 1998 Yankees.

Surprisingly, the Cardinals remarkable pace is being sustained by hitting noticeably better on the road than at home. This is the opposite of what we would expect given MLB averages.

To help us better visualize the scorching pace that the Cardinals are setting, I created the following bar charts which capture each National League team’s batting average in RISP and high leverage situations as of June 22. 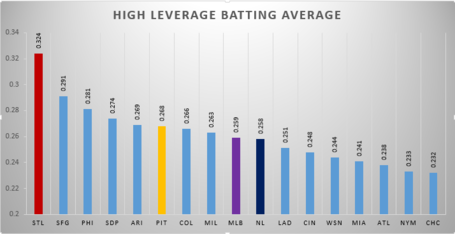 With runners in scoring position, the Pirates batting average against is .212. That is 31 points behind of the current record, .181, held by the 1946 Tigers. The Pirates currently rank seventh (first since 1968).

With 2 outs and runners in scoring position, the Pirates batting average against is .180. That is 30 points behind of the current record, .150, held by the 1946 Tigers. The Pirates currently rank sixth (first since 1984).

In high leverage situations, the Pirates batting average against is .205. That is 22 points behind of the current record, .183, held by the 1945 Yankees. The Pirates currently rank third (first since 1965).

Similar to the Cardinals, the Pirates pitchers are performing noticeably better on the road than at home. Again the opposite of what we’d expect given league averages.

Here are bar charts to help us visualize the Pirates' pace (June 22).

(Note: these tables should read "Batting Average Against". These are not the Pirates offensive numbers.)

According to Fangraph’s measure of Clutch, the Cardinals have gained 3.09 wins via their performance in high-leverage situations (fourth highest in MLB). Also, they have the most wins in the National League in games decided by four or more runs, 22. At the same time they have only hit 63 home runs, ten less than MLB average. It would appear, then, that the combination of clutch hitting plus overall excellent hitting with runners in scoring position (which is not the same as clutch) have played significant roles in the Cardinals scoring the most runs in the National League and posting the best record in baseball thus far.

Nothing says these numbers have to regress, as the Baltimore Orioles showed us last year, but it is highly likely. Unless something is happening that can’t be accounted for, one would expect some regression over the next 90 games. When (if) they return to more historically normal levels, the fates of these two teams will be decided by how well they offset the loss of production with gains in other areas.

(EDIT: As others have pointed out, the good news for the Pirates is that while their RISP-against is due for regression so is their offensive RISP. They could balance each other out nicely. The Cardinals are only clearly due for one regression, going one way. Of course, none of this is written in stone. Just, what is likely to happen.)

As always, Baseball Reference was invaluable for this research.