"I say that a prince may be seen happy to-day and ruined to-morrow without having shown any change of disposition or character." - Machiavelli on Fortuna (luck) from The Prince

It's been three weeks since I posted the weekly run scoring and win probability added tables. The cause of the hiatus is a freak, yet recurring, "upper body injury," from which I'm now hopefully fully recovering.

The sudden injury happened precisely in the middle of a run of personal good fortune. Everything, and I mean everything, was going well. As I reflect on those halcyon days, it's funny how much of it seems attributable to luck, or fortuna. A interpersonal relationship emerged out of a chance, completely unlikely and out-of-character encounter. A professional opportunity took shape at the end of a string of causal events, the ultimate origins of which reside in an impulsive, spur of the moment decision made almost exactly a year and half ago. I could go on.

Now certainly there is a sense in which I made all the good stuff happen. Some underlying traits of mine made the good times possible. Call that variable my "true talent level." But at the same time things were going so abnormally well that it certainly seems in retrospect that something else was happening - let's just call it luck. And like all runs of good luck, one begins to wonder about its sustainability. In my case the luck ran out abruptly, with a literal and figurative collapse.

Seemingly from out of nowhere misfortune hit, and one of my lungs inexplicably collapsed. According to the doctors it has all the appearance in the world of just being a combination of underlying genes, bad timing and bad luck (i.e. combination of "true talent" genes and bad luck). When bad fortune like this strikes suddenly and from out of nowhere it flips your life world upside down, appearing on the scene precisely as Niccolo Machiavelli observed: as a "raging river, which when in flood overflows the plains, sweeping away trees and buildings, bearing away the soil from place to place; everything flies before it, all yield to its violence, without being able in any way to withstand..."

While I was experiencing wild variations and regressions around my personal mean, the Pittsburgh Pirates were going through an extraordinarily good 20-game stretch. Over the course of the last three weeks, the Bucs have gone 14-6, while only outscoring their opponents 61-53. That amounts to a Pythagorean record of 11.25 - 8.75. In other words, the Pirates have won nearly three more games than we would expect given the number runs scored and allowed.

For the season, the Pirates are four games above their Pythagorean, giving them have the highest "luck" number in Major League Baseball as calculated by baseballreference.com. Moreover, according to Baseball Prospectus "Second Order Win Percentage", a measure that calculates winning percentage based on a team's underlying offensive and pitching statistics, the Pirates' winning percentage is .075 above expectation, the largest positive difference in Major League Baseball.

So as we head into this week 10 of the season it worth noting one undeniable fact: at this point in the year the Pirates have won more games than their underlying numbers suggest they should have. Indeed, they've won more games above expectation than any other team in baseball. What should we make of this?

Well, this could be a good team going through a nice stretch of winning close games. Good teams that end with good records do this type of thing over the course of season. If they are a very good team, we should expect their underlying numbers to eventually fall in line with their record. This means that they'll need to put together more safe wins than we've seen so far.

On the other hand, this may be the team that most of us thought they were at the beginning of the season, i.e. a pedestrian .500 team, that is just having a nice, but ultimately unsustainable, little run. It could be simply an average team experiencing a period of good fortuna; a stretch of games that will be eventually balanced out by a run in the opposite direction.

If pressed, I still think the latter is the most likely scenario. To be sure this team appears a little deeper and a little better than some of the projections suggested. Moreover, they do have a bunch of wins in their pocket, so they really only need to be average the rest of the way in order to have a fine season. So it is likely they'll probably exceed expectations to some degree. But at the end of the day the Pirates bullpen will return to earth and when it does the pressure will be on the offense and the starting pitching to be solidly league average or above in order to win 90-plus games. I'm still not sure they have the talent for that.

Now to this week's updated numbers: 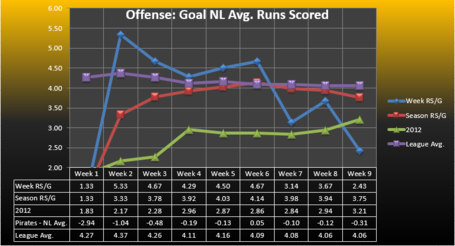 Since their worst run prevention week of the season in Week 5, the Pirates have posted four weeks of well below 90 percent of league average run prevention. 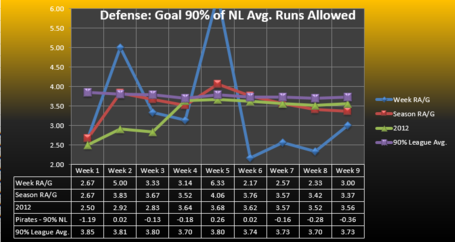 As measured by the statistic Win Probability Added, this week the starting pitchers contributed .11 wins above average and the bullpen 1.69 wins. The offense subtracted 1.30 wins. (Interpretation: If you add all the WPAs together you get .5 wins above average. The Pirates played seven games this week, making 3.5-3.5 a .500 record. So, .5 wins above average is equal to 4 wins (3.5 +. 5), or 4-3 record for the week. WPA explained.)

In Week 9, the bullpen deserved the most credit for three wins and the offense for one win. The offense deserved most of the blame for all three losses. The table below shows this week's WPA game scores: 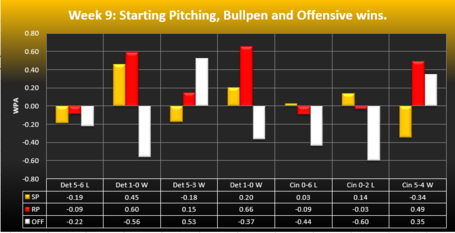 For the season the distribution of credit and blame for wins and losses breakdowns as follows: (A "positive/negative contribution" is credited/debited to each facet of the team after each game based on box score calculations supplied by baseballreference.com.)

Finally, all three facets of the team have contributed positive WPAs in a game 17 times (i.e. team wins). In seven games the starting pitching, bullpen and offense have all had negative contributions (i.e. team losses).

In the Week 6 update I posted a study that ranked Major League teams according to how "leverage-sensitive" they were in deploying their relief pitchers. (The original post is here. It includes a more detailed discussion of this topic and the full results.) One of the findings was that the Pirates were deploying their bullpen resources in a very leverage-insensitive manner. Indeed, they ranked second-to-last, ahead only of the Brewers.

In the original study leverage sensitivity was calculated by looking at the relationship between each pitcher's projected FIP statistic (ZiPS) and gmLI (entering leverage). The higher the correlation between low projected FIP and high entering the leverage, the more leverage sensitive the bullpen management. Here are the National League R-Squared scores from the Week 6 study: 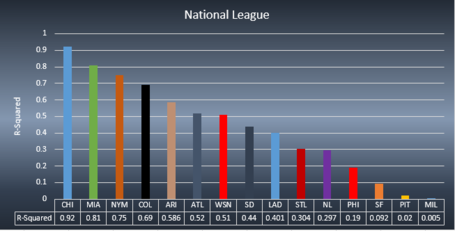 For this update, I make one important methodological adjustment. Instead of using preseason projected FIP, I now use updated ZiPS projections. This means the FIP projections have been re calibrated to reflect pitcher performances over the first third of the season. This adjustment provides us with a more context-sensitive way to study bullpen management.

Using this new methodology we see that the management of the Pirates bullpen appears to be much more leverage sensitive than it was in Week 6. However, this change is not simply due to a methodological change. As most Pirates fans have observed, Clint Hurdle has been much more leverage sensitive in deploying his bullpen resources lately and it is that apparent switch in tactics that shows up in the results. This is good news for those of us that found the previous results frustrating. (R-Squared .71. From left to right, the dots represent Grilli, Melancon, Hughes, Watson, Mazzaro, Morris, Wilson.) 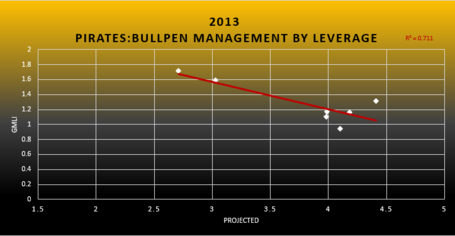 That is it for now. Enjoy the games this week as the Pirates take to the road to play three games in Atlanta and then a weekend three game series against the Cubs. Consider following me on Twitter @DavidManel and Bucs Dugout @Bucsdugout