A theoretical and historical look at the significance of a 37 - 26 record in terms of final record probabilities.

Share All sharing options for: The probable fate of a 37-26 team

The Pittsburgh Pirates are off to one of their best starts in franchise history. Since 1882, the Pirates/Alleghenys have posted a better record in the first 63 games just 19 times. Only five of those 19 occurred post-1940, with a plurality occurring during the dead-ball era.

The Pirates' fast start puts the team in a strong position to end the franchise's streak of 20 straight losing seasons. Whether they will win well beyond 81 games and contend for postseason is slowly becoming the more interesting question for Pirates fans.

However, there are some warning signs that the Pirates' early-season success may not be built on the strongest of foundations. For the season, the Pirates are four games above their Pythagorean, giving them have the highest "luck" number in Major League Baseball, as calculated by baseballreference.com. Moreover, according to Baseball Prospectus' "Second Order Win Percentage," a measure that calculates winning percentage based on a team's underlying offensive and pitching statistics, the Pirates' winning percentage is .091 above expectation, the largest positive difference in Major League Baseball.

In a previous post, I looked at the long term sustainability of the Pirates bullpen, as a way to get a handle on the Pirates' eventual fate. In this post, I largely leave analysis of the roster to the side and instead look at what the Pirates 37-26 record itself can tell us about what the future may hold. Specifically I ask three questions:

Before getting to the results, I should mention that the idea for this project came from re-reading Bill James 1985 Baseball Abstract this afternoon. I borrow much of his methodology to answer questions 1 and 3, though my data set and presentation are different.

Question 1: "What is the chance that a team destined to end the season with X wins and Y losses would start the season 37-26?"

We know that there is very little likelihood that a 69-win team would start the season 37-26. But what exactly is the probability that they would? The table below answers that question by using a binomial distribution calculator. 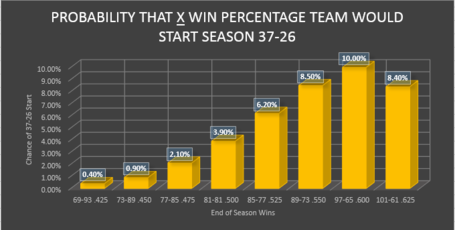 The table below is the same analysis with all win totals 70-100 included: 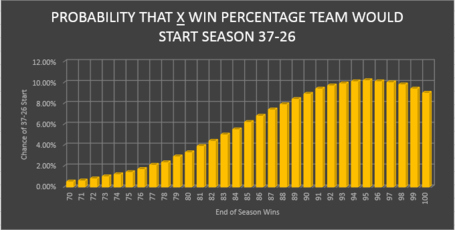 For the purposes of this experiment, let's assume that the Pirates' underlying statistics remain steady (a big assumption) and that whatever factors allowed them to perform 64 points above expectations for the first 63 games are not present in the next 99 games. In other words, let's hold performance constant and de-luck them for the next 99 games. Restated, the question is: What is the probability that a completely de-lucked, but in all other ways similar, Pirates team will win 54 or more of its next 99 games? (I include the 81-game threshold because of its obvious significance to Pirates fans.) 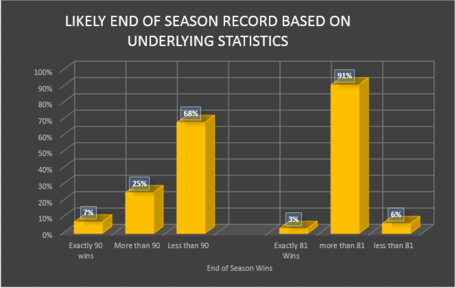 Interpretation: there is a 32 percent chance that the Pirates will win more than 90 games this season if luck plays no role and their underlying statistics remain steady. There is a 91 percent they will win more than 81 games given the same constraints. 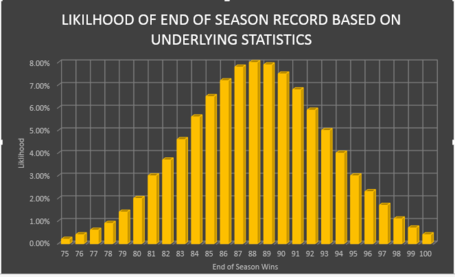 Conclusion: A completely de-lucked Pirates team that performs according to the same underlying statistics the rest of the season is most likely to win somewhere in the mid-80s number of games.

Leaving the world of theoretical mathematical probabilities behind, we now turn our attention to the actual fate of teams that have started the season 37-26.

Question 3: "Historically, what has been the fate of teams that start the season 37 -26?"

(The analysis starts in 1950 and excludes strike-shortened seasons.)

Below is the distribution of teams based on the number of wins above or below 91.45.

One team, the 1984 San Diego Padres, had the same run differential as the Pirates. The '84 Padres ended the season 92-70 and played the Detroit Tigers in the World Series.

Below is the distribution of run differentials for all 37 - 26 teams. The red bar is the '84 San Diego Padres, who share the same differential as the Pirates. 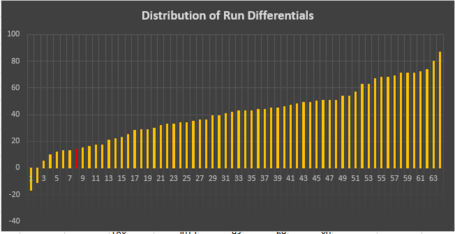 There are nine teams that posted 37 - 26 records and posted a run differential within four runs of the Pirates through 63 games. The aggregate end of season record for those nine teams is 785 - 656. That is a .545 winning percentage, or 88.25 wins over a 162-game schedule.

Conclusion: The most interesting result to me is that the average number of wins for teams that posted a similar run differential as the Pirates is 88.5. That number matches up perfectly with the number of wins that has highest probability in Question #2 above.

Based on their underlying statistics, mathematical probability and historical precedent, 88 wins appears to be a reasonable expectation for this team. At the very least, we can say that anything under 88 wins could be a disappointment in light of these findings.

As always, please support sites like fangraphs.com, baseballprospectus.com and baseballreference.com, without which none of this research would be possible.