I fell behind updating the "Return to Average" and "Win Probability" graphs because I was busy covering the Pirates at PNC Park and Wrigley Field the last few weeks. In what follows I attend to those updates along with a small feature looking at the Pirates' bullpen Shutdown and Meltdown numbers in historical perspective.

There's a lot to get to, so without further ado:

In addition to the implications for the Pirates' postseason hopes, the "Return to Average" series is mostly intended, and was originally designed, to simply provide an interesting way to visualize the very bumpy nature of run scoring and run prevention over the course of a season. The lines in the graph tell the story of the season in their own way. 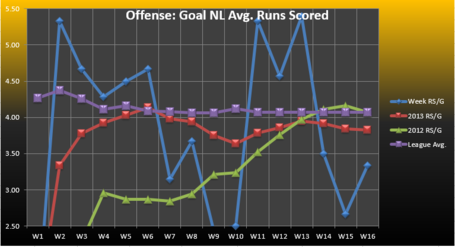 Tracking the red and green lines, we can see two things. First, the upward slope of the green line shows that the early season offensive catastrophe that the 2012 team suffered was long over by this point the season. Second, the intersection of the green and red lines shows that the 2012 offense eclipsed the 2013 Pirates offense about four weeks ago. The current gap is .25 runs per game between the two teams.

Finally, the blue line shows that the Pirates offense has spent three straight weeks scoring under National League average. The longest streak of below average scoring is four weeks, weeks 7 to 10.

The lines on the table are the same except that they represent runs allowed. (Remember the purple line represents 90 percent of league average runs allowed - so 10 percent lower than actual average.) 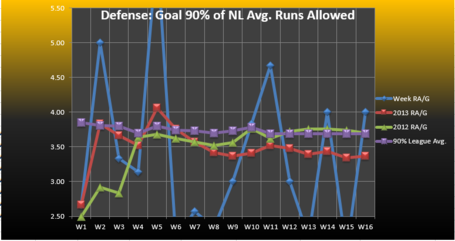 Tracking the green and red lines: for the last nine weeks, the run prevention of the 2013 team has been lower than the 2012 team. The spread between the two team is now .34.

Tracking the purple and red lines: for 10 straight weeks, the Pirates have been well below 90 percent of runs allowed per game. The current difference is .33.

The blue really dramatically shows how good the Pirates' run prevention has been some weeks. Four times they allowed less then 2.5 runs a game in a week.

Earlier this season I became curious about how many individual games Pirates' starting pitchers, relievers and offense had contributed to the winning or losing a game. To figure that out I started to keep a database of Win Probability Added (WPA) scores for each facet of the team, in each game played.

Overall, the bullpen has posted a positive WPA, i.e. contributed to winning, in 68 or the Pirates' 96 games (only 95 games are recorded because of Francisco Liriano's complete game).

The Pirates' offense has contributed to winning in slightly more than half the games played, 51 of 96 (54 percent); and has been most responsible in 72 percent of the Bucs' losses.

The Pirates starting pitchers have posted positive WPA scores in 56 percent of the games played.

* The table below shows the number of times that all three facets of the team contributed positive (Team Wins) and negative (Team losses) WPA scores.

Finally, the graph below shows the linear trendlines for each facet of the team. The starting pitching has been trending upwards (contributing more to winning) since about game 16; the bullpen has held relatively steady in terms of positive contributions; and the offense is moving in a negative direction. 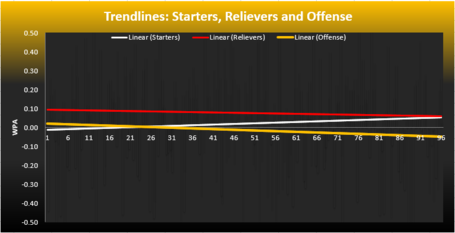 Basically, WPA calculates how much each event in a baseball game adds or subtracts to the probability of winning the game. It then credits the change in probability to the players involved. It is a great storytelling stat, but has very little predictive value. Here is an example of how WPA works taken directly from Fangraphs.com:

WPA is scaled from .5 to -.5. At the start of the game each team has a 50 percent chance of winning, so WPA is 0. At the end of each game, the winning team will have an aggregate .5 WPA spread across its players, and the losing team a -.5.

Pirates' bullpen "shutting them down"

If you've followed the Pirates closely this year it likely comes as no surprise to see that Pirates' relievers have contributed positive WPA scores in 68 games this season. The bullpen truly has been the backbone of this team.

In order to further appreciate the work that Pirates' relievers have done this year I looked at the bullpen's performance through the lens of two relatively new statistics developed by Fangraphs.com: "Shutdowns" / "Meltdowns."

Shutdowns (SD) and Meltdowns (MD) were first introduced by Fangraphs.com in May 2010 as substitutes for the flawed "Saves" and "Holds" metrics. SD and MD are based off of WPA (Win Probability Added), which I described above. The Shutdown and Meltdown metrics utilize WPA in the following way: (copied from Fangraphs)

"A Shutdown is when a reliever accumulates greater than or equal to 0.06 WPA in any individual game.

A Meltdown is when a reliever's WPA is less than or equal to -0.06 in any individual game."

In order to get a sense of how effective the Pirates bullpen has been I calculated what I am calling the "Shutdown Efficiency" of each team in the Fangraphs database. Shutdown efficiency is simply the number of shutdowns divided by meltdowns.

Interestingly, on July 21, 2012, the Pirates' bullpen was in a fairly similar situation. At that point in the season they had accumulated 92 shutdowns and 32 meltdowns, for a 2.88 ratio. After the late season collapse, the 2012 bullpen ended the season with 129 shutdowns, 63 meltdowns and a 2.04 ratio.

Here is a list of the historical top ten bullpens by shutdown efficiency: 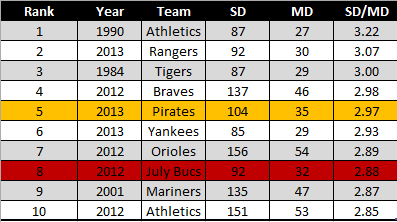 Here is the shutdown efficiency for each Pirates reliever: 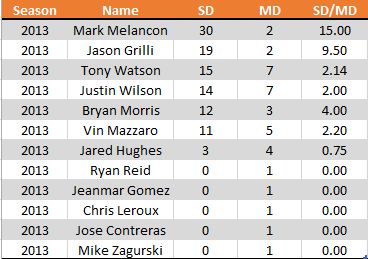 Melancon and Grilli have combined for a stunning 49 shutdowns, only 4 meltdowns, 12.2 ratio.

That's it for this week's update. I'll try to post another one next before covering the team again at PNC Park for the series with the Cardinals.