Share All sharing options for: How much do defense, high ground ball rate help Pirates win?

Pirates pitchers have the highest ground ball rate in the Major Leagues, 52.1 percent. In fact, they are currently on pace for the highest ground ball rate since 2002, the first year for which Fangraphs.com carries batted ball data. Moreover, Pirates' infield defenders have done an above-league-average job of turning ground balls into outs -- they rank eighth in the Major Leagues, with a .225 BABIP. The combination of high ground ball rate and strong defending against grounders has been an important part of the Pirates' run prevention success this year. But how important?

Approximately how many wins the Pirates have gained from the combination of a high ground ball rate plus solid infield defense?

In order to find the answer, I used a measure of team defense that I developed last year called Total Defense Tool (TDT). I have explained TDT in the past, so some of what follows is lifted from a previous post on this site.

"LW" in the equation refers to linear weight of each event. They are updated by Fangraphs.com yearly. (Notice that a separate wOBA coefficient is derived for each type of batted ball type, and they are park adjusted.) (For more on linear weights and wOBA, follow link.)

When the actual team totals for the 2013 season are plugged into the TDT formula, it churns out very accurate results. For the 2013 season, the TDT estimates a total of 7215 runs allowed by National League teams. The actual number of runs allowed is 7066 (a difference of 149 runs for 15 teams). The team-by-team correlation between predicted and actual runs scored is .97 and the R-squared is .93.

While TDT is not necessarily the most sophisticated run estimator (though it matches up very well with others), its greatest strength is its flexibility. By simply changing the combination of variables that are set to league-average, the impact of different skill sets can be isolated and compared.

(Important: The wOBA coefficients for batted ball types represent "range" and do not include errors. The reason is because the linear weight of a ground ball error is likely different from an error on a line drive. The weights for errors of different batted ball types was not available. Errors are included in a teams overall TDT-wOBA coefficient at the standard .92 rate.)

Here are the results with the actual offensive statistics against plugged into the formula for each National League team. The Pirates have gained 7.9 wins above average purely from their run prevention. They have gained the most wins from their run prevention in the National League. (wRAAA = weighted runs allowed above average. The Pirates have allowed 73.66 fewer weighted runs than average. Wins are based off of the current runs per win estimate of 9.323. So, -73.66 divided by 9.323.) 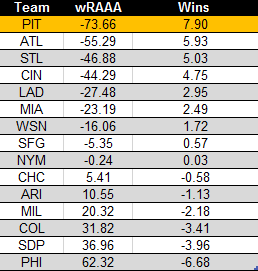 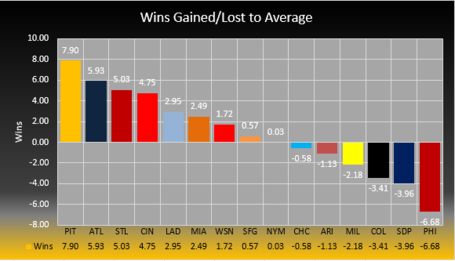 Now adjustments are made to the TDT formula to account for the following three hypotheticals.

In this scenario, we would expect the Pirates to have allowed 21 more runs, at the cost of two games. They still would have gained 5.56 additional wins above average from ground ball defensive efficiency (League Avg. Bucs, "Wins") plus other forms of run prevention (fly ball and line drive defense, strikeouts, etc.)

If their ground ball defense was merely league-average, we would expect the Pirates to have allowed almost 15 more runs at the cost of almost two games. However, they still would have gained 6.34 wins via ground ball rate and other forms of run prevention (i.e. fly ball and line drive defense, strikeouts, etc.).

What if the Pirates' pitchers had thrown an average rate of ground balls with an average infield defense behind them? (Ground ball rate and ground ball wOBA coefficient set to league-average.)

We would expect them to have allowed 33.82 more runs at the cost of 3.63 games. They still would be gaining 4.27 wins via their fly ball, line drive and strikeout run prevention.

According to the TDT calculator, the Pirates have gained almost four expected wins (3.63) by throwing ground balls and fielding them well. In other words, it is a combination that has served them well and, if it is sustainable, should continue to add wins in the future. If they were merely league-average in both these regards, they still would have gained four wins from other forms of run prevention.

TDT is a decontextualized statistic. Therefore it does not account for the "timing" of events. As such, these numbers represent the "expected" number of wins, not actual. In real life, the sequencing of events and luck plays an important role. However, it is largely taken for granted that the sequencing of events is somewhat random -- that, in other words, it's a phenomenon like "clutch" pitching or fielding are not really repeatable skills and are expected, given enough time, to flatten out. So, in sum, these numbers represent what we would expect given the rate of events that have occurred with the Pirates' in the field, and ignores the sequencing.

One issue with this method is that when you change the rates of batted ball types, plate appearances should be adjusted as well. More line drives will equal more hits, which will equal more plate appearances. However, I am not sure how to estimate that change, so this represents as close of an approximation as I can get right now.  I'm open to suggestions, however.

Special thanks to statcorner.com, fangraphs.com and baseballreference.com for much of the data used in this study.