2013 Pirates: A study of the cliche 'Everybody's contributing'

Share All sharing options for: 2013 Pirates: A study of the cliche 'Everybody's contributing'

After Thursday's stirring comeback victory against the Marlins, Clint Hurdle described the game as an "excellent team win," and his team's successful nine win, 11 game homestand as "based all around everybody contributing." Russell Martin, who provided the game-winning hit, said, "It's going to be somebody different everyday, it seems like."

The themes of "everybody contributing" and "a different player every day" are commonly found in the quotes of winning teams. Having spent the last 11 games around the Pirates, I can't tell you how many variations of this theme I heard in the clubhouse. This got me to wondering if there was a way to measure the actual amount of shared contribution a team receives and if the 2013 Pirates were indeed special in this regard. In other words, I wondered if I could find a number that would both capture and provide a way to compare the phenomenon of broad-based roster contribution. Below are my results from my first attempt to quantify this familiar theme.

My methodology was simple. I added the total number of positive individual contributions (as measured by Win Probability Added at .01 and up) all teams have received from all their players in every game they have played.

For example, in Thursday's game against the Marlins, 18 Pirate players received playing time. Of those 18 players, 11 contributed positive Win Probability Added (WPA) game scores. In other words, 11 players made positive contributions to the victory.

The intuition is that teams that receive more individual positive WPA game scores per game are teams in which there is more "chipping in," as it were, to winning.

I should note at the outset that at least one shortcoming with this approach is that WPA does not capture defensive contributions. 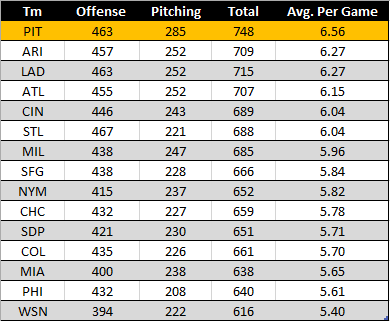 As you can see, the Pirates do indeed lead the National League in the average number of positive contributions per game.

The next table is the average number of individual positive contributions for all National League teams since 2000. The reason I did not go further back in time is because increased bullpen specialization in recent years has meant that significantly more relievers enter games today than they did, say, 30 years ago. 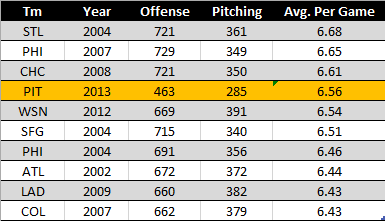 The 2013 Pirates are receiving the fourth-most average individual positive contributions since 2000.

The next table shows the teams that received the fewest average number of individual contributions since 2000. 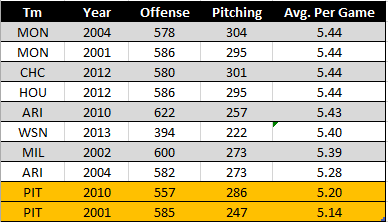 Since the Pirates bullpen (the "Shark Tank") has been so important to the team's success, I also looked at average positive contributions from relievers per game since 2000. 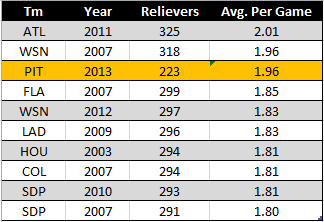 Finally, I decided to look at non-starting position players. The Pirates do not rank in the top 10 since 2000, but they do currently lead the National League. 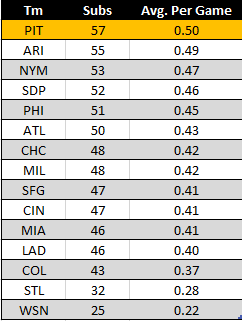 When Clint Hurdle and Pirates players say that this season's success has been a "team effort," they are speaking accurately. The average number of individual positive contributions per game for the 2013 Pirates is at historic levels.

Although the methodology used in this study has some limitations (primarily not accounting for defense), I do think it provides a nice first crack at quantifying the phenomenon of "different player, different day." As you would expect, teams with better records tend to receive a greater average number of individual positive contributions per game. Moreover, teams in the National League, post-2000s era, tend to have higher numbers generally, for the reasons I mentioned above. In the future, it would be interesting to find a way to account for the bullpen usage issue in order to expand the comparisons between leagues and across historical eras.

Once again, much thanks to baseballreference.com and fangraphs.com. Without their content, much of it free, none of this research would be possible.