Will the Pirates' position players improve in 2014?

Share All sharing options for: Will the Pirates' position players improve in 2014?

In today's Trib, Dejan Kovacevic writes that in order for the Pirates to exceed last year's performance, 2014 will need to be the "Year of the Bat." Dejan correctly observes that, since the pitching cannot "realistically" be much better than it was a year ago, any improvement will have to come from the offense.

Dejan's article got me thinking about the likelihood that the Pirates will receive increased production from their returning or acquired position players, generally. To find the answer, I ran the following test:

WAR/600 is simply a player's WAR (Win Above Replacement) scaled to 600 plate appearances. In other words, it is the WAR score we would expect if the player accumulated 600 plate appearances at the same level of performance as projected (or that he displayed in in the actual number of games in which he participated).

In my first test, I examined the projected change in performance of Pirates' position players to a year ago.

In the table below:

2013 = the player's WAR/600 score last season.
Projection = the projected WAR/600 for each player based on the average of the Steamer, Oliver and ZiPS projection systems.
Change = the difference between last year's performance and projections. 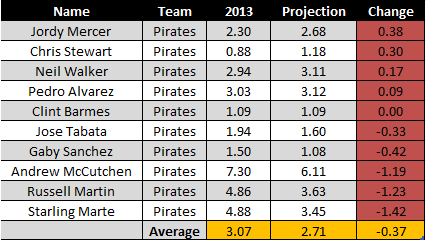 The following table displays the same analysis done for each team in the National League. 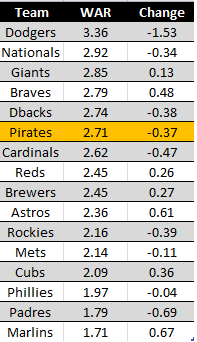 Pirates' position players rank in the top half of the league in terms of average WAR/600, but show more decline than most.

(A bar graph of the above data.) 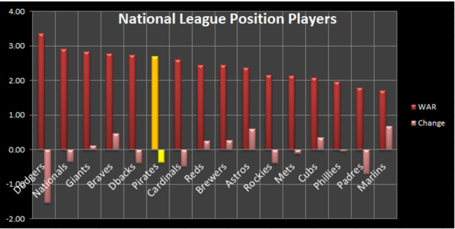 My second test was to look at 2014 projections compared to career numbers. More players are included in this sample, as I set the career plate appearance threshold at 200.

(Note some of the projection  data in this table are different from the one above. This is due to slight changes in the projections over the course of the two weeks in which I downloaded the data. The differences are small but worth mentioning.) 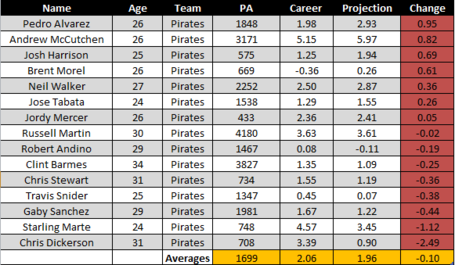 Here we see that Pedro Alvarez and Andrew McCutchen are projected to improve the most over their career WAR/600 numbers. Russell Martin is expected to return to his career average WAR/600, while Starling Marte and Chris Dickerson decline the most relative to their career marks. The average Pirates' position player is expected to decline by .10, but much of that is caused by Chris Dickerson.  Calculating the average change with just the Pirates core players - Alvarez, McCutchen, Walker, Mercer, Martin, Marte - yields a 1.04 improvement.

Once again, I calculated the averages for each team in the National League. I debated whether to include this data because it is not a great way to forecast a team's overall performance, since it equalizes playing time for all the players in a team's organization that have over 200 career plate appearances. However, I decided to publish it because it was interesting enough to me in the sense that it gives some indication of each organization's overall depth and performance trends. 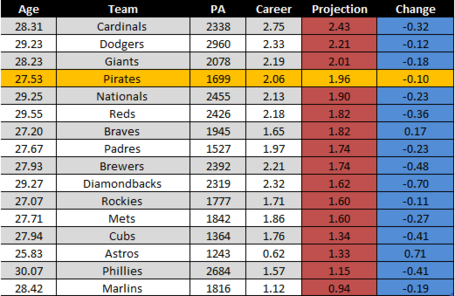 Once again the Pirates rank near the top of the league in terms of overall average WAR/600. Moreover, their slight decline ranks well compared to other teams - especially keeping in mind that Dickerson accounts for much of the loss.

(Bar chart of the above data) 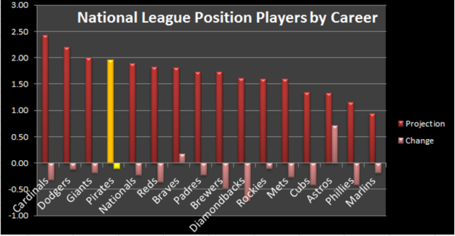 However, in comparison to last season, only Alvarez, Walker and Mercer are expected to show slight improvement; while Tabata, Sanchez, Martin, McCutchen, and Marte drop-off from last year's pace. The latter three show a fairly significant decline from 2013.

In sum, many of the Pirates' core position players are set to improve versus their career performance. However, it is not expected that McCutchen, Marte and Martin will repeat their special 2013 campaigns. If the projections are fairly close to accurate, then the Pirates position players as a group are not likely to improve significantly, if at all. In order to improve on last year, therefore, the Pirates will both need to receive big seasons from players with little or no Major League experience and their pitching will need to be somehow even better.