An early look at the Pirates' approach at the plate

Share All sharing options for: An early look at the Pirates' approach at the plate

Clint Hurdle frequently discusses the importance of hitters "staying stubborn with their approach." Over the course of the opening homestand he outlined three elements of approach, which he said the team worked on extensively during Spring Training:

Obviously, the Pirates are not unique in stressing these three aspects of hitting.  However, since Hurdle mentions them fairly frequently, and because they were areas of particular weakness in 2013, it is worth monitoring the Pirates' efforts to improve their approach this season.

Before looking at the numbers, here is the obligatory caveat about small sample sizes: We should not make too much of what appears to be the improved approach of Pirates' hitters this early in the season. It is likely that the numbers will change dramatically over the course of the next few months. This, then, is merely an early snapshot of what will be one of the important storylines this season.

There are many ways to measure plate discipline, but here I'm going to focus on the one that I find most compelling: O-Zone percentage.

O-Zone percentage is the percentage times that a hitter swings at pitches outside of the strike zone.

The Pirates are swinging at 5.5 percent less pitches out of the strike zone over the first eight games of the season, and rank in the top sixth of the MLB. Interestingly, the league O-Zone rate is down 2.2 percent. 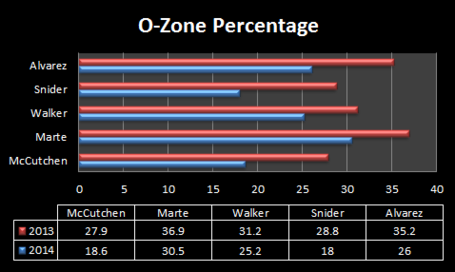 A number of important contributors to the Pirates' offense are displaying better discipline. But it's early!

To see how well the Pirates are hitting the curve, I used Fangraphs' pitch linear weight values. The pitch value indicates the number of runs above or below average the team is producing against the pitch.

Here again we see that the Pirates have shown solid improvement in their approach against the curveball through the first eight games.

Hitting the ball to all fields

They are still hitting the ball to the opposite field less than MLB average, but they make up for that difference by pulling less, and hitting it up the middle more.

It is so early in the season that I feel a little uncomfortable posting a study like this. However, the Pirates' hitting approach is already becoming a storyline, and it seems to be showing signs of improvement over last year. I am sure that we will revisit this issue throughout the season.

All the data used comes from Fangraphs.com and Baseballreference.com